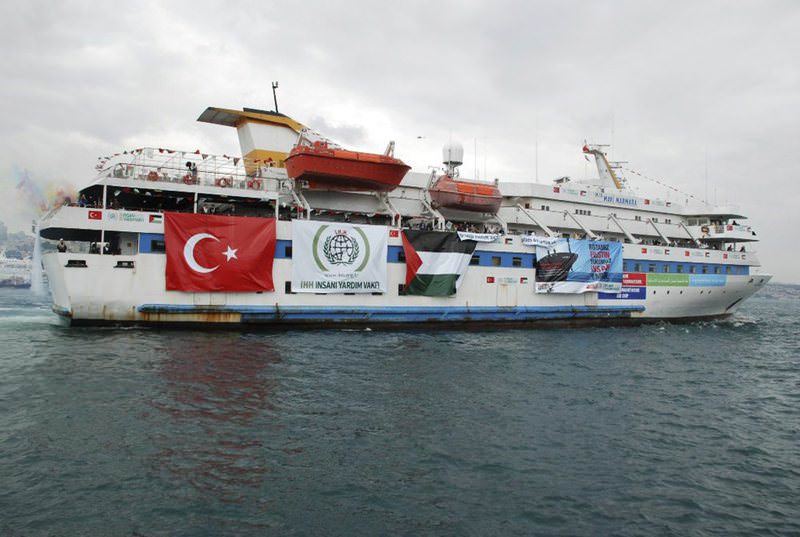 Dismissing the decision of the prosecutor to drop the Mavi Marmara case against Israel, a panel of ICC judges called for the reinvestigation of the case. A lawyer said he is certain an ICC trial will soon begin

International Criminal Court (ICC) judges have decided to order the reinvestigation of the Mavi Marmara raid case after prosecutors, who were previously probing the case, argued that there was no need to proceed to a trial. The judges decided that the complaint filed by Komor Islands, where the ship was registered, was valid and the prosecutors' decision not to proceed with the case should be readdressed. The judges also cited an appeals court decision to reject the arguments of the prosecutors.

The Mavi Marmara was the leading a flotilla of ships planning to deliver aid to the Gaza Strip when a raid on May 31, 2010 by Israeli special forces killed nine Turkish nationals and one Turkish-American dual national. One Turkish national, Uğur Süleyman Söylemez, died in the hospital in 2014 after being in a coma for almost four years. The raid caused relations between Turkey and Israel to nose-dive, which the U.S. has been trying to rescue ever since. The Turkish government has told Israel that unless Israel apologizes, pays compensation to the victims and lifts the blockade of the Gaza Strip there can be no improvement in ties. Israeli Prime Minister Benjamin Netanyahu in March 2013 apologized to then Prime Minister Recep Tayyip Erdoğan for the raid. However, the protracted negotiations over the amount of compensation to be paid to Turkish victims of the raid led nowhere. Israel agreed to increase reparations for the victims to $20 million and a draft of an agreement between the two states was written in February 2014. The countries also agreed that the Turkish Parliament would drop the lawsuits against Israeli soldiers that participated in the raid with a new law, Israeli newspaper Haaretz reported last year. However, Israeli leader Netanyahu delayed approving the agreement a couple of times, then left it in the freezer before the national elections in Israel last year. Foreign Minister Mevlüt Çavuşoğlu said earlier this year that the ball was still in Israel's court.

Turkey has launched a multi-pronged legal offensive against all those responsible for the raid. The ICC case was launched by the Humanitarian Relief Foundation (IHH), which was one of the leading organizers of the Mavi Marmara flotilla.

Ehud Barak, who was the Israeli Minister of Defense when Israeli commandos raided the Mavi Marmara, is also facing prosecution. Lawyers for the Mavi Marmara case have delivered the court file to Barak who was in the U.S. attending a conference. Former prime minister and defense minister will be tried in the U.S. as Furkan Doğan's family has filed a case with the Federal Court of California. Families of other victims will also be able to participate in the case. Barak is accused of deliberately killing Doğan, committing an international terrorist act, abuse, torture and arbitrary detention, according to the IHH.

It is expected that a case in Turkey will be the first of many such cases filed seeking to hold Israel criminally liable. The case against Israel is a public case and there are a total of 490 victims and complainants, including the relatives of the victims of the Mavi Marmara attack and those who were victimized by the attack for different reasons. Four Israeli high officials are being tried in absentia. At a hearing, Istanbul's 7th High Criminal Court had ordered the arrests of former Israeli Defense Forces (IDF) Chief of General Staff Gen. Gabi Ashkenazi, Naval Forces Commander Vice Adm. Eliezer Marom, military intelligence chief Maj. Gen. Amos Yadlin and Air Force Intelligence head Brig. Gen. Avishai Levi.

Israel has been implementing a blockade on the Gaza Strip, preventing the flow of basic humanitarian materials since the time Barak was minister of defense. More than 2,200 Palestinians, including hundreds of civilians, were killed and over 11,000 were injured in attacks on Gaza in 2014.

Last year, ICC Prosecutor Fatou Bensouda had noted that Israel had committed war crimes during the raid but the crime was not grave enough to warrant a trial at the ICC. A preliminary assessment of the prosecutor's decision was rejected on the grounds that mistakes were committed in coming to that decision. The ICC appeals court also said the crimes perpetrated warranted a trial in the ICC.

IHH's lawyer Uğur Yıldırım said he believed the court's decision meant that the trail would eventually begin. He also added that ICC trials took years to conclude but it was important to show that Israel could be tried for its conduct at a court.