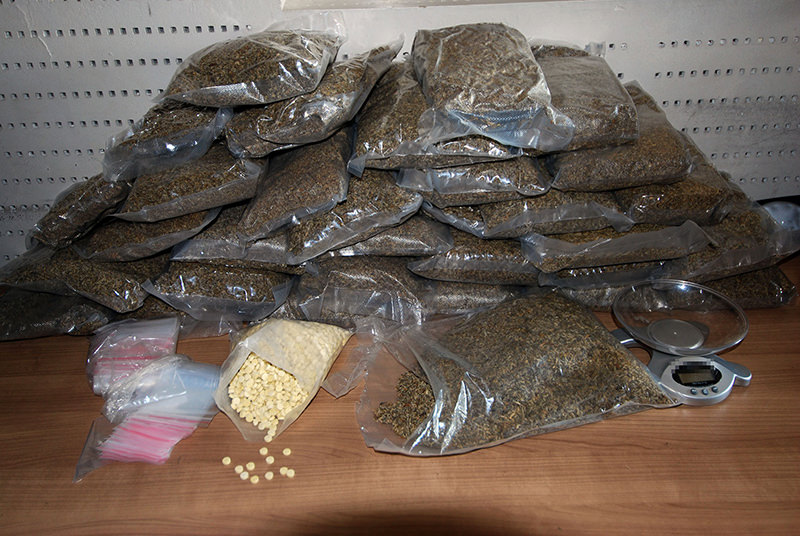 | DHA Photo
by Anadolu Agency
Nov 19, 2015 12:00 am
Istanbul police have released details of a major narcotics find, which has netted over 16 kilograms of a dangerous street drug dubbed "bonzai."

Anti-narcotics units raided a house in the city's Gaziosmanpaşa district yesterday morning, according to police sources.

Over 16 kilos of bonzai, together with more than 2,000 tablets of an unidentified controlled substance – plus packaging materials for the drugs – were seized during the raid, police said.

No details of any arrests were given.

Recently classified as the most dangerous drug in Turkey, bonzai is derived from a green plant similar to marijuana and contains a chemical called AM-2201, which can be particularly destructive to the brain.

Police teams are now searching for the owner of the property.

This is the latest high-profile drugs bust to be carried out by Istanbul police.

On Saturday, over 2,000 grams of hashish and an amount of cocaine, together with equipment used to prepare illegal drugs, were seized in the Sarıyer district of the city.

On Nov. 8, more big drugs finds were made in both Istanbul and the western province of Bursa, where around 35 kilograms of bonzai were seized.

In the last three months in Istanbul, over 70 suspects – accused of selling drugs like bonzai, cocaine, marijuana and heroin – have been arrested across the city.

The use of "synthetic marijuana" or "phenazepam" is spreading. According to one report, seizures of bonzai in 2011-2012 increased ninefold, while the number of individuals arrested for dealing and possession has dramatically increased in recent years.

This rise in drug use has spurred politicians into action. In June last year, Parliament passed legislation introducing harsher punishments for drug dealers, especially if their victims are minors.
Last Update: Nov 19, 2015 1:15 pm