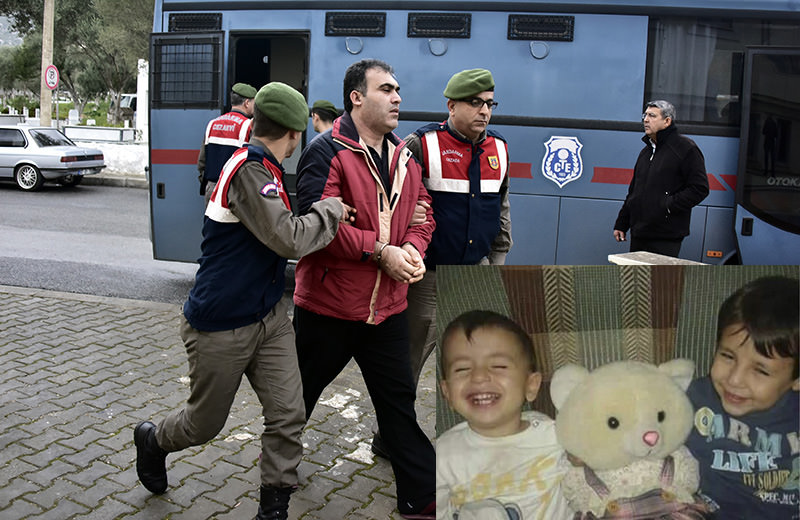 | DHA photo
by Compiled from Wire Services Feb 11, 2016 12:00 am
Two suspected smugglers from Syria appeared before a Turkish court on Thursday for a trial that may bring closure for Abdullah Kurdi, the father of 3-year-old Aylan Kurdi, a symbol of the plight of Syrian refugees taking risky journeys to Europe. The two men are accused of smuggling and causing death by gross negligence for the death of Aylan, his 5-year-old brother, Galib, his mother, Rihan, and two others.

Muwafaka Alabash and Asem al-Farhad were brought to a court in the southwestern province of Muğla's Bodrum district amid tight security. The court is located a few kilometers away from the beach where the body of Kurdi washed ashore. An iconic image showing his body lying face down on the beach and the body being carried by a gendarmerie officer sent shockwaves across the globe. A global emotional response prompted the international community to reconsider admitting more refugees from Syria who were forced to take deadly journeys by sea to Greece.

Kurdi was traveling with his late brother, mother and father when their rubber boat heading to the Greek island of Kos capsized on Sept. 2, 2015. His father, who buried Aylan in their hometown of Kobani in Syria, was not present at the first hearing of the trial.

A prosecutor is seeking prison terms of up to 35 years each for the two defendants for causing multiple deaths due to gross negligence and people smuggling. Six other suspects, including two Syrians and four Turkish nationals involved in people smuggling, remain at large.

Human smuggling thrives in Turkey, a transit route for migrants from Middle Eastern and Asian countries due to its location between Europe and Asia. The war in its southern neighbor, Syria, has made Turkey a favorite destination for migrants who use it as a launch pad for journeys to Europe. Most migrants prefer sea routes due to the proximity of the coast to the Greek islands while others prefer a land route from the northwest. Turkey plans to introduce heavier sentences for smuggling. The smuggling will be classified as an act of terror and organized crime. The move may help Turkey's crackdown against smugglers, which has seen the detention of 204 people accused of organizing illegal crossings across the Aegean Sea between Turkey and Greece since January 2015.
Last Update: Feb 11, 2016 8:33 pm
RELATED TOPICS