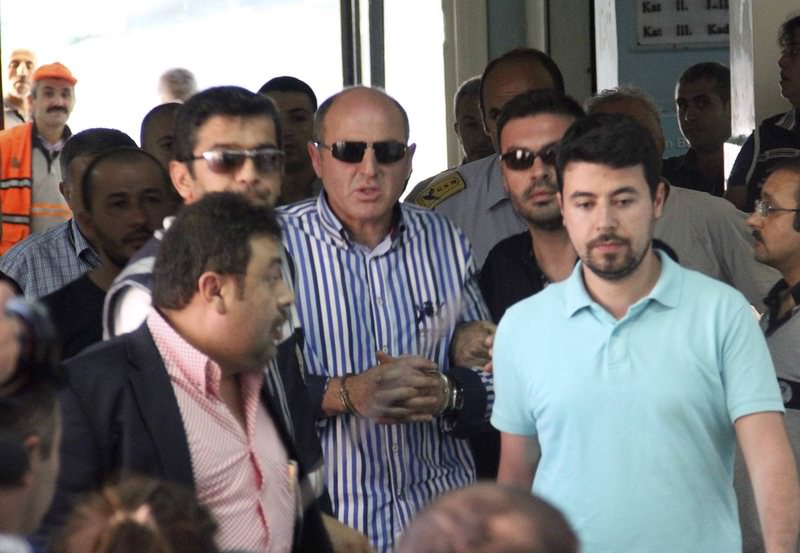 Ali Fuat Yu0131lmazer (C), a former police chief, is among the prominent defendants in the trial who are accused of wiretapping the phones of bureaucrats, journalists, celebrities, businesspeople and others.
by Daily Sabah Feb 16, 2016 12:00 am

The trial of 143 police officers, including 23 prominent police chiefs, began in Istanbul yesterday. The defendants are accused of having ties with the Gülenist Terror Organization and conducting illegal wiretapping on behalf of the group, which faces charges of attempts to oust the government

As Turkey's struggle to bring members and supporters of the controversial Gülen Movement to justice continues, 143 defendants, including former police chiefs, went on trial yesterday at an Istanbul court. Defendants, linked to the movement, are accused of conducting illegal wiretaps on hundreds of people and helping the movement to attempt to overthrow the government.

The Gülen Movement, led by the United States-based retired preacher Fethullah Gülen, faces charges of terrorism as several investigations branded the group's sympathizers as members of the Gülenist Terror Organization / Parallel State Structure (FETÖ / PDY). The FETÖ / PDY allegedly infiltrated into law enforcement and the judiciary, and police chiefs and judges close to the movement tried to imprison Cabinet members by implicating them through false, forged evidence.

Ali Fuat Yılmazer, a former high-ranking member of the police intelligence unit, and Erol Demirhan, who replaced him as head of the Istanbul Police's intelligence unit, are among dozens of names arrested in summer 2014 as part of efforts to purge the Gülenists' clout from within law enforcement. The two men appeared before the Istanbul 13th Court for the first time yesterday, along with police officers of various ranks in a trial for espionage and illegal wiretapping amid tight security measures. The Istanbul Chief Prosecutor's office presented an indictment to the court against Yılmazer and others. The defendants are accused of wiretapping the phones of hundreds of people despite the absence of a legal warrant, allegedly for the purposes of blackmail and to supply the information to the FETÖ / PDY.

The prosecutor is asking for aggravated life terms for all defendants on charges related to the alleged coup attempt. A long list of charges against Yılmazer range from founding and running a criminal organization, political or military espionage, forgery of official documents, violation of privacy of communications, illegal wiretapping, acquiring data illegally and defamation. The charges in total carry up to 1,000 years of prison terms.

Defendants allegedly conducted illegal wiretapping from 2008 to 2013, the years the Gülen Movement launched attempts to topple the government. The indictment says the defendants targeted "prominent public figures, journalists, bureaucrats and leaders of religious communities" and "sought to associate them with terrorist organizations or terrorism, and to wiretap them with false warrants." According to media reports, this is a common tactic of the Gülen Movement, as the group is accused of scheming to implicate its critics through sham trials launched by prosecutors and ruled by judges linked to Gülenists. The indictment also says the victims of wiretapping had no past record of conviction, and their activities did not require a surveillance operation. Prosecutors say they were wiretapped under false names as an attempt by the Gülenists to cover their tracks.

Yılmazer was also implicated in the investigation over negligence of public officials in the murder of Turkish-Armenian journalist Hrant Dink in 2007. Yılmazer and other high-ranking police chiefs were accused of covering up intelligence reports of a murder plot to kill Dink.

The trial comes one day after six suspects, including former police chiefs, were arrested for another mass wiretapping by Gülen affiliates. Their arrests were part of an investigation in the "Selam-Tevhid plot." Gülenist infiltrators within law enforcement and the judiciary face charges of creating a fake terrorist organization they named Selam-Tevhid - a group they linked to Iran - to justify the wiretapping of hundreds of people including Daily Sabah employees. The wiretapping had targeted everyone from journalists to National Intelligence Organization (MİT) Chief Hakan Fidan who currently heads the country's leading intelligence service.

The Gülen Movement, which boasts a large international following through its wide network of schools, companies and nonprofit organizations around the world, evolved from a simple religious community to a politicized cult. The group is now the target of multiple investigations into its activities in Turkey.

The indictment against Yılmazer and others also gave insight into the rise of the Gülen Movement. It said the movement grew in the 1990s and gained a foothold in 160 countries. It cites the group as a worldwide organization with immense financial and intelligence power. "Fethullah Gülen views himself as a spiritual leader to the world's Muslims," according to the indictment, where he is defined as the leader of the FETÖ / PDY. Gülen's case was referred to prosecutors in the capital, Ankara, where he is a defendant in various cases regarding the Gülenists' illegal activities.

Gülen resides in Pennsylvania and has no intention of returning to Turkey for his trials, as his lawyers have indicated. Authorities are working on an extradition process with the United States, as the first trial for Gülen started last year. If extradited, the 74-year-old will likely spend the rest of his life in prison, as the coup attempt charges he faces carry multiple life sentences.
RELATED TOPICS