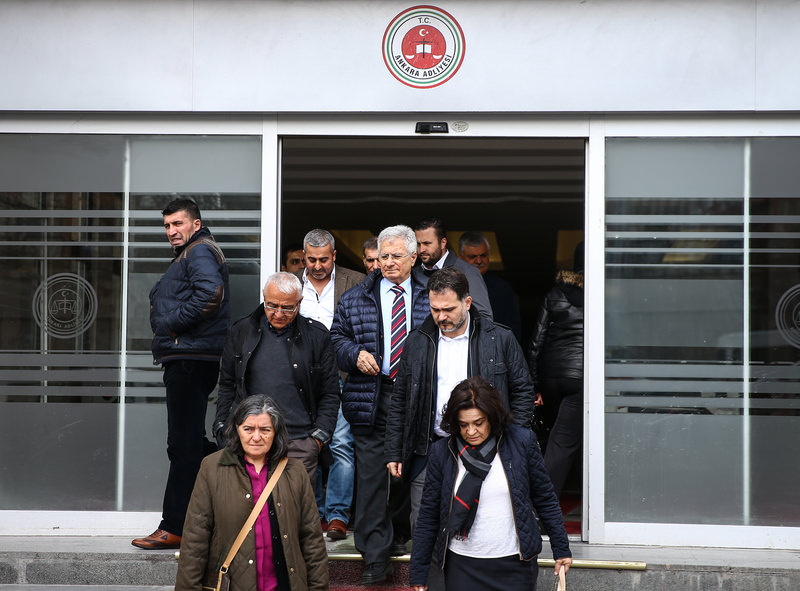 A trial over massive fraud surrounding a nationwide civil servant exam got underway yesterday, as 230 suspects allegedly linked to the Gülenist Terror Organization (FETÖ) face charges of supplying questions and answers to people affiliated with the Gülen Movement.

Gülenists are accused with the infiltration of state agencies, and the state has started a purge of sympathizers of the Gülen Movement, which allegedly twice attempted to oust the government three years ago.

The case stems from the revelation that a large number of people who scored high on the 2010 Public Personnel Selection Exam (KPSS) were either partners or relatives of Gülenists, or were employed by companies and schools linked to the Gülen Movement. The head of a non-governmental organization associated with the Gülen Movement, who remains at large, is accused of delivering answers to the exam to participants, with the assistance of Gülenist infiltrators within the state-run body organizing the exam.

An Ankara court heard the testimonies of the accused in the trial, whose first hearing is expected to continue until Friday, due to the large number of defendants. Dursun Şahin, a defendant who scored exceptionally high in the exam, denied all charges and said it was simply his hard work that had brought him success in the exam. Questioned by judges as to whether the private school where he worked was linked to the Gülen Movement, Şahin said he took the teaching job because of the relatively high salary.

Prosecutors believe the KPSS was a springboard for Gülenists to infiltrate state institutions and climb the ranks of the bureaucracy.

The court will also hear from 272 people who filed criminal complaints against FETÖ over exam fraud. The plaintiffs are mostly those who failed to pass the exam. Prosecutors have asked for prison terms collectively totaling 3,800 years for the defendants who were arrested after a five-year inquiry. The exact number of people who scored high thanks to being supplied with the questions and answers is not available, although authorities say the fraud was carried out nationwide.

Ünal Yarımağan and Ali Demir, former directors of the Measurement, Selection and Placement Center (ÖSYM), the state-run body tasked with organizing the KPSS exam, also face charges of abuse of duty and destroying evidence in the case.

Prosecutors say in the indictment that FETÖ's attempts to install its members in public agencies posed a serious threat to the state, and also damaged the public's confidence in equality and qualification for public jobs.

Latif Selvi, deputy president of Eğitim-Bir-Sen, a labor union for educators, said the leaking of questions to defendants was "a scandal." Speaking to Anadolu Agency (AA), Selvi said the theft of questions meant "theft of a society's future and the waste of people's personal labor for the sake of some other people's personal interests. We hope the thieves will get the punishment they deserve. If you have people abusing their duty appointed at public agencies, you harm the public confidence. We ask for the heaviest sentences for those responsible for fraud and termination of civil servant contracts of people indicted in the case. We will closely follow the case and we ask some sort of compensation for victims of this fraud."

Habibe Öçal, president of Women's Committee at Memur-Sen, Turkey's largest civil servants' union, told AA that the fraud was "a serious theft of rights." Öçal said there were reportedly large gaps between the exam score of participants and their school grades. "For instance, there are reports that participants who graduated from university with scores as low as 55 answered almost all the exam questions correctly. Authorities should investigate this."

The KPSS is not the only exam for which Gülenists are accused of cheating for easy access to state posts. The cheating scheme was also detected in international exams, such as the International English Language Testing System (IELTS), the Test of English as a Foreign Language (TOEFL) and two renowned tests for English language proficiency. Sources say an undisclosed number of academics who are allegedly linked to the movement were investigated, after it was discovered that the organizers of the IELTS in Turkey were bribed by the Gülenists.

The IELTS is used for the promotion of academics at universities. An inquiry in 2013 found that more than 1,500 people scored suspiciously high on exams at five private universities with ties to the movement, who were eventually employed by public universities. Like in the KPSS scheme, accomplished participants were often found to have either partners or relatives who scored too low in previous, easier exams organized by the ÖSYM. An inquiry into cheating on TOEFL exams focused on allegations that Gülenists with higher language skills sat for the exams on behalf of those who had failed previous TOEFL exams.

The Gülen Movement, headed by the U.S.-based retired fugitive imam Fethullah Gülen, is at the heart of a string of terror probes. Gülen and his followers, wanted on charges of running a terrorist organization, are accused of attempts to overthrow the government. Several investigations revealed the movement planned to carry out its plots through its members in the judiciary and police, as well as a massive network of followers from every profession in Turkey and around the world. Dozens of police officers, prosecutors, judges and bureaucrats are already on trial for a string of allegations ranging from widespread illegal wiretapping and plotting to imprisoning critics of the movement with forged evidence.