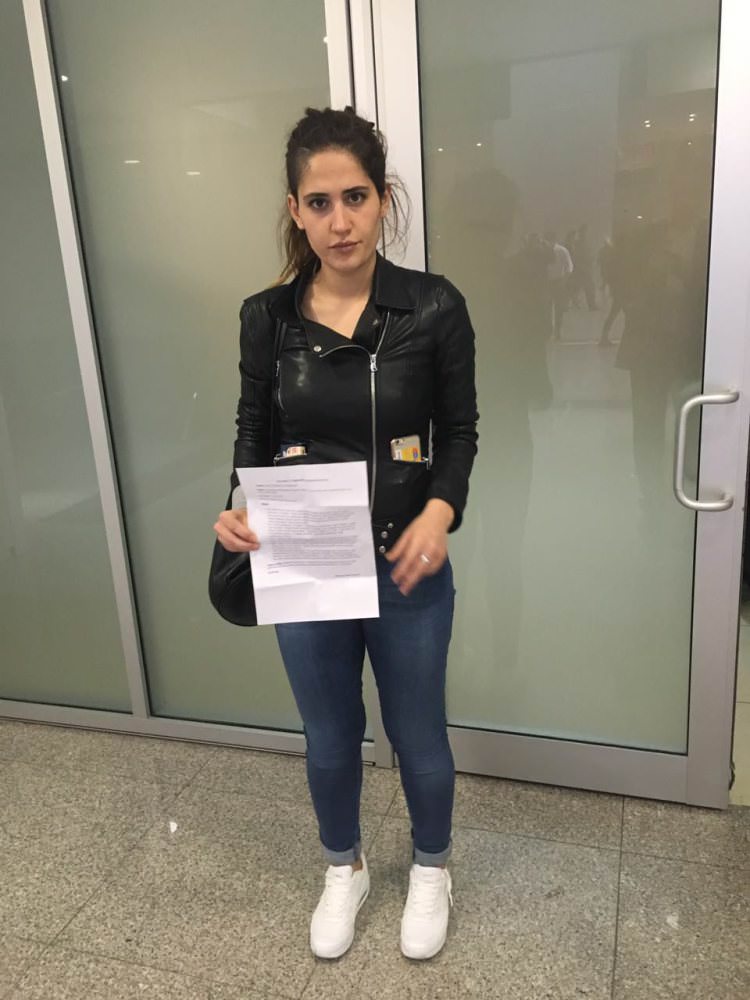 by Daily Sabah Apr 04, 2016 12:00 am
The assault and verbal harassment targeting Dilek Yaman, a reporter for Daily Sabah's sister newspaper Sabah, has drawn widespread condemnation. What has sparked additional fury, however, was that the suspected assailant was a journalist for another newspaper.

Murat Sabuncu, who works for Cumhuriyet daily, faces a criminal investigation for punching Yaman, who was at an Istanbul courthouse on Friday to cover the trial of Sabuncu's colleague Can Dündar, editor-in-chief of Cumhuriyet.

As Dündar and Erdem Gül were preparing for the second hearing of the trial at Çağlayan courthouse, a group of journalists surrounded the duo working for Cumhuriyet, firing up questions on the case that defendants claim to be a matter of press freedom. Yaman was accompanying a fellow Sabah reporter who asked a few questions that apparently bothered Dündar. Cumhuriyet staff accompanying Dündar were also visibly angered, and the anger soon turned into a commotion outside the courtroom with Cumhuriyet journalists harassing Yaman and others. When Yaman retorted, Sabuncu, as seen in a video of the moments, landed a punch on the young woman before others around her broke up the argument. Yaman immediately filed a complaint against Sabuncu and others accompanying him while a forensics team confirmed the physical assault on the Sabah reporter. Prosecutors launched an investigation into the incident and Sabuncu was identified as a suspect while others seen in the video will be being investigated for assault and harassment.

Speaking about the incident to A Haber TV, Erdal Şafak, editor-in-chief of Sabah newspaper, said: "Ironically, those who advocate for press freedom and safety of journalists assaulted a journalist - a female journalist at that. It is an unacceptable act against someone, a defenseless person, who was only armed with her pen and voice recorder, and who was there only to do her job."

Dündar has long tried to portray the charges against him as a blow to press freedom. Dündar and Gül, Cumhuriyet's representative in the capital, Ankara, were released pending trial in the case stemming from publishing confidential information regarding the National Intelligence Directorate (MİT). The two men are accused of aiding the Gülenist Terror Organization (FETÖ), which is accused of being behind the raid on MİT trucks conducted by alleged Gülenist accomplices within the judiciary and military.

Şafak criticized the "silence" of fellow journalists on the assault of Yaman. "They raise hell if a stone hits the windows of a newspaper's offices, but in this case, on the punching of a journalist, they are quiet and even tried to cover it up. It is a saddening episode for our profession," Şafak said.

Sabah's chief news editor, Hayrettin Bektaş, said Yaman was in the courthouse "just doing her job, asking questions." "Unfortunately, she was the victim of an assault that amounted to a lynching attempt. It is also significant that those assaulting her were journalists. It is a scandal and a matter that should be considered both as an attack against press freedom and violence toward women," he told A Haber TV. Like Şafak, Bektaş criticized his fellow journalists' stance on the incident. "We contacted media nongovernmental organizations and women's rights NGOs to check if they would have a message of criticism. Unfortunately, there wasn't much. On the contrary, we came across statements defending the assailants. It is horrible," he said, referring to remarks by other journalists denying Sabuncu assaulted Yaman despite the presence of video evidence.
RELATED TOPICS