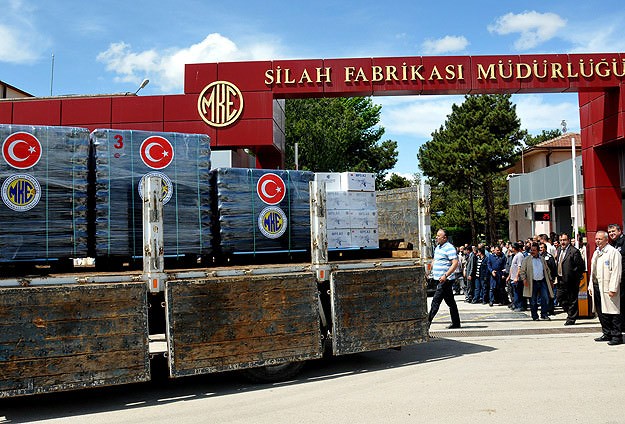 The manager of Turkey's major state-run arms producer Mechanical and Chemical Industry Corporation (MKE)'s Kırıkkale factory, Mustafa Tanrıverdi, was detained on Thursday by security forces on charges of 'espionage'. Tanrıverdi was arrested later on the same day for "exploiting state secrets" and "disloyalty to the state."

Police conducted a raid after a tip about Tanrıverdi came from the officials of a United States-based Turkish defense company that he contacted. Informants told police the man was trying to sell them designs and production plans for the MP-5 rifle and MPT-76 infantry rifle, also referred to as the National Infantry Rifle, the country's first locally made rifle that recently began being produced. Upon the warning, a technical surveillance was imposed on Tanrıverdi.

Undercover police accompanied an official from the U.S.-based firm who met Tanrıverdi at a restaurant in Ankara's Söğütözü district on Thursday in an elaborate operation where the entire restaurant was manned by undercover officers, media outlets reported.

The suspect arrived with two USB memory sticks, one with MP-5 data and the other with MPT-76 infantry rifle data, sold them to the company official for TL 200,000 ($70,236) and $300,000, respectively. Officers captured Tanrıverdi as he left the restaurant with the money. He was arrested by a court on charges of exploiting state secrets, treason and bribery, all of which carry life sentences. Media outlets reported Tanrıverdi pleaded guilty and expressed regret during his initial interrogation.

The MPT-76, which contains a mechanism modeled after the M16 rifle, is the first infantry rifle designed and manufactured entirely in Turkey. A test batch was produced in 2014, and it is scheduled to start mass production this year. Moreover, the MKE is expected to supply the Turkish Armed Forces with at least 500 rifles this year. The rifle's production started after it passed international standards test for durability and reliability. The rifle features a 7.62 mm caliber barrel, features a 20-bullet magazine, has a range of 600 meters and is usable in temperatures between minus 40 degrees Celsius and 65 degrees Celsius as well as underwater and in muddy conditions.

The research and development phase of the National Infantry Rifle alone cost the Defense Ministry $22 million.