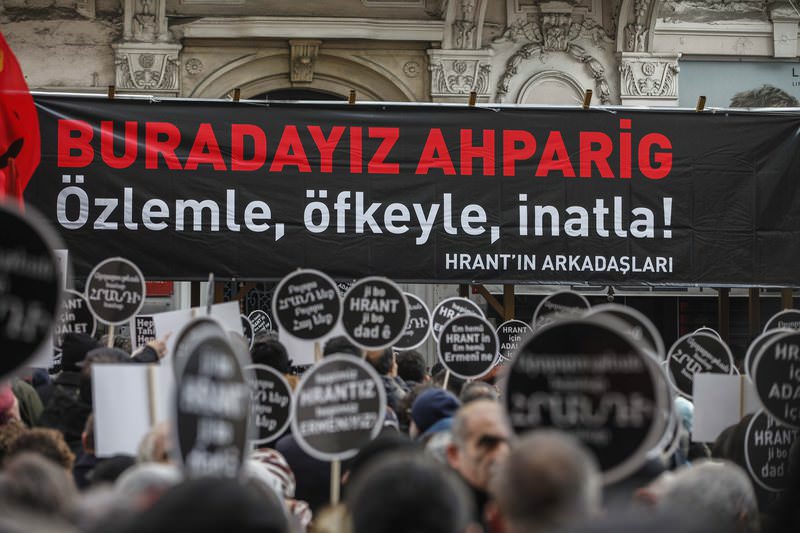 Two former police officers were released Tuesday in a prominent trial accusing former police chiefs of negligence and orchestrating a cover-up regarding the 2007 murder of prominent Turkish-Armenian journalist Hrant Dink.

The Former police officers, linked to the Gülen Movement, Özkan Mumcu and Muhittin Zenit, who were accused of "causing death due to negligence" and "professional misconduct" were released under judicial control.

Ramazan Akyürek and Ali Fuat Yılmazer, two police chiefs who served in the upper echelons of police intelligence, were among 34 suspects who appeared before an Istanbul court after a court decided earlier to combine the case of negligence and the actual murder case. Yılmazer and Akyürek are accused of links to the Gülen Movement, who were allegedly involved in attempts to overthrow the government.

The suspects are accused of failing to stop the plot to murder Dink, who was editor-in-chief of the Agos newspaper when he was shot outside his offices in Istanbul by a 17-year-old attacker. The murder was originally thought to be an angry reaction by ultranationalists to Dink's discourse of reconciliation between Turks and Armenians, whose relations were strained over the so-called Armenian "genocide" or the mass deaths of Armenians in 1915 as Turkey officially refers to it. The case has dragged on for years while the person convicted of the murder, Ogün Samast, and two others accused of masterminding the plot to kill Dink were imprisoned. A renewed inquiry into the case has found police chiefs and public officials were aware of the plot but turned a blind eye to it. One of the alleged masterminds of the plot has turned out to be a police informant.

Ali Fuat Yılmazer and Ramazan Akyürek have already been detained last year as well as this year. Yılmazer is under arrest as part of a separate investigation into wrongdoings committed by the Gülen Movement.

The family of Hrant Dink did not attend the hearings, while a group of activists calling themselves "Friends of Hrant" made a statement outside the Istanbul courthouse where the trial was underway, calling for "justice" for Dink. The group said it has been more than nine years since the murder and the judiciary finally came to the conclusion to try the "real murderers," pointing to the role of public officials.

The Gülen Movement is accused of trying to shift blame for the murder onto others, including Ergenekon, an alleged gang of generals, journalists and several prominent figures who were imprisoned after a trial conducted by Gülenist prosecutors. All the defendants in the Ergenekon case were released years later after investigations revealed that they were imprisoned by prosecutors and judges close to the movement based on forged and tampered evidence. The movement is known for its widespread infiltration within the police and judiciary, which reportedly enabled Gülenists to stage sham trials to imprison their critics.