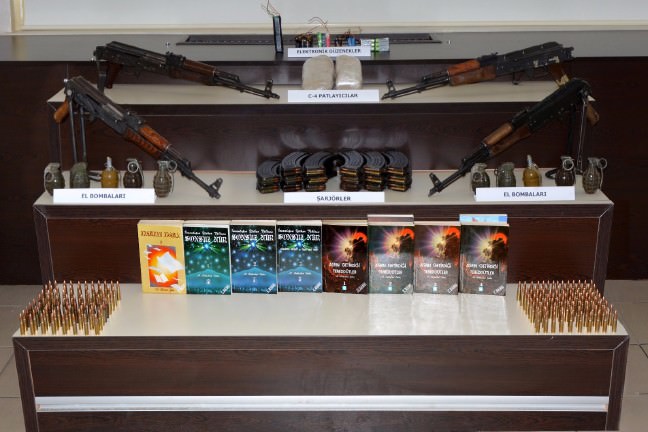 by Daily Sabah May 01, 2016 12:00 am
A PKK militant has been arrested for allegedly plotting a bomb attack in Mersin and Adana provinces in southern Turkey after he was captured in a Gülenist cell located in western Denizli province.

The address at which the PKK militant D.K was staying is allegedly a house used by the "parallel structure", the Gülenist Terror Organization (FETÖ), as security forces confiscated books and records by Fethullah Gülen in the house. Two others residing in the house were also detained but released after giving statements at the police station.

According to the statement released by the Denizli Police Department, the operation into the Gülenist cell also led to unearthing a cache of ammunition buried by the PKK group in the province. The terror attack plots were foiled after security forces captured a militant while he was trying to detect weapons buried in a property in Adana.

Residences funded by Gülen Movement-linked institutions are generally occupied by students attending public schools or schools run by Gülen, and usually receive scholarships and accommodation from the shadowy movement during their education. They are typically asked for a lifetime of allegiance and services to the movement in return. Regular Islamic prayers and a pious lifestyle are a must at the residences, but they are also indoctrinated with Gülen's teachings and books along with the key texts of the Nur religious order.

These houses form the nucleus of the movement, which is accused of infiltrating state institutions through cheating on nation-wide exams and nepotism, along with charges of terrorism and organized crime involving the judiciary and police operations carried out with fabricated evidence and illegal wiretapping.
Last Update: May 02, 2016 11:53 am
RELATED TOPICS