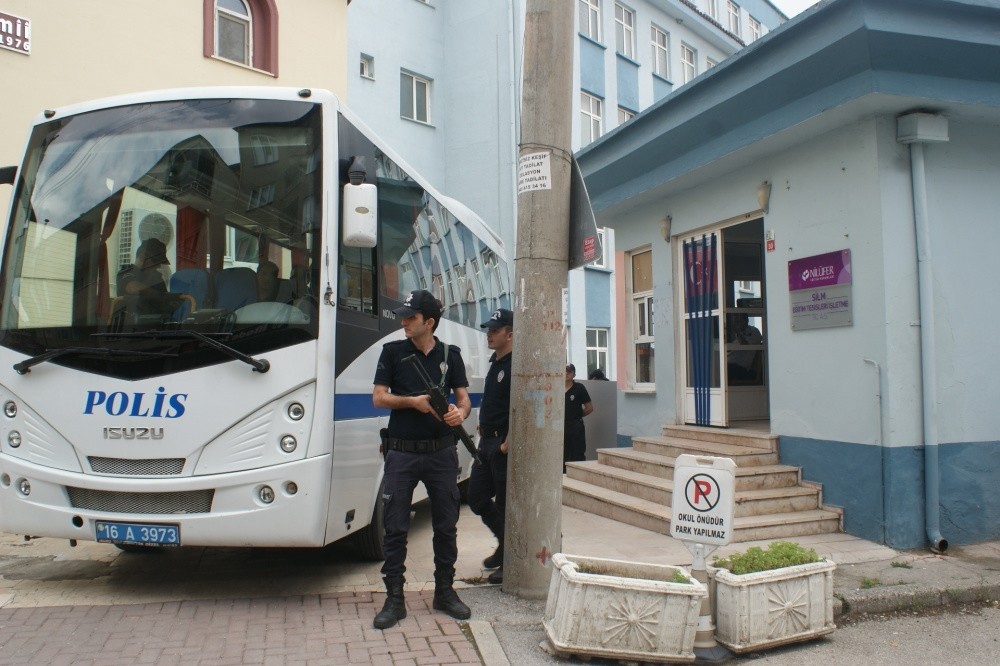 Police officers stand guard outside a Gu00fclen-linked school in the city of Bursa. The schools have been scrutinized since 2013 for their links to the Gu00fclenist Terror Organization.
by Daily Sabah Jul 20, 2016 12:00 am

Ankara is speeding up a crackdown on Gülenists after the shady group launched a failed coup on Friday. Schools, the main source of revenue and recruitment for the Gülen Movement, face further probes and likely shutdowns, according to media reports

The Gülen Movement or rather, its offshoot Gülenist Terror Organization (FETÖ), faces heightened scrutiny after it was accused of masterminding last week's failed coup attempt. As the country steps up the purge of Gülenists - underway since 2013 - schools run by the group are being probed by authorities and may have trustees appointed, according to reports.

The National Education Ministry is working to secure trustee rulings from the courts for some 1,000 schools linked to the Gülen Movement, from primary to high schools, according to a report in the Habertürk daily.

Since 2013, the year Gülenists declared war on Turkey with two coup attempts in a week under the guise of a graft probe targeting government officials, some 400 schools had trustees appointed in the wake of judicial investigations. Anti-terror units in the National Police and a state-run financial crimes board found in their inquiries that schools make up a substantial part of the FETÖ's finances. The movement also has companies in other sectors. Authorities also appointed trustees, a practice to cut off funds to terrorist organizations, to seven private universities. Habertürk reported that eight more universities associated with the controversial group will likely be appointed trustees in the coming months. Media outlets report some 1,000 schools have direct or indirect links to the FETÖ.

University presidents and Yekta Saraç, the chairman of Board of Higher Education (YÖK), the state-run body that oversees universities, convened on Monday for a joint denouncement of the foiled coup attempt by the FETÖ last week and vowed to remove Gülenist infiltrators from universities. The Sabah newspaper reported that YÖK Chairman Saraç instructed university presidents to dismiss all personnel with Gülenist links.

University presidents said in a joint statement that the July 15 coup attempt was "a bloody assault on Turkey's democratic system" and said the "parallel structure" within the state - a reference to Gülenist infiltrators - had "extensions" in academia. "Those are the biggest enemies of free and scientific thought and they cannot be allowed to thwart the country's scientific and technological improvement." The joint statement said universities were supportive of a "democratic, parliamentary system" and would put their words "into action."

Experts say the now-closed prep schools, set up to prepare high school students for university admission exams, were the first step to recruit sympathizers to the movement who rose in the ranks of law enforcement and the bureaucracy thanks to the inherent nepotism of fellow Gülenists already in key posts. The group turned to establishing universities in the last decade amid the private university boom in the country and several universities linked to Gülenists face investigation for seizing valuable land for cheap thanks to their connections to Gülenist bureaucrats.

The movement also runs a global network of schools in African countries, Central Asia and the United States.

The Gülen Movement started out as a religious group before evolving into a powerful, politically charged entity and later, experts say, into a terrorist organization that depends on education to both advance its ideology as well as swell its funds. Gülenist academics were reported among the academic cadres of several state-run universities.

The FETÖ, designated a national threat and terrorist organization, is accused of a long sheet of crimes, the latest being the July 15 coup attempt. Gülenists already face jail for illegal wiretapping of thousands of people, sham trials to imprison Gülen Movement's critics, money laundering, blackmail, extortion and forgery through infiltrators within the police, judiciary, bureaucracy and military.
Last Update: Jul 20, 2016 6:06 pm
RELATED TOPICS