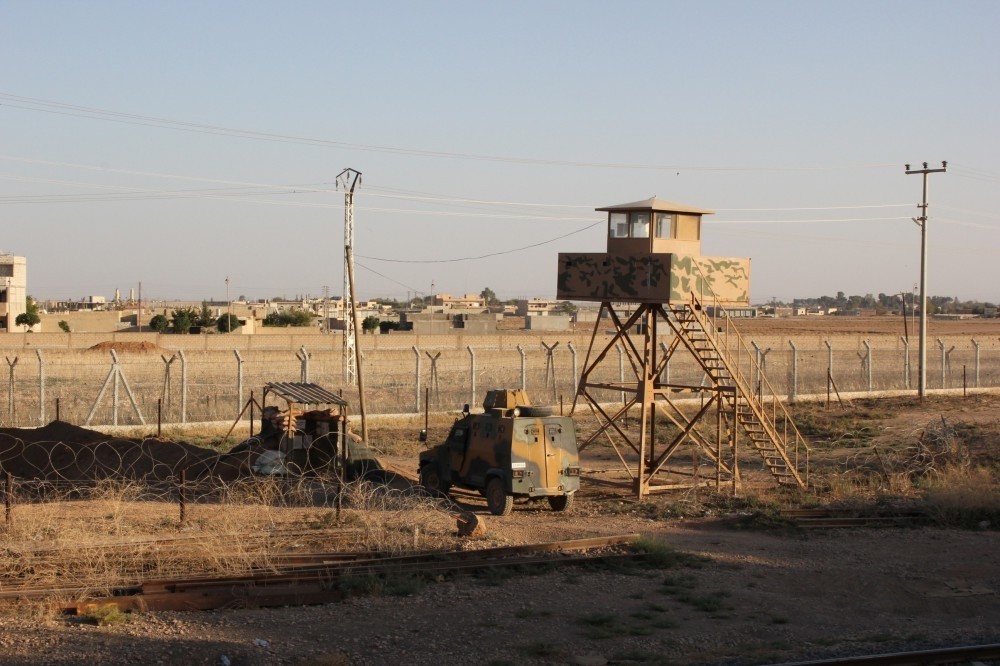 A border outpost in the province of u015eanlu0131urfa manned by soldiers. Gu00fclenists are accused of stalling the efforts to improve the security on country's Syrian and Iraqi borders.
by Daily Sabah Aug 19, 2016 12:00 am

In the latest revelation regarding the cult accused of the July 15 coup attempt, Industry and Technology Minister Özlü said that a high-tech project for border security could have been sabotaged by FETÖ infiltrators in bureaucracy who stalled the project

The Gülenist Terror Group (FETÖ) may have played a role in stalling national security projects during a time when war was on Turkey's doorstep. Industry and Technology Minister Faruk Özlü told reporters that a high-tech border security project developed by Turkish scientists might have been deliberately delayed by FETÖ infiltrators, though he avoided openly naming the cult as the one to blame for problems in the project.

Özlü was responding to reporters' questions yesterday at Parliament about the scale of infiltration by members of FETÖ, which is accused of masterminding the July 15 coup attempt.

Ergin was appointed to TÜBİTAK, the leading scientific institution involved in developing defense and other projects, after a purge of FETÖ supporters in 2013. TÜBİTAK was among the main targets of Gülenist infiltration.

According to statements quoted by the Sabah daily, Özlü said an investigation was underway into TÜBİTAK personnel and projects they worked on. "TÜBİTAK has been one of the institutions FETÖ sought to access most. It has about 4,500 personnel and we see some 1,700 people were employed between 2011 and 2013, more than the number required to perform TÜBİTAK's tasks. Some 600 people were dismissed during the tenure of my predecessor and the rest is being investigated. We will not tolerate any FETÖ influence," he said.

The minister said TÜBİTAK was working on an important border security project. "In cooperation with defense industry companies ASELSAN and HAVELSAN, TÜBİTAK was developing a project for the centralization of border security. It would provide more security than simple barriers and walls and would integrate a warning system improved with electronic devices, night vision equipment etc. We detected attempts to stall it, to slow down the development process. We need hard evidence at that point but it is safe to say there has been an attempt to undermine the project," he said. Özlü said they were also investigating whether FETÖ infiltrators in TÜBİTAK diverted the institution's resources "to bad companies."

Ahmet Arif Ergin has claimed that TÜBİTAK was developing an early warning system for military outposts in remote areas under threat of PKK attacks when Gülenists in the institution scrapped the project, leaving the outposts vulnerable to attacks that have killed hundreds.

Gülenists who infiltrated TÜBİTAK as bureaucrats, technicians and experts benefited from the organization's vast resources, enabling them to forge expert witness reports in sham trials to imprison critics of FETÖ leader Fethullah Gülen, as well as wiretapping encrypted telephones used by the country's leaders.

Ergin, who investigated the extent of Gülenist influence in the institution after he replaced a predecessor linked to FETÖ, claimed the 2011 cancellation of an outpost project is a clear indication of cooperation between FETÖ and the PKK. Ergin has claimed that FETÖ holds "responsibility" for the deaths of the hundreds of soldiers who were killed in PKK raids on the outposts since 2011.

Following the July 15 coup attempt, 167 staff members from TÜBİTAK were dismissed. They were part of a purge by authorities to weed out Gülenists and their sympathizers from state institutions.
Last Update: Aug 19, 2016 12:35 pm
RELATED TOPICS