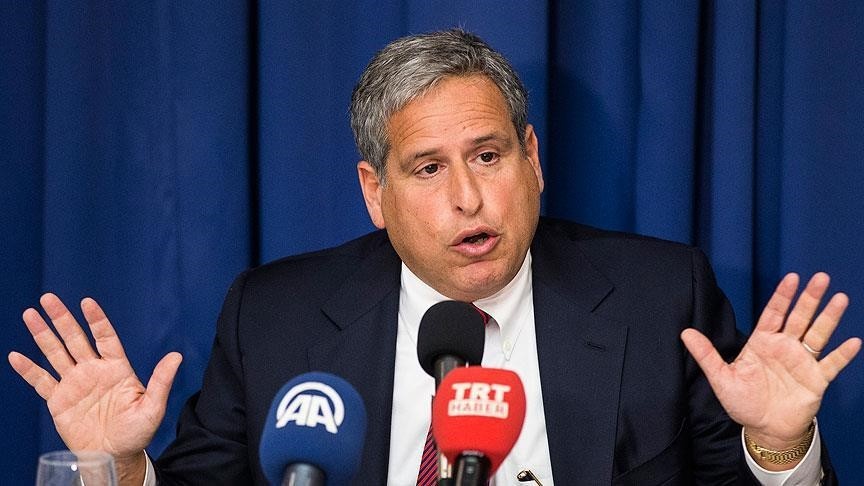 The lawyer contracted by Turkey to investigate Fetullah Gülen and his Gülenist terror-cult (FETÖ) activities believes it will take time before his extradition case is resolved but ultimately, Washington will have to hand over the terror leader.

"It is my belief that in the end the U.S. will be under a duty to extradite Gülen," according to Robert Amsterdam, founding partner of Amsterdam & Partners LLP law firm.

"It is very important for Turks to realize that this Gülen case is so unique. It is so difficult for Westerners to comprehend it that they should be patient and understand that it takes a tremendous amount of time for people to really see the Gülen organization for the criminal organization that it is and in fact for the terror that it inflicted," he told Anadolu Agency in an exclusive interview regarding Gülen and his terror-cult FETÖ, accused of orchestrating a recent deadly defeated coup.

The July 15 attempted coup that left 240 people killed and nearly 2,200 injured was "a pure act of terror" according to Amsterdam who hinted that because Turkey and the U.S. are signatories to major international conventions on terror, it could open the way for Gülen's extradition to stand trial in Turkey.

Ankara has repeatedly asked for the terror leader's extradition from the U.S. despite a standing treaty between the two NATO allies. After U.S. Secretary of State John Kerry said Washington wants to see "evidence, not allegations", Ankara responded by sending two batches of official documents to satisfy Washington's request.

"So, in the end, I am confident this could be worked out, but as I said, it is a government-to-government process.

"The United States has said that they want a constructive relationship on the Gülen matter, and I think we should allow this diplomatic interchange to take its course."

Amsterdam's probe into Gülen has uncovered a network of organizations linked to the terror chief and the U.S. government in which money is exchanged for political influence.

"This is an incredibly sophisticated difficult story for people to comprehend, that an imam without knowledge of the U.S. could penetrate state, local and federal politics in this way.

"It frankly does not seem believable. I have to think Mr. Gülen had his own abi, his own big brother guiding him, because otherwise it makes no sense," he said using the word to address members of FETÖ.

"Mr. Gülen has been brilliant in seizing on the charter school mechanism, which in the U.S. is unregulated. So, he is gone in this system where there are other schools engaging in some of what he engages in, probably not to the same extent. Those other schools helped lobby for Gülen so he is not alone."

Amsterdam is convinced Gülen receives assistance and pointed to a case in the midwestern state of Indiana where his probe found more than 400 members of the government there who went on Gülen-organized trips to Turkey. "That is incredible. How he managed this is shocking," he said.

In a recent article he penned for Forbes magazine, Amsterdam detailed financial improprieties within the Gülen charter school networks in California, Oklahoma and elsewhere.

The lawyer told Anadolu Agency that approximately 6,000 students are being educated in Gülen schools across the country to the tune of $500 million and part of those funds are used to benefit the Gülen movement.

He said one of the most blatant acts of fraud is committed by way of the H-1B visa. "His organization has systematically violated U.S. immigration law for over a decade, criminally," Amsterdam said. The special visa is used to place foreign nationals in employment positions that cannot be staffed by U.S. citizens.

FETÖ allegedly paid teachers at its schools $55,000 dollars annually but those workers had to repay between 15 and 20 percent of their salaries to Gülen, Amsterdam said. "This is just before you scratch the surface."

He also described another type of fraudulent activity in which front companies are set up and layered bonds are used. In one case in Texas, a front company stands to make $18 million from the scheme at the expense of taxpayers.

Beyond the schools and institutions such as The Rumi Foundation, Gülen appears to have designs on the U.S. armed forces, too.

Amsterdam said the group is trying to get onto military bases but when pressed for more information, he declined to go further, saying he would talk only about what he knows and does not want to create speculation.

Any probe into the FETÖ terror-cult is complicated by its sheer size and apparently politically well-connected members.

Amsterdam, who usually is on the side of government opponents, said he took the case because he believed Turkish President Recep Tayyip Erdogan and his government are at a disadvantage while dealing with Gülen in the U.S.

"I believe Turkey has not been treated fairly for decades and it has not been shown the respect it deserves. I thought I could have a role in helping to right that by exposing the danger of Gülen which I consider to be a false flag," he said.

Amsterdam thinks it was a "tremendous mistake" for Washington to delay its eventual condemnation of the coup but he doesn't lend any credence to what many Turks believe was U.S. involvement in the abortive overthrow.

"Mr. [Barack] Obama would never be involved in supporting a coup," he said. "Turkish people need to understand, however, that this behavior is not indicative of an American view, it is indicative of a government that is - the Obama administration - is overwhelmed by complex problems," he added and went on to criticize U.S. Mideast policies that have been "deeply problematic" for some time.

"So the U.S. itself owes Turkey a debt in terms of the work that has been done to try to expose this threat to the American people," he said.

In the coming weeks, Amsterdam's team plans to reveal results of an investigation on Gülen in Ohio and Chicago, and at the end of September, a book will be published that details Gülen's international activities.

"It is very important to educate people about the Gülen fraud in a way -- about how this organization really betrays the very principles it pretends to adopt and how it has penetrated the American political system with a massive donor campaign to attempt to gain impunity for their conduct in the U.S.," he said.