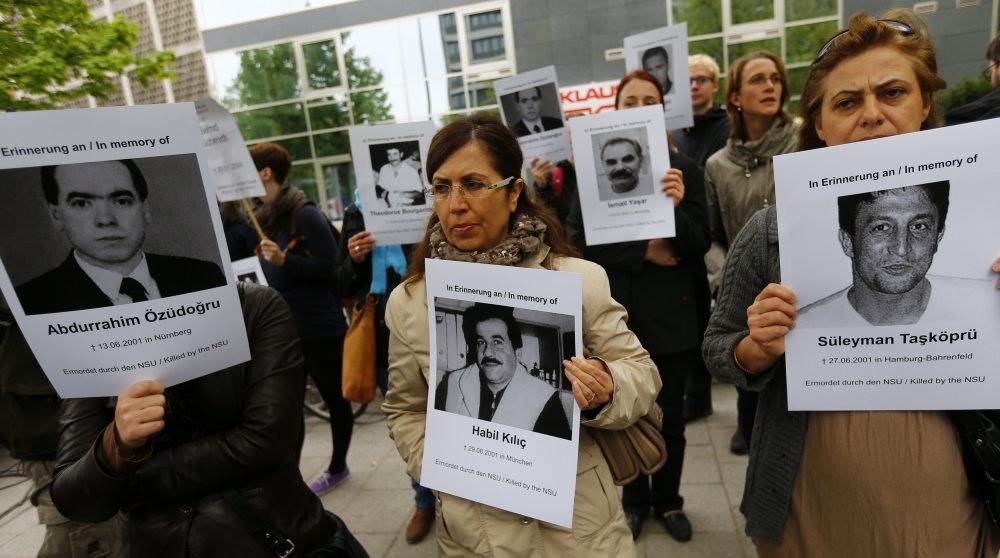 Demonstrators carry photos of NSU victims during a trial on the neo-Nazi gang in Germany. The gang is implicated in the murders of eight Turks, a Greek and a German policewoman.
by Daily Sabah Oct 06, 2016 12:00 am

Germany's intelligence services are once again subject to allegations of a cover-up with regards to the neo-Nazi National Socialist Underground (NSU) gang that is implicated in the racist murders of Turks in the country.

Lawyers for the family of Mehmet Kubaşık, killed by the NSU in 2006, filed a criminal complaint against Lothar Lingen, a senior official in the Federal Office for the Protection of the Constitution (BFV), Germany's domestic intelligence agency. Lingen, who was in charge of the BFV's division monitoring the far-right scene, is accused of destroying documents that could have shed light on the NSU's murders. Speaking to Anadolu Agency after filing the complaint against Lingen, Carsten Ilius, lawyer for the family of Kubaşık, said new revelations on the case added to suspicions that the BFV destroyed paperwork that might be related to the NSU in 2011. Ilius said documents concerned seven informants in the far-right scene, and they were destroyed in November 2011, right after authorities found out that the gang was responsible for the murders. He said Lingen's statements during the legal process concerning the NSU showed intelligence officials were concerned about facing an inquiry if it was revealed that the BFV did not act though it knew about the neo-Nazi gang thanks to its informants in the far-right scene. Ilius said Lingen's 2014 testimony to prosecutors only came to light after an inquiry by a parliamentary committee investigating the potential cover-up and negligence in the case.

The lawyer said prosecutors launched an investigation into claims of destruction of documents that might have related to the NSU, but they later dropped the case. He said new findings should grant a new investigation. "Lingen's remarks in 2014, and his actions point out that the destroyed files might contain important information about the gang. By destroying them, Lingen obstructed the criminal inquiry," he said, adding that the incident added to German authorities' reluctance to shed light on the NSU murders.

Kubaşık's wife Elif Kubaşık said they were wondering whether the intelligence service had known about the murders beforehand. "(Authorities) pledged to resolve the murders, but it seems they did not do that, and to the contrary, kept them in the dark," she said.

In his testimony to the prosecutors, which was revealed last month, Lingen acknowledged he ordered the destruction of the documents about the informants but claimed the intelligence service had no prior knowledge of the NSU and its crimes. He said their motive in destroying the files was that pressure would be turned on the intelligence agency after the NSU case was revealed as they had many informants on the far-right scene and the BFV would be saddled with "an unnecessary burden." The intelligence official left the intelligence service after the destruction of the documents though he still holds a post in another unidentified state agency.

Murders of eight Turkish nationals and a Greek man between 2000 and 2007 were long thought to be the result of a domestic dispute or mafia killings among ethnic communities by authorities, while German media further fueled sentiment blaming Turks themselves for murders by dubbing them as the "döner killings." As a result of a series of seemingly coincidental incidents, the NSU and its crimes were unearthed. These include the apparent suicide of Uwe Boehnhardt and Uwe Mundlos after police closed in on those two NSU members following a botched bank robbery. This was followed by Beate Zschaepe, the third member of the gang, turning herself in to authorities after she set fire to a house she shared with other gang members. Zschaepe remains the sole defendant in the NSU trial that has been underway since 2013 and denies connection to the killings although she admitted she were aware that the NSU was responsible for the killings of Turks and a Greek national, as well as the murder of a German policewoman, a bomb attack in a predominantly Turkish neighborhood in Germany and bank robberies.

Authorities' failure to detect the activities of the NSU for years prompted concerns of a potential cover-up and even protection of far-right groups, especially after it was revealed that NSU members had close ties to some informants working for intelligence services. Several intelligence officials have resigned since the trial started, but no legal proceedings are underway on possible negligence and cover-up related to the case.
RELATED TOPICS