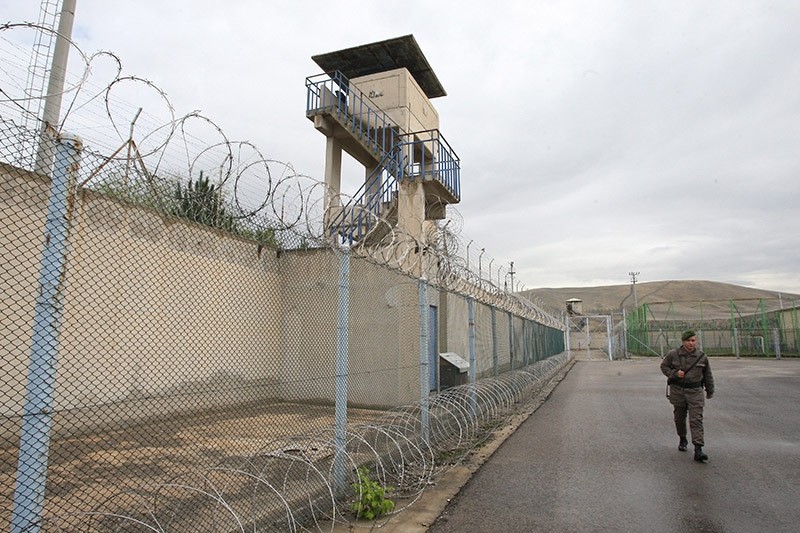 Authorities foiled a massive-escape plan made by detainees, arrested for the July 15 coup attempt blamed on FETÖ, when blueprints of the prison were found in their possession in capital Ankara

Guards of a prison in central Turkey, where 5,544 Gülenist terror group (FETÖ) members are jailed after the bloody July 15 coup attempt, foiled the escape plans of FETÖ inmates at the last moment during searches conducted in their cells.

Turkish broadcaster NTV reported on Thursday that the security staff at Sincan Prison in capital Ankara discovered detailed sketches, encrypted notes, precise plans of the cells and dormitories, in addition to positions of the air defense system units deployed to ensure the security of the prison.

Prison administration handed the blueprints and notes containing cryptic expressions such as, "Emperor," "Toros the head of the dragon," and "Man in the Mercedes," to prosecutors investigating the plan.

The command of the gendarmerie unit policing the Sincan Prison informed the Chief Prosecutor's Office of Ankara of the escape plans and asked for further preventive measures to be taken. The gendarmerie report also noted that the prison is currently overcrowded; accommodating more than 8,000 inmates whereas originally designed to accommodate 6,000 inmates at most.

The report also stressed that FETÖ inmates do not miss any opportunity to communicate, developed a secret communication method through hand signals and gestures with each other, adding that their overall group behavior indicates a preparation for a possible uprising, hostage-taking, arson or escape attempt.

Highlighting that most of the FETÖ inmates were serving in Turkish security institutions prior to the July 15 coup attempt, the report said that the inmates had acquired military skills in the past.

The chief prosecutor's office also launched an investigation for the prison guards over suspicions on cooperation with FETÖ prisoners. The number of security members guarding the prison has also been increased.

"FETÖ detainees often speak about mass-November releases to boost their morale and possible compensation for what they've called "unfair detention." They have exerted efforts to keep their solidarity so that no detainees would invoke "remorse law," which grants lenient sentences in return for prized confessions about FETÖ's inner workings," the report highlights.

Through social media, FETÖ members often share messages of expecting "good news" in November. Last month, authorities intercepted a phone call between a former high-ranking police officer and his wife in an eastern-city prison in Malatya, where he was held on charges of FETÖ membership. Fatih Günay told his spouse there would be "incidents" soon and he would be home "on Nov. 22."

The prison administration also said in the report that detainees had developed encrypted methods of communication between each other and were working to collect information about the number of troops and other prison staff. A sketch showing the prison's power grid was among the things found, which prison administration believes would have been used for sabotage during a riot attempt. "They were trying to learn the watchtower guard's shifts and the locations of heavy weapons storage in the prison. They often fake illnesses to travel together to the hospital, so that they can communicate easier," the report says. It also warns about the probable success of a riot as the detainees are officers well trained in sabotage missions and covert operations.

Though most notes were filled with mysterious expressions, two sentences in one of the notes highlight the possible jailbreak. "The problems will be over when those inside meet those outside" and "Martyrs convene, the war begins."

Private broadcaster, NTV, reported that the number of prison guards was increased after the report was published and prosecutors launched an investigation into the allegations that some prison staff helped detainees to gather knowledge about the inner workings of the prison complex.

FETÖ operates in a secretive structure, with leaders and representatives at the district, provincial and national levels who both act as insiders and decision-makers steering the movement. The group faces heightened scrutiny after being accused of attempting to topple the democratically elected government in July 15 coup attempt, in which 246 people were killed and 2,200 were injured.

The government states that besides July 15, Gülenists have attempted two other coups since 2013 with falsified corruption probes through agents who infiltrated in the judiciary, police, intelligence and civil services.

FETÖ is designated as a threat to national security and terrorist cult, and stands accused of a long sheet of crimes, the latest being the July 15 coup attempt. FETÖ members are standing trials in which they are charged with illegal wiretapping of thousands of people, sham trials to imprison critics of FETÖ, money laundering, blackmail, extortion and forgery exploiting infiltrators within the police, judiciary, bureaucracy and military.