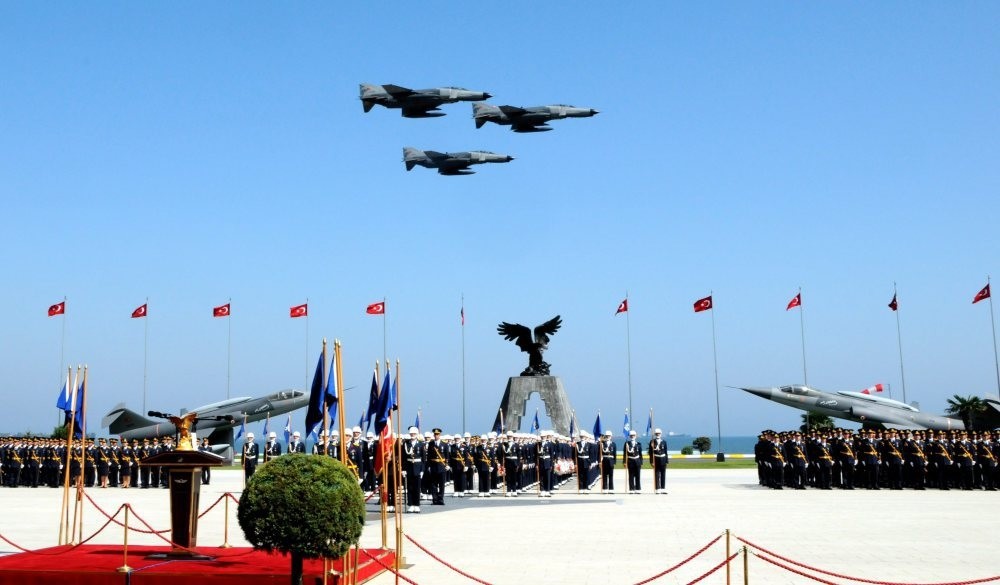 Fighter jets fly above cadets graduating from Air Force military school in Istanbul in 2010. FETu00d6 is accused of secretly installing its followers into military schools throughout Turkey.
by Daily Sabah Nov 08, 2016 12:00 am

Fighter jet pilots detained in operations following the July 15 coup attempt blamed on FETÖ, are revealing how the terror group strategically placed its followers in military positions with the utmost secrecy, avoiding detection by skipping prayers and distancing themselves from the group

More evidence has surfaced on how the Gülenist Terror Group (FETÖ), which was blamed for the July 15 coup attempt, infiltrated the Turkish Armed Forces (TSK) with ultimate aims to take over the Turkish state. Forty-four fighter jet pilots detained in an operation in the central city of Konya, a major hub for Air Force operations, described how the terror group dodged suspicion over FETÖ's activities and managed to place its own men into the army using deceitful practices. The pilots, who were among the 77 detained after the coup attempt, invoked their rights under the "remorse law" that allows for lenient sentences in exchange for testimony.

Speaking with interrogators, the pilots exposed the identities of "brothers" or non-military members of the terror group in charge of coordinating the recruitment and affairs of military officers - from arranging marriages to plotting the coup. The suspects, most of them in the early stages of their careers, have been members of the terrorist group for at least 15 years since their days in middle school and revealed how they were "programmed" into doing FETÖ's deeds. Their confessions, reported by the Sabah newspaper, uncover the possibly most secretive segment of the group's infiltration into the army as none of the suspects had attended Gülenist schools or communicated via Bylock, an encrypted messaging app exclusively used by Gülenists. Nor were their families aware that they were loyal to the group.

A common pattern in the testimony of the defendants was that most of them were contacted by FETÖ members while they were attending middle school. Brainwashed into recruitment, they were advised to join military schools and to accomplish that, they attended informal classes at "lighthouses," or unofficial dormitories run by Gülenists. Gülenists run a countrywide network of prep schools to help those studying for admission into universities or other institutions of higher education; however, the pilots were told not to enroll in prep schools affiliated with Gülenists. "Thus, we would not have any connection with [Gülenists] in our past lives," one pilot said. Several pro-coup officers who confessed to having links to FETÖ were discovered either through recruitment to the terror group while attending schools run by the group or were convinced to join at a later stage in their lives. The pilots who confessed said "brothers" overseeing new recruits always monitored them when they finally made it into the military schools.

They were strictly forbidden to practice Islamic deeds such as fasting, although FETÖ was primarily known as a group that emphasizes the importance of religion or, as critics put it, a tool of exploitation to gain more followers. Thus, they would avoid unwanted attention in the army regarding their religious background that could pave the way for an internal investigation and subsequently, reveal their ties to FETÖ. This continued well until their detention, the pilots confessed. As for praying, they were instructed to "pray with their eyes," a made-up form of praying popular among Gülenists who instead of kneeling or raising hands during Muslim prayers, simply move their eyes.

As was the practice for every FETÖ member, pilots were ordered to pay a fraction of their monthly salaries to the group in the name of "himmet" or "donation."

The pilots also revealed a previously unknown trait of the group. "Brothers" or senior cult members assigned to officers, were changed every two years so that they would not develop a bond with each other.

One defendant said FETÖ would choose the posts that officers loyal to them would be assigned to, thanks to previous infiltrators in the army. "We were given grades and those with the highest grades became pilots for F-16 jets and those with lower grades would be assigned to ground services." Although many were not qualified to fly fighter jets, they passed the exams and training based on their loyalty to the group and with the assistance of FETÖ-linked officers overseeing military school exams.

Prosecutors believe pilots and flight training staff linked to the terrorist group might have played a role in nine warplane crashes in the past two years. A report included in a draft indictment by prosecutors in the capital Ankara conducting a probe into the group's activities said the terrorist group, which infiltrated the army, bureaucracy, judiciary and law enforcement, installed supporters in the Air Force, most of whom were inexperienced and unskilled. The report, quoted by Turkish media outlets, points to nine crashes involving Air Force pilots that killed seven in the last two years and states a new inquiry into the crashes is needed, advising the Presidency's State Inspection Board to launch new investigations.

The terror group's clout in the TSK has been in the spotlight since the foiled July 15 coup attempt by a Gülenist junta. The indictment focuses on the Air Force, which is viewed as one of most infiltrated branches of the army by Gülenists. It says that the terror group forced skilled pilots not affiliated to the group to retire by blocking their promotion and helped those loyal to them - but lacking flight experience - to rise within the ranks of the Air Force.

The Air Force was at the heart of the putsch attempt, and Akıncı Air Base in Ankara was used as a launch pad for airstrikes on strategic locations in the capital on July 15.

A large number of pilots linked to the terrorist group were dismissed from the army following the putsch attempt, which saw the arrests and dismissals of thousands of officers, civil servants and others in the public sector working for FETÖ. The army faced a serious shortage of pilots after the dismissals, highlighting the extent of the terrorist group's infiltration, turning to former pilots and graduates of flight schools to fill the gap.
RELATED TOPICS