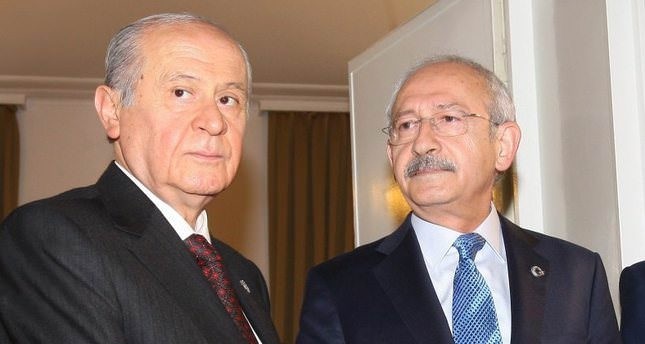 One of Kılıçdaroğlu's close guards and a new guard who started working for Bahçeli just 15 days ago were suspended Saturday after they were found to be Bylock users on the cryptographic message system.

The two guards were also among the 170 police officers suspended recently in an investigation carried out by the Ankara Police Department.

FETÖ is known for its prevalent use of apps for encrypted and open messaging.

Back in October, six of Kılıçdaroğlu's police security guards were claimed to have had links with FETÖ.

Reports said that two out of six police officers working for Kılıçdaroğlu were dismissed from their profession following the July 15 failed coup attempt for their alleged links.

Whereas the remaining four were among 12,801 officers suspended from duty on Oct. 3, following an investigation by the Ankara Police Department. The six police officers worked as security guards at Kılıçdaroğlu's house located in Ankara's Çukurambar district.

Testimonies from Gülenists in the bureaucracy detained after the July 15 putsch attempt point out the prevalence of the use of apps. Prosecutors say Bylock was popular among Gülenists for secretive communications between 2013 and 2015, and after 2015, the terror cult turned to Eagle IM, which offers "256-bit end-to-end AES encryption" for its users, according to the description on the app at the Google Play Store.

Investigations reveal both those in the lower ranks of FETÖ's infiltrators within state institutions and those in the upper echelons of the bureaucracy perused Bylock.