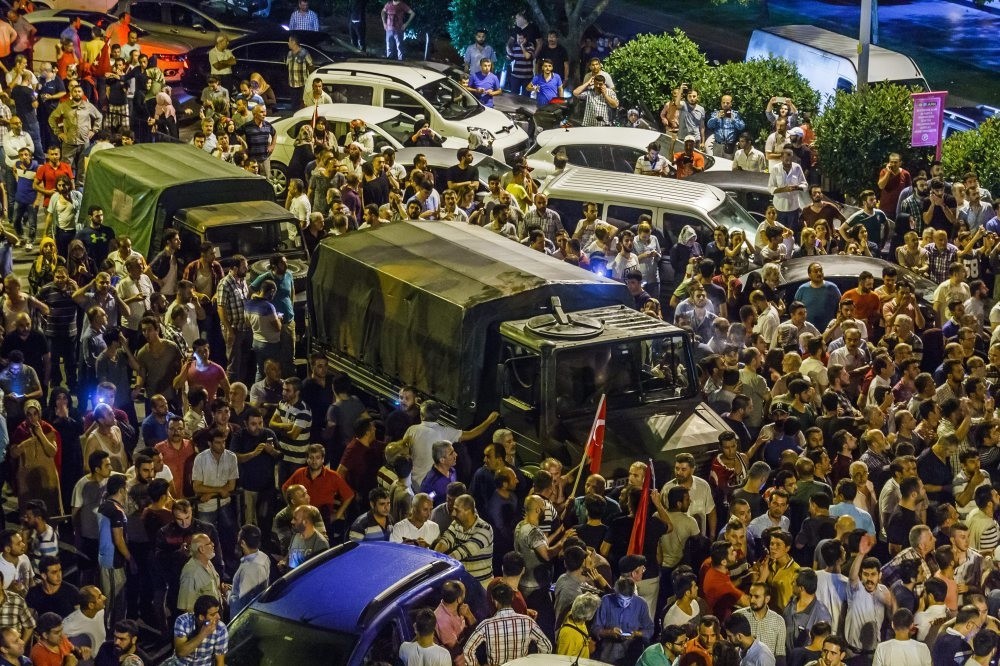 People surrounded military trucks at AK Party offices on the coup night. Their strong resistance ultimately led to the failure of the putschists.
by Daily Sabah Dec 07, 2016 12:00 am

Indictments are pouring in against pro-coup officers who took part in the foiled putsch attempt on July 15. In the latest turn of events, Istanbul prosecutors have asked for life prison terms for 74 troops involved in the illegal occupation of the ruling AK Party's Istanbul offices on the night of the attempted coup, where they were pushed back by a large crowd of unarmed civilians

A few months after the Turkish nation managed to quell a coup attempt, blamed on officers loyal to the Gülenist Terror Group (FETÖ), prosecutors have started wrapping up the indictments against the putschists. A new indictment approved by Istanbul's chief prosecutor's office has asked for the lifetime imprisonment of 74 suspects who tried to occupy the Istanbul branch of the ruling Justice and Development Party (AK Party).

This is the second indictment against the individuals who took part in the coup attempt in Istanbul. Several suspects were indicted in an earlier investigation of an invasion of the country's largest airport on July 15.

All of the suspects face three separate aggravated life terms, similar to other cases regarding the foiled coup which killed 248 people, including unarmed civilians resisting it, police officers and military officers. Fourteen suspects, all career officers, were jailed while remaining suspects were conscripts.

The Istanbul office of the AK Party was the target of the junta which also tried to seize the governorate, city hall and other strategic sites to quash any opposition to their coup attempt. The occupation attempt came shortly after the public noticed the presence of soldiers on the streets and on a major bridge in the city was the start of a coup attempt rather than an anti-terror drill as many were first led to believe.

On short notice, hundreds of citizens surrounded the building to fend off the coup soldiers who were confronted by the AK Party chairman for the city and a few other party members inside the building.

AK Party lawmaker Metin Külünk later joined the crowd and managed to convince the pro-coup troops to turn themselves in.

The indictment, whose contents were revealed by media outlets, states a colonel and a major stationed at a military school in the city were the masterminds of a plan to capture the AK Party building.

Two officers, joined by other unidentified individuals linked to FETÖ, designated Major Faruk Şimşek as the officer responsible for capturing AK Party offices. As the troops elsewhere in Istanbul were moving to capture government buildings, a military convoy of eight trucks and armored vehicles drove to the party's headquarters in Sütlüce, Istanbul.

The coup plotters managed to drive off several police officers and private security guards outside and inside the building while some guards refused to leave. The indictment said a pro-coup officer asked the party's Istanbul chairman Selim Temurci to evacuate the premises but the chairman refused. The soldiers only accepted to leave and later surrender after lawmaker Metin Külünk and the crowd convened outside the building finally convinced them. Temurci recounted the events of that night in an interview saying it was a time of support against the coup and people from all over flocked to the party building.

The indictment also said Col. Sadık Cebeci was responsible for the deployment of the troops to the site and it adds Cebeci was the one who ordered them to fire on the public gathered around the building. Several citizens scuffled with the soldiers as their entrance to the building was blocked.

The Turkish public learned of the coup in Istanbul, Turkey's most populated city that lies on a strategic location between Asia and Europe, when images of soldiers blocking a major bridge in the city flashed on TV screens. Soon thereafter, people heeding the calls by the country's leaders to oppose the coup flooded the streets. That night, several innocent civilians were killed on the Bosporus Bridge by putschist soldiers who indiscriminately opened fire on the flag-waving crowd opposing them.

Last month, an Istanbul court accepted the first indictment on the coup attempt in which 29 police officers were accused of aiding pro-coup forces. The police officers face lifetime imprisonment for helping the pro-coup soldiers and efforts to break public resistance. Defendants disobeyed orders to stop the coup plotters and some even celebrated it, the indictment said.

In their attempt to capture strategic locations, coup plotters also tried to take control of the Atatürk International Airport on the European side of Istanbul, but again, they failed to do so after police and the public occupied the place.

Thousands of military officers with links to FETÖ have been arrested and dismissed from service following the coup attempt. Authorities say trials on the coup will start next year, while a large courthouse complex is under construction in Ankara to house hundreds who will stand trial on coup charges.
RELATED TOPICS