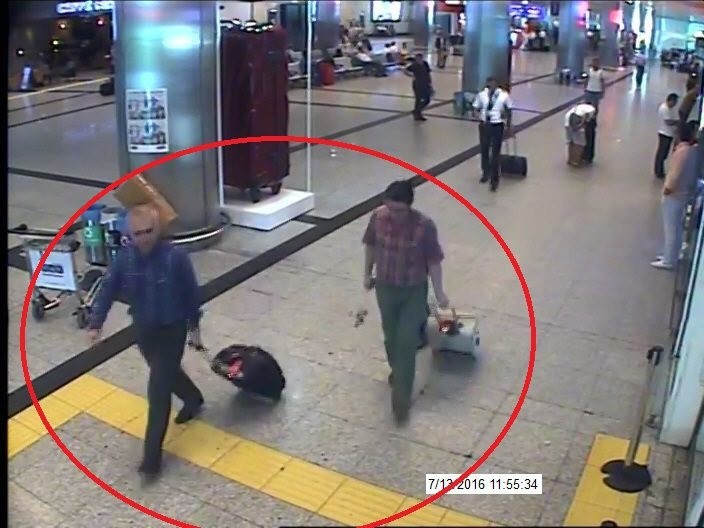 Seemingly not connected to each other, four non-military men, including a senior FETÖ figure detained on the coup night at a military base, actually traveled to terror cult leader Fetullah Gülen’s U.S. residence before the July 15 coup attempt to discuss the putsch plot, prosecutors revealed

More evidence has surfaced concerning the Gülenist terror cult's (FETÖ) role in the July 15 coup attempt. The chief prosecutor's office in Ankara, currently in charge of the investigation of the FETÖ's involvement in the coup, found that four non-military figures detained at a military base in the Turkish capital on the night of the coup attempt, had traveled to the United States on the same day and discussed a plot to topple the government with the aid of Gülenist military officers.

Adil Öksüz, Kemal Batmaz, Nurettin Oruç and Hakan Çiçek were the four men captured by security forces in and around the Akıncı base after the coup attempt was quelled. Öksüz was a theology lecturer, while Batmaz was the former manager of a paper company. Oruç was a filmmaker, and Çiçek was the owner of a private school chain. This odd mix of civilian figures among dozens of military officers on the coup night triggered an investigation. Öksüz managed to disappear after he was released hours after being detained in a controversial verdict by judges who are now also facing an investigation for ties to FETÖ.

Deepening the inquiry, Ankara prosecutors discovered the four men's links to FETÖ, which has a nationwide following and infiltrators almost everywhere, from the military to police and bureaucracy.

Quoting sources from the chief prosecutor's office, the Anadolu Agency (AA) reported that the men, viewed as "civilian imams" of FETÖ or point men appointed by the cult to oversee the activities of its infiltrators in the army, traveled to the United States where FETÖ leader Fetullah Gülen resides on the same days in January, March and June this year, although they traveled separately - apparently to dodge suspicion - as the terror cult was already facing a crackdown due to its two coup attempts in 2013. Öksüz and Batmaz were discovered walking together at an Istanbul airport, proving their links though Batmaz has denied this.

A report by AA says the four men convened to discuss an upcoming coup on March 21, the day when Gülen donned khaki garb and delivered a sermon to his followers, something that is now viewed as a signal to execute the coup to its followers in the army.

Although concrete evidence is not available with Öksüz still on the run, Batmaz is believed to be a figure higher than him in the hierarchy of the terror cult. But it was Öksüz who apparently worked the most for the terror cult, as he was a frequent flyer to the United States despite retaining a post at the university that did not require traveling abroad very much. Öksüz was also a frequent traveler to the capital Ankara from his hometown Sakarya in northern Turkey, and based upon confessions of former FETÖ members detained after the coup attempt, on several occasions Öksüz met with coup officers to plan the putsch attempt while in the capital.

Çiçek, Oruç and Batmaz are currently in detention in a prison in Ankara. Harun Biniş, another suspect who reportedly traveled to Ankara with Batmaz, was also arrested. Biniş was found to be one of the civilians freely roaming the halls on the command floor of the Akıncı air base, and he now faces charges of being a member of a terrorist group, FETÖ. Biniş was a former employee of a telecoms authority where the terror cult had a large number of infiltrators. An IT expert, Biniş, who was earlier implicated in an illegal wiretapping case, is accused of helping coup plotters at the base.

Investigators are now looking into the trips the military officers took to the United States in an attempt to find links between "civilian" Gülenists and infiltrators of the terror cult in the army that killed some 248 people resisting the coup on July 15.

They earlier announced that six men in civilian clothes accompanied Öksüz on the flights. One of them was Bünyamin Tuner, a former aide to Yaşar Güler, who was vice chief of staff at the time of the coup. The coup plotters held Güler along with other top military brass. Tuner and Öksüz flew to the United States together in June 2015 and returned to Turkey on the same plane. According to a statement by Salih Zeki Çolak, commander of the Turkish Land Forces, Tuner headed the team of pro-coup troops that held him hostage on July 15.

Another who boarded a flight with Öksüz to the United States was Gen. Baki Kavun, who heads the department of operations in the Office of the Chief of Staff. Mehmet Partigöç, a general accused of penning the declaration of the coup plotters, also joined Öksüz on a 2006 flight to the United States.

Öksüz is in the "red" category on the Interior Ministry's most wanted terrorists list, which includes terror suspects with the highest rewards for their capture.

Thousands of military officers were dismissed from the army and arrested following the coup attempt. A string of confessions by officers seeking sentence reduction reveal they were recruited by the terrorist group in the early stages of their careers and were appointed by "brothers" like Öksüz who were overseeing their infiltration process.