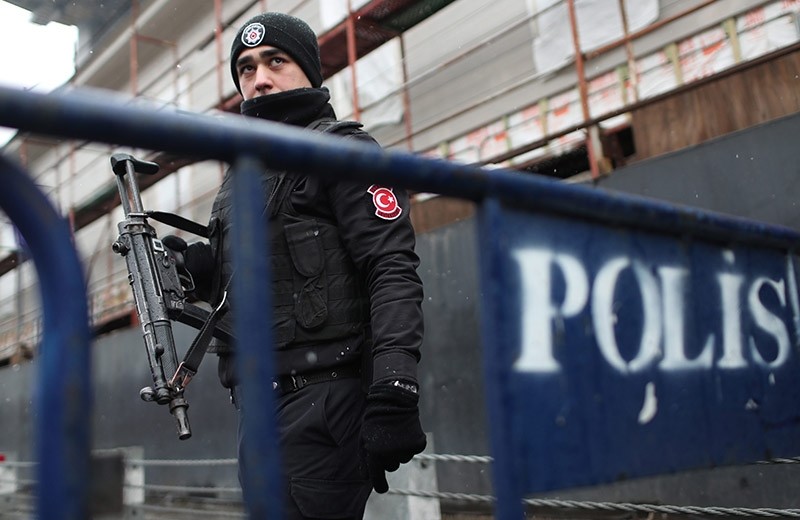 An armed Turkish riot policeman stands guard nearby the site following a gun attack on Reina, a popular night club in Istanbul near by the Bosphorus, in Istanbul, Turkey, 01 January 2017 morning. (EPA Photo)
by Daily Sabah Feb 08, 2017 12:00 am

Ten suspects accused of involvement in the terror attack on the Reina nightclub in Istanbul on New Year's Eve have been taken to court , the Istanbul Police Department announced on Wednesday.

The suspects face a number of charges, including 'being a member of an armed terror group'.

Abdurrauf Sert, one of the ten suspects, was also facing 39 aggravated life sentences over voluntary manslaughter, the police department said.

Another suspect named Muhamed Ebulhasan received weapons training in Afghanistan along with the Reina nightclub attacker, Abdulgadir Masharipov, and even met him four times before the deadly attack in Istanbul's Ortaköy district, the statement elaborated.

Four other suspects were in contact with the Daesh official, code-named 'Tulpar' , who organized Masharipov's escape and concealment, while another suspect was in touch with the persons who provided logistical help to the attacker.

Three other suspects were in contact with Mustafa Dursun, the fugitive suspect who is believed to have planned the Reina attack, and were detained in Turkey's southern Hatay province while trying to cross the border into Syria to rejoin the terrorist organization.

One of them had a notebook containing details of how to build explosives, the statement added.

At least 39 people, including a police officer, were killed when suspected attacker, Abdulgadir Masharipov, opened fire on partygoers at the Reina nightclub in Istanbul's Ortaköy district early New Year's Day.