FETÖ-linked troops to stand trial over plot to kill Erdoğan 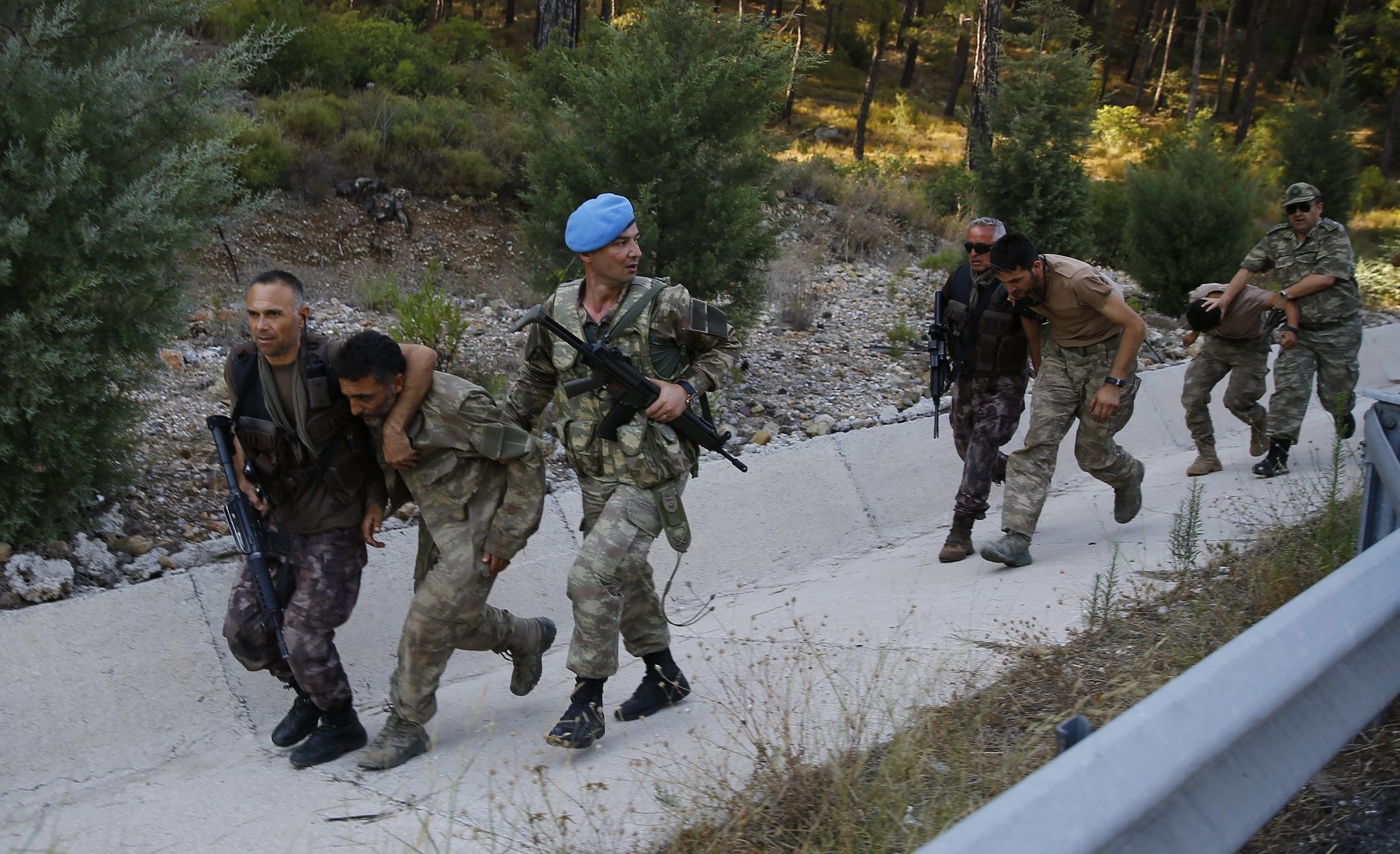 Security forces accompany pro-coup troops captured days after they went into hiding in a forest, after their plot to kill Erdou011fan was foiled.
by Daily Sabah Feb 20, 2017 12:00 am

More than 40 pro-coup troops linked to FETÖ are set to appear before a court today. They face life imprisonment for attempting to kill President Erdoğan at the vacation resort he was staying at during the July 15 coup bid

A much-anticipated trial in the aftermath of the July 15 coup attempt is set to start today in Muğla, a southwestern province. Forty-four defendants, all pro-coup troops, face life imprisonment for their role in a plot to kill President Recep Tayyip Erdoğan during the foiled putsch bid for which the Gülenist Terror Group (FETÖ) is being blamed.

President Erdoğan, his family and entourage were on vacation staying at a hotel when pro-coup troops moved to kill him. Two police officers guarding the hotel were killed while Erdoğan and others, alerted about the plot a few hours before the team of assassins arrived at the place, managed to escape. The president's survival was critical to foiling the coup attempt as he later rallied the public to take to the streets stand against the putschists.

The sheer number of defendants, and 74 plaintiffs, forced authorities to relocate the first hearing from a local courthouse to the larger conference venue of the local trade chamber. Security measures were stepped up in and around the venue where checkpoints and security barriers were set up.

Chief Prosecutor Necip Topuz, who will grill the defendants, noted the trial as the "only coup-related case where the president is the direct plaintiff" and says it will be "historically important."

Fetullah Gülen, an elusive former preacher and more importantly the leader of FETÖ, is the prime suspect in the case. He is being regarded as the mastermind of the assassination attempt and the overall coup attempt. Gülen, who currently resides in a retreat in Pennsylvania, United States, will be tried in absentia.

Meanwhile, two other suspects, military officers who disappeared after the putsch bid was quelled, will also be tried in absentia.

Suspects face a diverse array of charges, from the assassination of the president, crimes against the constitution, attempted homicide and lesser crimes of property damage and home invasion.

Thirty-seven troops including one, who remains at large, face charges that carry penalties of life imprisonment.

The trial, expected to continue at least throughout this year, is probably the largest of its kind for Muğla, a city on the country's southwestern tip, known for its pristine beaches and is a favorite destination among local and foreign tourists.

Days before the start of the trial, security forces installed a checkpoint outside the conference hall of the Muğla Chamber of Trade and Industry where the trial will be held. An X-ray device was also installed and only a handful of journalists, lawyers and relatives of the defendants will be allowed in after they are searched by police.

Speaking to reporters, Necip Topuz said they also allocated a space for the families of those killed in the attempt to assassinate the president. Topuz and his team launched the criminal inquiry just hours after the coup bid was quelled.

"We wrapped up the inquiry in about five months and sent the indictment to court. Among 47 defendants are three generals. One of them is directly involved in the assassination attempt in the Marmaris district of Muğla, where Erdoğan's hotel was located, and two other generals who assisted in the plot," he said.

Topuz said it would be a trial that would attract major public interest. "If the plot that is on trial here succeeds, things will be dramatically different," Topuz said.

The indictment against the soldiers says Gülen personally approved the plan to capture or assassinate Erdoğan during the putsch attempt, like he did for other coup plans. He gave orders such as the captures of strategic locations from the presidential palace to the army's headquarters.

As the coup attempt broke out, Erdoğan was informed about suspicious military activity across the country. With the aid of pilots loyal to the state, the president was able to dodge the attempt on his life, though pro-coup troops also tried to block the airport where he was secretly flown away to safety.

While media outlets speculated that Erdoğan had fled abroad, the president emerged in Istanbul. As the coup attempt was unfolding, Erdoğan addressed the nation at a press conference, just a few hours after which he gave a historic live speech via FaceTime, where he called the public to remain firm, ultimately dashing putschists' plans to keep resistance at a minimum.

The indictment also adds that coup troops met in a hotel in the capital Ankara a week before the attempt to discuss the plot against the president.

According to the plan, the coup soldiers would abduct Erdoğan from the Grand Yazıcı Hotel and take him to the Akıncı Air Base in Ankara, the headquarters of the coup soldiers and if that failed, they would kill him on the spot.

Brigadier Gen. Gökhan Şahin Sönmezateş, now in jail for his involvement in the coup, was ordered to head the assassination plot by Gülen himself. Sönmezateş was in control of the team who went to Marmaris to carry out the assassination plan. The team included 14 officers from the Special Forces Command, 12 soldiers from the Search and Rescue Team and two Underwater Offense (SAT) commandos.

Talking at the Çiğli Air Base in İzmir before the plan took place, Sönmezateş said, "A coup is being staged at the moment. We are following the orders of the General Staff. We take our orders from Gen. Hulusi Akar. Bring Mr. President Recep Tayyip Erdoğan to Ankara; alive if possible, dead as a last resort. Die if you must but definitely take him to Ankara."

Sönmezateş confessed that he had committed a major crime trying to capture the president.

In the operation to kill the president, around 25 soldiers in helicopters raided his hotel, coming down on ropes and shooting at presidential guards and the police officers left to guard the premises just minutes after Erdoğan managed to escape.

Although the Gülenists deny any link to the coup, the testimonies of captured pro-coup troops who invoked a remorse law for a reduced sentence revealed their links to the terror cult.

Zekeriya Kuzu, a sergeant who immortalized the fight against the putschists, said in his testimony that all the soldiers involved in the assassination attempt, were members of "Hizmet," the name Gülenists gave their movement. Sgt. Kuzu is regarded as a hero after a photo of him staring at the pro-coup troops who had captured him surfaced on social media after the putsch was quelled.

Emerging as a major national security threat a few years ago, FETÖ enjoyed free rein even after its members were branded terror suspects. This was mostly thanks to its infiltrators in the state who thwarted investigations against the group.

Now, in the aftermath of the coup attempt, FETÖ faces a new wave of trials. A total of 1,235 lawsuits were filed against FETÖ after the attempted putsch that left 248 people dead. Out of those, 78 of the lawsuits are directly related to the coup, allegedly carried out by military officers loyal to the U.S.-based preacher and his sprawling empire of companies and schools.

The coup trials alone have 1,986 defendants, with 1,232 of them currently being held in custody in 21 provinces. The first trials opened last year in Denizli and Erzurum, and more followed in Ankara and Istanbul.
RELATED TOPICS