No FETÖ, no coup, defendants claim in July 15 trials 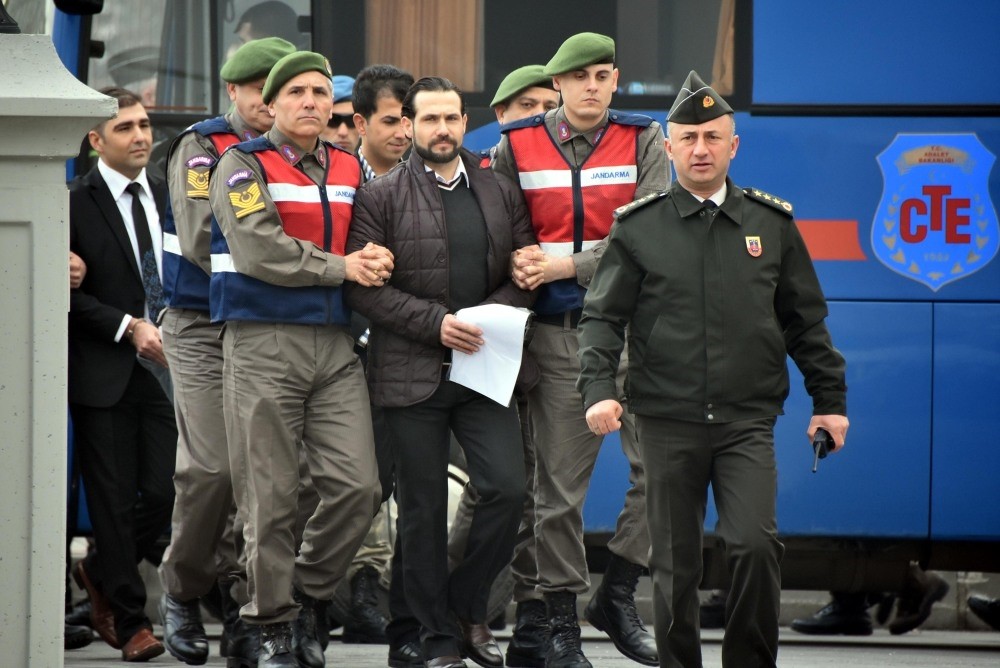 Gendarmerie officers escort Ali Saru0131bey to the courtroom. Saru0131bey, a lieutenant who was in the team of assassins sent to kill Erdou011fan, testified at yesterday's hearing in the city of Muu011fla.
by Daily Sabah Feb 23, 2017 12:00 am

Dozens of people were killed and the president escaped an assassination attempt but pro-coup officers are playing dumb, claiming they were not aware that July 15 was a coup attempt and they are not members of FETÖ, in a common defense to dodge blame

Important trials regarding the July 15 coup attempt blamed on a small junta loyal to the Gülenist Terror Group (FETÖ) are underway but almost all defendants who have testified so far claim they did not know a coup attempt was unfolding when they were dispatched to kill the president and take over a military base. They also claim they are not members of FETÖ despite the mounting evidence showing how the terror cult planned it. This is a common defense strategy to distance FETÖ from the coup, a lawyer for the plaintiffs said.

Weeklong hearings into the case of elite troops sent by coup leaders to assassinate President Recep Tayyip Erdoğan and the case of the killing of Ömer Halisdemir, an anti-coup officer who became a symbol of anti-coup resistance continued yesterday with new testimonies from the defendants. The defendants, mostly of low ranks in the military, denied their links to FETÖ, which is accused of masterminding the coup attempt and claimed they were not aware that they were working for putschists. This is the common pattern among the defendants since the first hearings as they each face life imprisonment for the coup attempt and links to a terrorist group. Worse may be in store for them as Ankara mulls reinstating the abolished death penalty for coup officers "if the public demands it" as the president and prime minister signaled earlier.

In yesterday's hearing in Muğla, a southwestern city where President Recep Tayyip Erdoğan and his family were staying when the assassins were sent to kill Erdoğan, Ali Sarıbey testified. Sarıbey, a SAT commando (a unit similar to the U.S. Navy Seals), was a member of the team of assassins who tried to take out Erdoğan. Erdoğan escaped at the last minute and his survival spelled the end for the putsch attempt as he later flew to Istanbul and rallied the crowds to stand against pro-coup troops.

Sarıbey said he was trained to be "a killing machine" and claimed he was "happy" when his superiors told him he would be deployed in "an anti-terror operation." Other defendants have also claimed that their superiors told them they were sent to Erdoğan's hotel under the pretext that they would capture a senior terrorist figure. Sarıbey denied links to FETÖ.

The defendant said he joined others on the orders of Haldun Gülmez, another pro-coup officer. "When I asked him about the mission, he said it was confidential. Then, we gathered for a briefing by Gökhan Sönmezateş (the general accused of organizing the plot to kill Erdoğan). He told us the army seized power in Turkey and we were bound to follow the orders of the army headquarters. He also told us that we were tasked with rescuing a 'VIP' but he did not give his name," Sarıbey said. "Sönmezateş asked us if any one of us opposed the mission but nobody opposed it," he said.

Sarıbey added that there were two teams acting together and they were "acting like amateurs" and he only thought they were ordered to protect "some governor or police chief" and never thought it would be the president. Like other members of the assassination teams, he claimed he did not see who shot at who when they were engaged in a shootout with presidential guards protecting the hotel. He claimed he only noticed they were in a shootout with police officers when they captured them. Sarıbey also said he considered surrendering but "couldn't do so as he was under heavy fire by police," though he did not explain why he did not surrender days later when he and others were captured after a manhunt.

Speaking to the reporters on the sidelines of the trial, Hüseyin Aydın, the lawyer representing President Recep Tayyip Erdoğan in the case, said the testimonies in the three days highlighted "an effort to clear FETÖ of coup charges" and defendants "developed a common defense strategy." "Except minor differences, we see a common strategy in their testimonies. Their testimonies match with the current propaganda by FETÖ supporters, which say that the terrorist group was not involved in the coup attempt. Defendants say they have no links to (FETÖ) though we know some even had Bylock (an encrypted messaging app exclusively used by FETÖ members). It is also suspicious that some defendants claim they knew others were not linked to FETÖ. For instance, Taner Berber (one of the defendants testified on Tuesday) first said he was not acquainted with other members of the team of assassins, yet he openly said these men he did not know very well were not members of FETÖ," Aydın said. The lawyer also touched upon the defense strategy likened to the blame game. "They say they acted in line with the chain of command and followed the orders and thus, try to avoid responsibility for their crimes. Ali Sarıbey, for instance, described himself as a brave and patriotic officer and acknowledged he learned it was a coup attempt before he was sent (to assassinate Erdoğan). Yet, he did not resist or disobey this illegal order. He knew that ordering a coup is something illegal, yet he joined them. He said he 'had to' when I asked him at the courtroom why he did not resist. I told him, 'Thousands of untrained, unarmed people took to the streets to confront the coup but you, a specially-trained officer, a brave man as you described yourself, bowed down to this threat,'" Aydın said.

In the capital Ankara, it was the second day yesterday in the trial of pro-coup troops accused of being involved in the killing of Ömer Halisdemir, a Special Forces officer. Halisdemir posthumously has been hailed as a hero for killing Semih Terzi, a pro-coup general who attempted to take over the Special Forces headquarters in Ankara. Like the defendants who testified before them on Tuesday, the officers who accompanied Terzi and others in the coup attempt, denied they were aware of the military coup and denied involvement. Halit Çelik, a noncommissioned officer among the 18 defendants, said he believed he and other soldiers accompanying Terzi were "flying to Ankara to save the army chief" when he heard about a coup attempt underway. He said his superiors did not tell him where they were going to and he did not ask either. Çelik said he was walking behind Terzi when he was shot and did not see who shot him. He said he only learned about the "treason" of Terzi after other officers he came across at Special Forces headquarters told him. Harun Topbaş, another noncommissioned officer, parroted the testimony of Çelik and claimed he believed they were sent to quell the coup attempt.

FETÖ, led by Fetullah Gülen, a retired preacher who now resides in the United States, had waged a campaign against the government a few years ago and thanks to its infiltrators within the police, judiciary, bureaucracy and military, first orchestrated sham trials to implicate senior figures on forged evidence and ultimately, moved to seize power by employing officers loyal to them in the coup attempt. A total of 248 people were killed and many more were wounded in attempts to quell the putsch. Fetullah Gülen and his aides face multiple life sentences for the coup attempt and a string of crimes. Gülen has rejected claims that he was behind the coup attempt but evidence collected so far unearthed links of key officers in the coup to the terrorist group. Prosecutors say Gülen personally approved of the coup plans and Adil Öksüz, a senior figure in FETÖ, masterminded the plans in a secret meeting with generals involved in the putsch bid. Öksüz remains at large while Turkey seeks Gülen's extradition from the United States.
RELATED TOPICS