Coup troops stick to denial in new week of trials 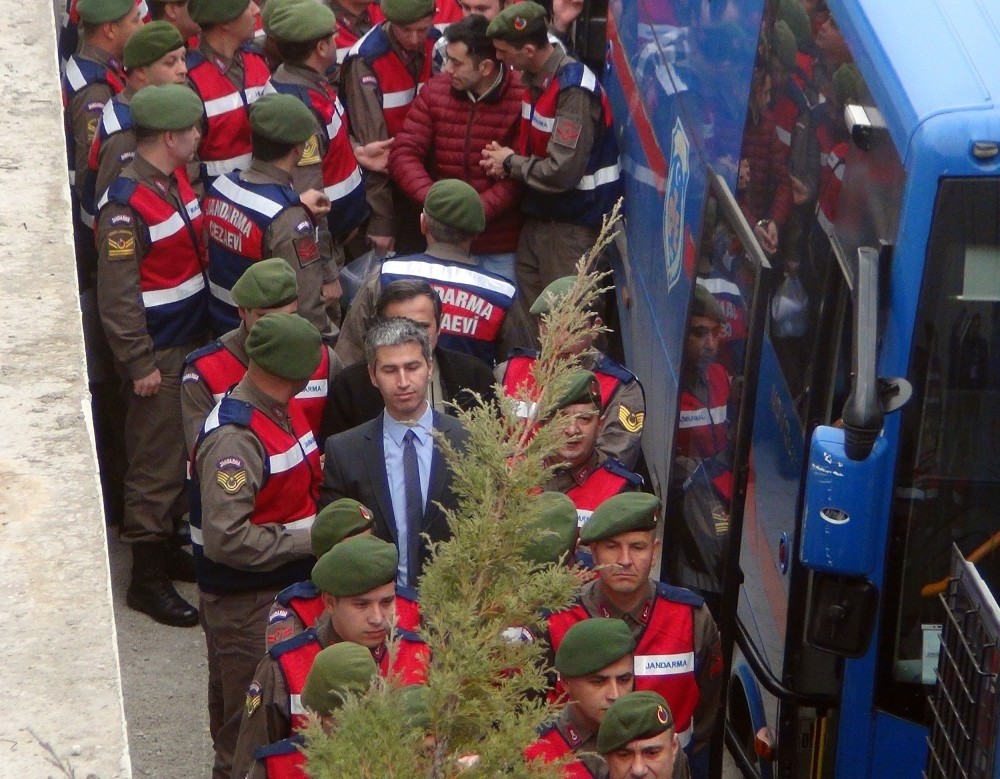 A new week in the trials of pro-coup troops for their roles in the July 15 putsch bid, which has been blamed on FETÖ, has started. An officer sent to assassinate the president told the court he never intended to kill ‘someone heading the nation' and said though he is opposed to coups, he joined it anyway ‘to follow orders'

A new set of hearings has commenced on Monday in the trials of pro-coup troops that are being tried for their roles in the July 15 putsch attempt that is being on the Gülenist Terror Group (FETÖ).

The biggest trial, with over 240 suspects, began in the capital Ankara while the second week of trials began for the team of assassins sent to kill President Recep Tayyip Erdoğan during the putsch bid.

The defendants, similar to earlier trials of other troops who took part in the coup, maintained their innocence and claimed they simply followed the orders of the military junta.

A captain in the team of assassins, dispatched to Muğla where Erdoğan was staying at the time of the putsch, even claimed he never thought he would kill "someone heading the nation" and he and others were there to actually "take him alive."

In the southwestern city of Muğla, the rest of the 47 defendants who were unable to testify in last week's hearings appeared before a court on charges of attempting to assassinate President Erdoğan.

Capt. İsmail Yiğit, a Special Forces officer who was among the members of the two teams sent to kill the president, claimed they went to Erdoğan's hotel to take him alive, not to assassinate him. He even blamed Erdoğan for leaving his presidential guards behind after he fled the hotel with minutes to spare upon learning that a coup attempt was unfolding across Turkey.

Yiğit denied that his team fired upon the guards, saying that it must have been another team of pro-coup troops who arrived earlier than them who opened fire at the president's guards at the hotel. Two police officers who were on duty protecting the president were shot and killed by the team of would-be assassins.

The dismissed Special Forces officer also denied his links to FETÖ, saying he would be "a rich man" if he were a member of the cult which wielded a broad clout in the military, police and judiciary before the coup attempt.

During the hearing, Yiğit also praised his commander, Maj. Şükrü Seymen, who was the only defendant in the trial to admit that he, indeed, volunteered for the coup and it was him who masterminded the assassination mission.

"He is a man every soldier idolizes," Yiğit said, referring to Maj. Seymen. "He told us to take the president alive."

Yiğit went on to say that he never intended "to kill someone heading the nation." He also added that he opposed any form of the coup but he had to "follow orders."

"You cannot question the orders of your superiors," Yiğit said, resorting to a common defense among other defendants, who proceeded with their mission to kill the president even though they knew their target was the elected leader of the country.

Selman Çankaya, a sergeant in the team of assassins, told the court he did not know about the coup attempt and denied his links to FETÖ.

"We were told that we would take a senior militant of an unspecified terrorist group," he said, referring to the orders he received during the coup attempt.

Lt. Muhammed Burak İpek, another defendant that was part of the assassination team, said his superiors told him the army had seized power and he was forced to follow orders.

"I couldn't disobey the orders," İpek said, blaming the presidential guards at Erdoğan's hotel. "We would not have fired at them if they didn't." In the capital Ankara, a trial of 330 suspects, some in absentia, began inside the Sincan prison complex where a courtroom touted as the biggest in the country is located. It was the first trial in the newly inaugurated courtroom capable of holding more than 1,500 people at the same time. The defendants were mostly from a military academy where artillery and missile units are trained. They are being charged with murder or attempted murder as well as attempting to overthrow the elected government, which carries a penalty of multiple life sentences. The first suspect, a military cadet called Abdulkadir Kahraman, told the court that on the night of the coup the troops had been informed by their commander that there had been a terror attack and were given ammunition afterwards.

Other suspects gave similar statements, including Arif Ozan Demir who told the court that the commander told them there had been an attack and that they should "be prepared."
RELATED TOPICS