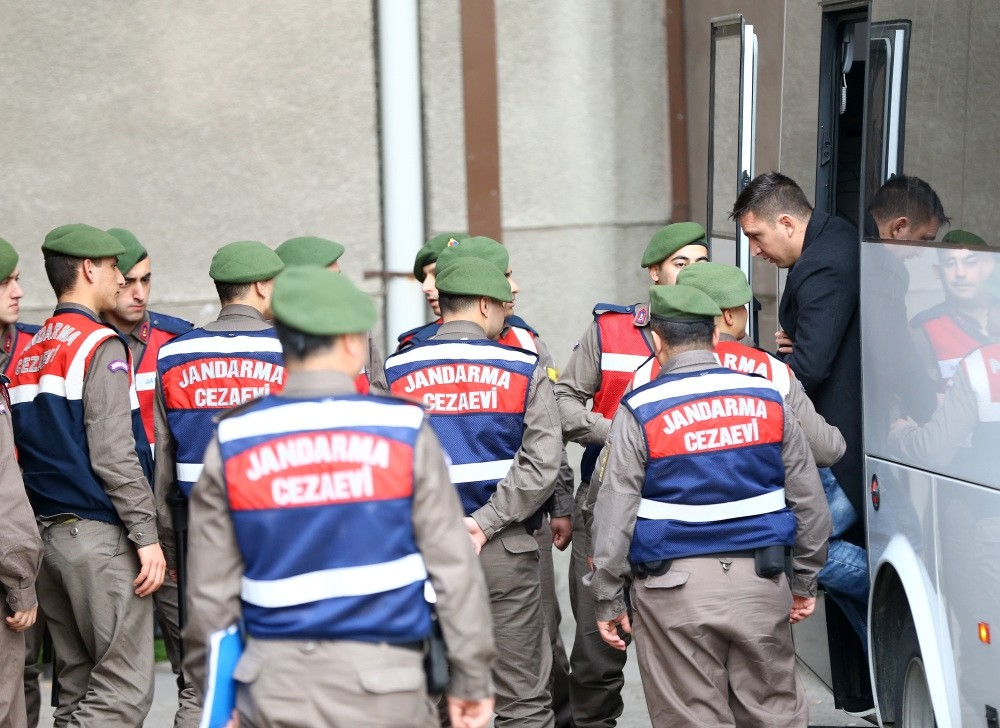 Gendarmerie officers escort a defendant stepping out of a bus into the courtroom before a trial of pro-coup troops in Ankara.
by Daily Sabah Mar 02, 2017 12:00 am

A military officer has confessed his links to the terror group FETÖ, whose members are blamed for the July 15 coup attempt, at a trial in the capital Ankara. His confession stands out among many other defendants who flatly deny having any such ties to the terrorist network

As the July 15 coup trials continue with most suspects sticking to their routine defense of completely denying their links to the Gülenist Terror Group (FETÖ), which is accused of orchestrating the coup attempt, one officer has confessed to his ties to the terrorist group, claiming he was not "used" by the terrorist group during the putsch. Testifying in Ankara where troops are being tried for their involvement of an attempted takeover of the Special Forces Command headquarters, Bekir Kurt, a noncommissioned officer, acknowledged he had been recruited by FETÖ in his school years, long before he enlisted in the army. Kurt said a few days before the coup, a "brother" told him to help "an officer" if the said officer asks for his help.

Kurt was stationed at the base the coup night.

The coup attempt is believed to be the work of a military junta controlled by FETÖ's leader Fetullah Gülen, a U.S.-based former preacher who was also behind two other attempts to topple the government in 2013, according to the prosecutors.

Through his subordinates in the cult, Gülen masterminded the coup attempt to seize power in the country where he already faces multiple life terms for a string of other crimes.

Kurt was among 69 defendants in the case where pro-coup troops who sought to render Special Forces ineffective on July 15 as this military unit had the capacity to quell any putsch attempt. The putsch attempt was staved off at the cost of 248 lives, mostly civilians who died confronting putschists.

Kurt's name was found in a list that was in the possession of Col. Ümit Bak, another military officer being tried in the case, as one of officers who would join the coup though Kurt claimed yesterday that he did not play a role in the putsch attempt.

The defendant said he was "a child" when he first met the "cemaat" (the congregation - a word commonly used to refer to FETÖ which had originally posed as a religious charity) and he has always been in contact with FETÖ members during his school years and military career.

Kurt claimed he did not see any "evil" in the people he met and the group never demanded anything "illegal" from him. Kurt also tried to vindicate the terror cult, saying they might not have had anything to do with the previous attempts to overthrow the government.

He said it was "too late" when he noticed FETÖ was "a network of traitors" on the coup night and said he wanted a sentence reduction as he already helped prosecutors identify FETÖ members in the army.

Kurt said the last time he met a FETÖ member was on July 12. The member he was referring to was a man code named "Nesimi" and a "brother," a non-military point man of the terrorist group whose job was to relay the orders of the cult to military officers loyal to the group.

"He told me there were problems in the country and if I would help if an officer asked for my assistance about 'an issue related to the cemaat.' I asked him who that officer was and he told me the officer already knew who I was," Bekir Kurt told the court.

Kurt said he was stationed at a spot in the base far from "clash zone" referring to the shootout between pro-coup and anti-coup troops on July 15 and he hid in his room when he saw unknown armed people near him. He claimed he did not know that a coup was taking place until he saw the situation on a TV set in the base on the night of July 15, the coup day.

On his years with FETÖ, Kurt said he stayed at houses shared by FETÖ members while he was going to school and attended the group's meetings, claiming they only talked about religion. He also admitted he started giving a fraction of his salary every month to FETÖ when he started his military career.

In the coup trials that started in December, hundreds of defendants involved in the putsch bid are being tried and most of the defendants are those in the lower ranks of the military.

Legal experts say that the defendants resort to common defense strategy of denying their links with FETÖ and claiming they were "only following orders" from their superiors on July 15.

Although the trials of top military brass is yet to begin, current evidence shows most officers were users of ByLock, an encrypted messaging app almost exclusively used by FETÖ members, and they attended meetings with non-military members of the terror cult to plan the coup.

Elsewhere, more than two dozen defendants are being tried for an attempt to assassinate President Recep Tayyip Erdoğan. All of the soldiers involved in the assassination attempt on the president appeared at the second hearing of their trial in the southwestern city of Muğla, where Erdoğan was on vacation at the time of the coup attempt.

Like nearly all of the other defendants before them, the would-be assassin suspects said they were "simply following orders" and they did not in fact intend to kill the president. They claimed they were dispatched to capture Erdoğan "alive" by "martial law commanders," although they failed to explain why they were carrying caches of thousands of ammunition.

Erdoğan escaped the hotel with just minutes to spare after he learned that a coup attempt was unfolding across the country.

Speaking at yesterday's hearing, Ekrem Benli, a pro-coup officer among the assassination attempt suspects, said he only learned about the identity of their target after he was captured.

"Maj. Taner Berber (one of the leaders of the two teams of assassins sent to take out Erdoğan) told us we were on a mission to capture a terrorist group leader," he claimed, adding that he did not fire at police officers guarding the hotel and his fellow pro-coup officers only fired into the air.

Erkan Çıkat, who was also part of one of the two teams of assassins, said he did not know about the coup attempt and he was summoned to his military base on the coup night for "an anti-terror operation."

Çıkat said they loaded 15,000 automatic rifle ammunitions to helicopters and set out for Muğla. He said Brig. Gen. Gökhan Şahin Sönmezateş, another defendant who is accused of masterminding the mission to kill the president, later told them that martial law had been declared. Çıkat also claimed he was not linked to FETÖ.

Yakup Özcan, another defendant, said he did not know they were sent to Muğla for Erdoğan until Maj. Şükrü Seymen asked someone near the president's hotel about Erdoğan's whereabouts. He said he fired randomly when "gunmen" fired at the hotel while they were inside.

Two police officers deployed at the hotel to protect the president were killed by the team of assassins. Özcan said that "fighter jets could have easily killed the president" and sending assassins would not have been necessary if they had sought to kill Erdoğan. He did not answer when the judge asked him why they took so much ammunition with them if fighter jets could have done "the job."
Last Update: Mar 02, 2017 1:10 am
RELATED TOPICS