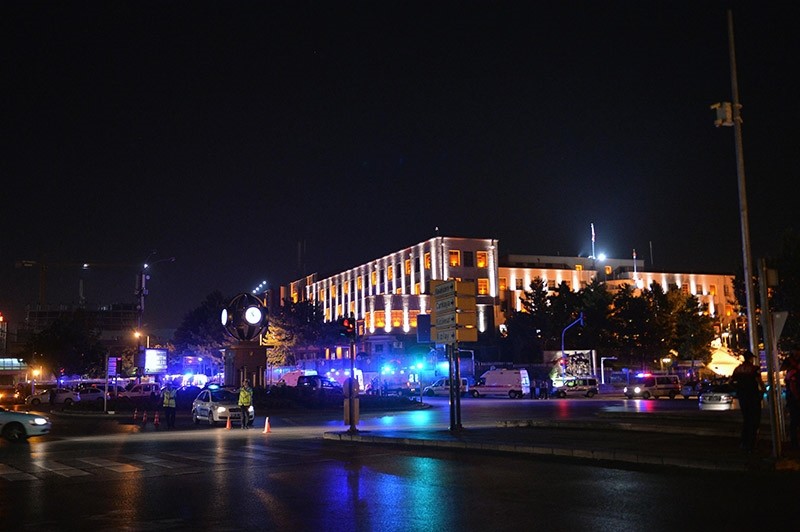 The main indictment on the July 15, 2016 coup attempt has been wrapped up. Prosecutors have asked for multiple life sentences for 221 defendants and say FETÖ leader Fetullah Gülen planned the coup and Akın Öztürk, a former air force commander, led the Peace at Home Council that executed the putsch bid

One of the most anticipated trials in recent years is to start as prosecutors finally concluded the investigation into the July 15 coup attempt blamed on the Gülenist Terror Group (FETÖ). Fetullah Gülen, the U.S.-based leader of the terrorist group, is the prime suspect in the main indictment announced by prosecutors on Friday, while Akın Öztürk, former commander of the Turkish Air Force and a member of the powerful Supreme Military Council, is accused of heading the Peace at Home Council of the putschists. The Ankara Chief Prosecutor's Office is asking for multiple life sentences for Gülen and Öztürk, who are among 221 defendants, most of whom are high-ranking military officers.

A 2,581-page indictment was sent to a court in the capital and the court is expected to set a date for the trial of the defendants, most of whom are in prison. Gülen remains in the United States, where he settled in 1999. Thirty-seven members of the coup council and Gülen face a record 2,988 possible life sentences for the coup attempt that killed at least 248 people.

The indictment also offers a clear insight into the team behind the coup attempt as questions still linger about the coup night despite a flurry of media reports that, more or less, portrayed the putsch as the work of a group of disgruntled officers who joined a FETÖ-linked junta to topple the government. It also says the starting hour for the coup was earlier than coup plotters planned as the putschists, in panic, thought their plot was uncovered by the intelligence branch.

Along with Öztürk, the so-called Peace at Home Council consisted of generals Ahmet Bican Kırker, Ali Kalyoncu, Ali Osman Gürcan, Erhan Caha, Mehmet Partigöç, İlhan Talu, Mehmet Dişli, Gökhan Şahin Sönmezateş, Semih Terzi and officers at the ranks of colonel and lieutenant colonel. Former colonel Ali Yazıcı, who was military aide to President Recep Tayyip Erdoğan, is among 38 members of the council, and most in the council were officers working in the Land Forces and the Office of the Chief of General Staff. The rest were commanders in strategic military bases and personally oversaw efforts to seize power in Ankara, Istanbul and other cities. Fifteen suspects in the indictment remain at large, while general Semih Terzi, a member of the council, was killed as he tried to seize a military base in Ankara during the coup attempt. Of 221 suspects, 199 remain in detention while eight were released pending trial. Apart from the Peace at Home Council members – all military officers – 12 defendants are civilians. Adil Öksüz, who is believed to be Gülen's point man who masterminded the coup upon the latter's instructions, is also included in the indictment. Öksüz allegedly held meetings regarding the execution of the coup with generals prior to July 15. Prosecutors say Öksüz, a theology lecturer by profession, will be tried in a separate case related to the coup. Öksüz was released after his detention at a military base used as a command center by coup plotters on July 15, and remains at large while an investigation is under way against the judges who ordered his release.

The indictment also reveals figures regarding the coup attempt, which was quelled thanks to strong public resistance. Upon the calls of their elected leaders, people took to the streets unarmed to confront the pro-coup troops, and dozens were killed when troops opened fire on crowds even though they had to surrender later to police and anti-coup troops after increasing public pressure. It says the coup attempt was "the biggest terror attack and invasion attempt to date" and "more than 8,000 terrorists wearing military uniform" joined the coup where 35 warplanes, 37 helicopters, 74 tanks, 246 armored vehicles and nearly 4,000 guns were employed by putschists." Prosecutors put the death toll at 250 as the result of the actions of coup plotters, and the death toll includes 183 civilians, four soldiers and 63 police officers. Another 2,735 people including 23 military officers and 154 police officers were injured during the coup attempt.

In a written statement to the media, prosecutors drafting the indictment said Gülen became the prime suspect in the case as he "ordered the coup."

Among the plaintiffs in the case are President Erdoğan, who managed to dodge assassins on the coup night and rallied the public to stand against the putschists. Others include Hulusi Akar, the Chief of General Staff who was held hostage by coup plotters who stormed his office, as well as commanders of the Land, Gendarmerie and other main forces of Turkish army who had been held by pro-coup troops.

The written statement by the prosecutors say defendants are charged with "violating the Constitution," an "attempt to remove Parliament and the government," "running a criminal gang," "murder," "attempted murder" and "kidnapping."

It says the coup plotters first started drafting plans for a putsch in December 2015 and putschists from every branch of the Turkish Armed Forces participated in a string of secret meetings on how to execute the coup.

The indictment says coup plotters originally planned to start the putsch around 3 a.m. on July 16 but they started it earlier – in the evening hours of July 15 – as they believed their plan was "uncovered." The coup plot was also scheduled for a later date but a crackdown on FETÖ and an August meeting of the Supreme Military Council, where FETÖ-linked officers were expected to be dismissed from the army, forced to coup plotters to change the plans.

In their initial testimony, most generals linked to the coup attempt had denied that they were involved in the attempt and claimed they were trying "to convince pro-coup troops to stop it." Öztürk for his part has claimed he was at Akıncı air base – where coup plotters held anti-coup troops hostage – to stay in the officers' lodgings there and "to see his grandchildren" staying there. Gülen also denies his involvement in the coup attempt although prosecutors say evidence is mounting against the FETÖ leader, with the connections of senior pro-coup officers to Gülenists. Gülen refuses to return to Turkey while Ankara seeks his extradition from Washington. The FETÖ leader currently lives in a retreat owned by FETÖ in Pennsylvania.

Trials over the coup attempt have started last December. Hundreds of military officers are indicted in the cases involving the takeover of military bases, attack on strategic locations such as Parliament and the presidential palace, although the main trials of high-ranking officials are yet to start and most defendants are low-ranking officers who claim they simply followed the orders when they joined the coup. Most defendants claim they are not linked to FETÖ despite the evidence, such as an encrypted messaging app exclusive to the terror cult, was found in their possession.

One such trial was in southwestern city of Muğla on Friday. A total of 47 defendants accused of attempt to kill President Erdoğan while he was staying at a hotel in the city, were brought back to the court for the latest hearing in their weeklong trial. Capt. Ali Aktürk, who was the pilot of the helicopter sent to rescue would-be assassins of Erdoğan when they were confronted by police officers guarding Erdoğan's hotel, testified at the hearing. Aktürk claimed he did not know a coup was happening when he was summoned to Muğla for "an urgent mission." He said he first received a team of pro-coup troops and he was not told what the "purpose of the mission" when he asked about it. He said he and other pilots sent to Muğla were only told that they were tasked with "transportation of military personnel." Aktürk said he did not question it further and learned about the coup only after he and others were arrested upon returning to the military base in the western city of İzmir where he and the team of assassins left for Muğla.

FETÖ began to wage a campaign against the government a few years ago. Thanks to the terror group's infiltrators in the police, judiciary, bureaucracy and the military, FETÖ orchestrated sham trials to implicate senior figures on forged evidence and ultimately moved to seize power by employing officers loyal to them in the coup attempt.

In the aftermath of the coup attempt, FETÖ now faces a new wave of trials. A total of 1,235 lawsuits have been filed against the terror group since the attempted putsch. Out of those, 78 of the lawsuits are directly related to the coup.

The coup trials alone have 1,986 defendants, with 1,232 of them currently being held in custody in 21 provinces. The first trials started last year in two provinces, Denizli and Erzurum, and more have followed since in Istanbul and the capital Ankara.