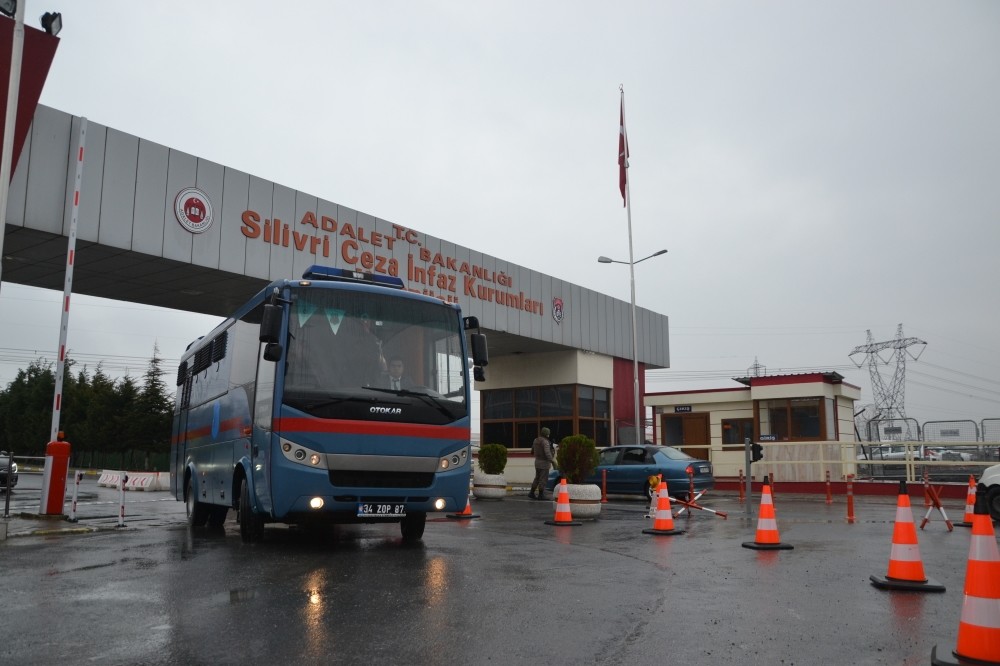 A prison van exits the Silivri prison complex where coup plotters in Istanbul are jailed and being tried.
by Compiled from Wire Services Mar 14, 2017 12:00 am

Yet another week of coup trials started yesterday. In the first hearing of the attempted takeover of the Istanbul governorate during the July 15 putsch bid linked to FETÖ, the colonel who led the pro-coup forces claimed he was sent there for ‘security against a terror threat,' a common defense among pro-coup soldiers

"I thought it was an anti-terror drill," "we were ordered to maintain security against a terror threat." These were the most common sentences heard in defense testimonies of officers accused of carrying out the July 15 coup attempt that killed 248 people. Nizamettin Aydın, the colonel who led his unit to the Istanbul governorate that night with the purpose of capturing the strategic location, cited the same excuse while pleading not guilty to coup charges in a trial yesterday in Istanbul.

Aydın is among the 12 defendants jailed on coup charges who face life sentences for the brutal attempt to seize power blamed on the Gülenist Terror Group (FETÖ). The defendants, including an additional 78 other ones, who were released pending trial or at large, are also accused of membership of a terrorist group. Ironically, Aydın says he was at the governorate upon orders of the higher command to quell a possible terror threat.

He told the court, which is situated right across from the sprawling Silivri prison complex where he is jailed, that a fellow colonel gave him blueprints of the governorate and the order of the Third Army Corps on July 15. "I did not question the order," Aydın told the court while admitting that he could only obey a direct order to his military unit. "I believed Sadık Cebeci about a possible terror attack and never suspected when I saw the military preparations in the base,"he added, referring to the colonel who told him about the "terror attack."

"I am a well-disciplined soldier and carry out any order I am given," Aydın added. He claimed he and his soldiers were at the governorate simply to maintain security.

He also claimed he ordered his soldiers to retreat when he saw a crowd gathered to confront the pro-coup soldiers outside the governorate. "Some people among the crowd tried to provoke us but I did not order my unit to fire upon the crowd," Aydın told the court.

Prosecutors say Aydın and other officers were tasked with capturing the governorate upon the orders of junta members at an Istanbul-based military school. They ask for three instances of life imprisonment for the defendants. The indictment in the case says Cebeci, who commands a tank unit, told his subordinates and fellow officers of "an imminent Daesh attack" and ordered them to prepare to provide security.

In another courtroom at the same courthouse in Silivri, 75 defendants, mostly cadets from the Air Force Military Academy, appeared in their first hearing on coup charges. The defendants claimed they were "tricked into" joining the coup attempt. Ahmet Adar, a cadet tried on coup charges, said he and the others were ordered to board buses for "a drill" and discovered that they were heading to Istanbul from the city of Yalova where they were in a bootcamp when they saw the bridge where coup troops opened fire on civilians on the night of the coup. Acar said he and the others were not aware of a coup attempt unfolding as they could not communicate to anyone "because our superiors took away our cellphones."

In the coup trials that started last year, hundreds of military officers as well as a number of civilians are accused of attempting to overthrow the elected government in a plot orchestrated by FETÖ.

FETÖ, led by U.S.-based former preacher Fetullah Gülen, sought to topple the government and seize power, ahead of a critical meeting of the country's leaders and top generals who were expected to dismiss FETÖ-linked officers from the army, according to statements of former FETÖ members.

Most coup trials underway are confined to low-ranking military officers who played a role in the putsch bid while the Peace At Home Council, the FETÖ-linked junta behind the coup attempt, has yet to appear before a court.
RELATED TOPICS