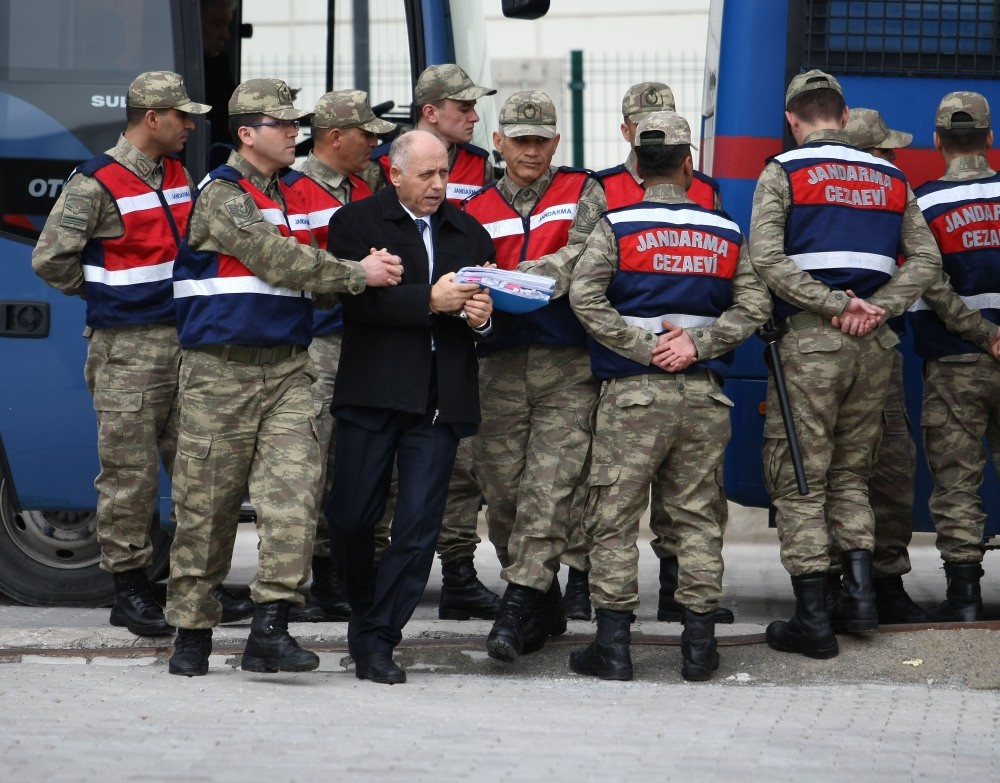 Avni Angun, a pro-coup general, was escorted to the courthouse for Tuesday's hearing into the coup attempt in the city of Malatya.
by daily sabah Mar 15, 2017 12:00 am

In yesterday's hearings on the July 15 coup attempt: An officer who ordered opening fire on unarmed civilians, blamed the crowd for ‘getting injured,' while conscripts revealed how they were ordered by their superiors to fire at anyone opposing the putsch bid

A pro-coup military officer, who was commanding troops who seized a CCTV surveillance center on July 15, and conscripts ordered to fire on the public were the latest to speak up at yesterday's hearings across Turkey on the coup attempt blamed on the Gülenist Terror Group (FETÖ).

Lt. Col. Mustafa Kubilay, who fired on unarmed civilians gathered outside the Disaster Coordination Center (AKOM) in Istanbul during the putsch bid, admitted he fired on the crowd to stave them off but insisted it was to "deter them facing off with his soldiers," conscripts "who might have killed them." Kubilay, for his part, injured several people converged there when he randomly fired upon the crowd who were outside AKOM after calls from the country's leaders to take to the streets to confront the coup plotters. AKOM, which houses thousands of security cameras across the city, was a critical location for coup troops who also tried to seize the headquarters of telecom companies, TV stations and other places across Istanbul.

The officer was among the six jailed defendants for the attempt to seize AKOM on July 15 and faces life imprisonment. In a courtroom packed with plaintiffs, mostly those injured when he and other soldiers fired upon them, he said he went there on the orders of Colonel Müslüm Kaya. Like other defendants in coup trials who tried to dodge blame, he said he was simply following orders and they were stationed there against "a terror threat." Kubilay said he saw a crowd approaching the building after midnight and fired warning shots to disperse them. "They were angry and swearing at soldiers. If I let them in, they would face the conscripts and they would most probably have been killed," he told the court as the plaintiffs shouted, "he is lying." He said they wouldn't be injured if they did not resist the soldiers.

Dismissing his claim that he went to AKOM after a terror threat, the judges said he should have questioned "the legitimacy of the order." "In the case of a terror attack, the police are designated as a first responder. Did it occur to you that the order to intervene in a terror case might not be legitimate?" the chief judge asked Kubilay. Kubilay said he was trained not to question orders.

Kubilay and others are accused by the prosecutors of cutting off video feeds to security forces via AKOM. Apart from life imprisonment for the coup attempt, they also face prison terms for attempted murder for injuring seven unarmed civilians as well as membership of a terrorist group in reference to FETÖ.

İsmail Erol, a conscript who testified at the hearing, said his unit was under the command of "a lieutenant colonel" he had not seen before and military officers prevented them from surrendering after they realized they were involved in a coup attempt. Erol said he saw military officers at AKOM burning "some papers" they were holding after they decided to turn themselves in.

Conscripts, who were forced to join the coup by their superiors, also took the stand in Malatya, the eastern city where 76 defendants are being tried on coup charges.

Taşkın Y., a conscript who was released pending trial, said he was ordered to fire on anyone approaching the base on July 15 by Maj. İbrahim Dede, an alleged pro-coup officer. "He told me he would shoot me if I don't fire," the defendant told the court. "I was ordered to fire at anyone, be them policemen or gendarmerie troops," Taşkın Y. said in his testimony. He said he fired a few shots into air and managed to escape the spot he was stationed at before pro-coup officers caught him. Halil İbrahim S., another conscript, confirmed his statement and said Maj. Dede ordered them to fire at anyone they saw coming close to the base.
RELATED TOPICS