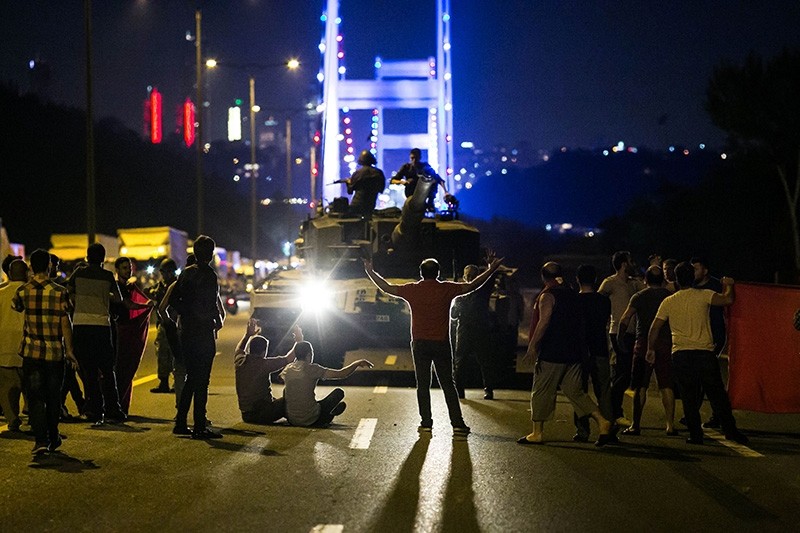 People take over a tank near the Fatih Sultan Mehmet bridge during clashes with military forces in Istanbul on July 16, 2016. (AFP Photo)
by Anadolu Agency Mar 18, 2017 12:00 am

The night of the defeated July 2016 coup, there were more than 8,000 military personnel working for the Gülenist Terror Group (FETÖ), the group behind the coup, said a judicial source Saturday, revealing new details of the night Turkey defeated a would-be putsch against the elected government.

A March 8 indictment in Ankara's 17th Heavy Penal Court also revealed that the night of July 15, 35 planes, 37 helicopters, 246 armored vehicles, and around 4,000 light weapons were used in the failed attempt "to overthrow the democratic constitutional order by treasonous FETÖ members," said the source, who asked not to be named due to restrictions on speaking to the media.

To date prosecutors have submitted charges against 221 defendants as part of the main indictment, including U.S.-based Fetullah Gülen, said to be the central figures behind the bid to overthrow the government, which left 249 people martyred and some 2,200 injured.

Among the suspects are the members of the so-called "Peace at Home Council" established by the coup-plotters to replace the government.

Led by Gülen, FETÖ is accused of orchestrating the coup plot as well as being behind a long-running campaign to overthrow the state through the infiltration of Turkish institutions, particularly the military, police, and the judiciary.