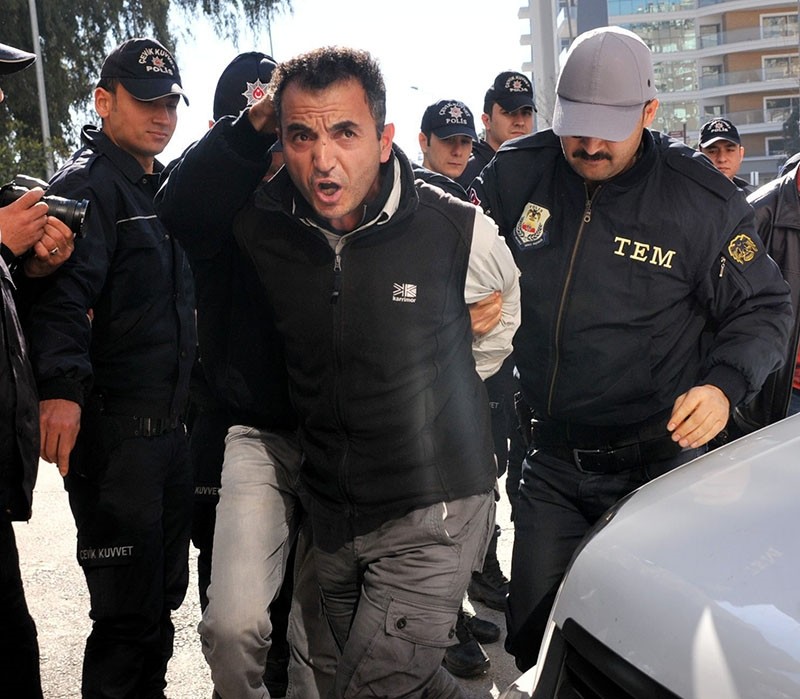 This file photo shows DHKP-C militant Ismail Akkol being brought to police headquarters for testimony following his capture, on Feb. 04, 2016.
by Daily Sabah May 17, 2017 12:00 am

Akkol was the third assailant of the controversial Özdemir Sabancı murder in 1996. He fled Turkey after the murder and was captured in western Turkey in February 2016 along with another DHKP-C militant, fiirearms, explosives and documents.

Along with Mustafa Duyar and Fehriye Erdal, Akkol was one the assailants of the murder of Özdemir Sabancı, who was assassinated on January 9, 1996 in his office in Sabancı Towers in the district of Levent in Istanbul along with Haluk Görgün, the general manager of ToyotaSA, and secretary Nilgün Hasefe. Sabancı was a board member and division head of the family business Sabancı Holding, one of the largest industrial and financial conglomerates in Turkey by profit.

Duyar and Akkol were also assailants of an attack that killed two Turkish gendarmerie officers in Istanbul's Maslak district in 1995.

The trio of DHKP-C militants had all fled abroad after the Sabancı assassination. Duyar had surrendered to the Turkish Embassy in Damascus. He was later killed by the Karagümrük gang in the Afyon E-type closed prison located in western Turkey, reportedly over his intention to speak out over DHKP-C's links with the alleged Ergenekon terror organization, dubbed as Turkey's "Gladio" or "deep state."

Erdal was captured in Belgium in 1999 but was not extradited to Turkey despite numerous efforts. She was acquitted of all charges in 2008, and went missing. Several media reports suggested that she was executed by the terrorist group probably in the Balkans.

Akkol was detained in Greece in 2014 along with four other DHKP-C members, but was released in 2015, despite being sought by Turkey with a red notice.

Greece remains one of the countries in which DHKP-C is very active, and the terror group operates a camp, disguised as a refugee camp, located in the town of Lavrion, 60 kilometers southeast of Athens.

The assailants in the murder case had been in cooperation with Erdal, a DHKP-C militant who was hired as a cleaning lady by the Sabancı Holding in the tower blocks via recommendation from a police chief. Akkol and Duyar had entered the towers and management offices, one of Turkey's finest protected at the time, with help from Erdal.