Defendants blame the dead and fugitives for putsch bid 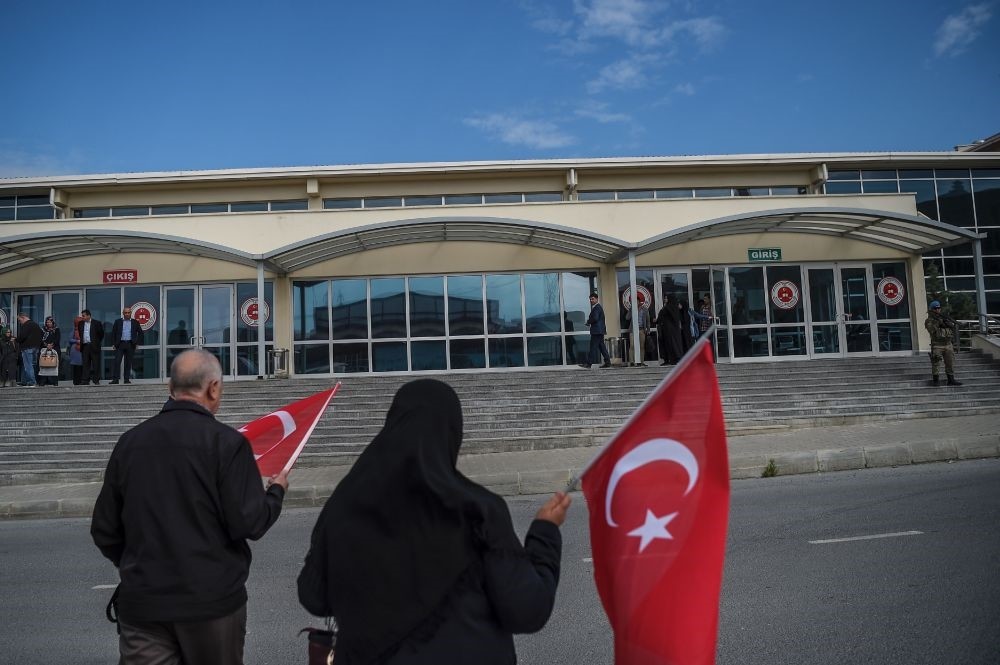 Relatives of coup victims hold Turkish flags as they wait outside the courthouse where putsch suspects are being tried in Istanbul.
by Compiled from Wire Services Jun 01, 2017 12:00 am

The main trials in the July 15 coup attempt, blamed on FETÖ, are underway in Istanbul and Ankara. Most defendants accuse either slain putschists or those who fled after the coup was foiled, to the chagrin of critics who claim they are putting on a show to prolong the trials

It is the second week of a major coup trial in capital Ankara, and yesterday marked the third hearing in another main trial on the putsch bid in Istanbul. With the number of defendants yet to take the stand fast decreasing, so far, not a single person has pleaded guilty to charges of conducting last year's coup attempt that left 250 people dead. Defendants have been following a common pattern of either accusing the dead or pointing the finger at fugitive putschists as the real figures behind the coup attempt. This has angered trial observers who claim a majority of the defendants are seeking to prolong the trials by denying wrongdoing despite evidence clearly showing their involvement in the takeover bid blamed on the Gülenist Terror Group (FETÖ).

In Wednesday's hearing concerning the coup attempt in Istanbul, Erdal Öztürk, commander of Third Army Corps, who was arrested after the attempt was foiled, testified and claimed he was not involved in the bid to take over strategic locations in Istanbul. Öztürk, who was among 24 military officers arrested after July 15, said he was not aware of the attempt and was outside the city when it happened. Öztürk's name was on a list prepared by coup plotters to replace anti-coup generals. He rejected it and said his name was deliberately included on the list. The former general blamed Col. Uzay Şahin, an Istanbul-based officer who ordered that civilians resisting the coup attempt be fired upon, which angered a prosecutor. "You did what others did in trials in Ankara. You accuse those on the run," acting chief prosecutor Fatih Karakuş told Öztürk. Şahin's name was in a WhatsApp group set up by putschists on July 15 to coordinate efforts to seize power. Correspondence discovered by investigators show that Şahin was influential in the putschists' plans to seize Istanbul.

In the trial in Ankara in which 221 defendants, including top generals accused of holding Chief of General Staff Hulusi Akar hostage, are being tried, a colonel who let the putschists into main army headquarters testified yesterday. Col. Doğan Öztürk was the officer seen in security camera footage opening the gate of the Office of Chief of General Staff building to an elite military unit loyal to putschists. The unit stormed Akar's office and took him at gunpoint to Akıncı military base in Ankara where the putschists commanded the nationwide coup attempt and airstrikes in the capital on July 15. Öztürk claimed he was not aware of the coup bid and allowed Akar's captors as he was told by his superiors that the captors were actually dispatched from another base "to guard Akar against possible a terror attack risk." He claimed he did not see putschists holding anti-coup officers hostage inside the headquarters.

So far, no defendants in the Ankara trial have admitted their role in the coup attempt, and to the contrary, they have claimed they fought coup plotters. Only a few defendants remain among the generals to present their defense. According to prosecutors, the putsch bid was the work of the 38-member Peace At Home Council, consisting of FETÖ's infiltrators in the army. One member of the council was killed during the coup bid, while another member admitted he consciously joined the planned coup though he denied links to the terrorist group. Akın Öztürk, who is accused of commanding the coup, denied allegations.

Fetullah Gülen, the leader of FETÖ who currently lives in the United States, denies the charges in coup trials in which he is accused of plotting the putsch. He and other defendants face multiple life sentences. Adil Öksüz, a Gülen aide who is accused of planning the takeover with FETÖ's infiltrators in the army, remains at large.

Minister of Family and Social Policies Fatma Betül Sayan Kaya was among those watching the trial in Istanbul. Kaya, whose ministry handles social aid and psychiatric counsel for victims of the coup attempt, said defendants were engaged "in a farce." "But I am assured that Turkish justice will hand out the punishment they deserve to them. Let families of martyrs rest assured that we will be with them," Kaya told reporters outside the courtroom inside a massive prison complex in the city's Silivri district where putschists are also jailed. "They pretend they are not the ones who dropped bombs on Parliament, the presidential complex or police headquarters in Ankara," Kaya lamented. The minister said her ministry had appointed lawyers to the trial to help victims and also provided shuttle buses for plaintiffs.

Erol Bulut, who was injured when putschists trying to take over Istanbul city hall opened fire on an unarmed crowd resisting them, said they ask for "capital punishment" for the suspects. Speaking to reporters outside the Silivri courtroom, he said death sentences might deter future coups. "We witnessed coups in almost every decade. It may not be possible to sentence those behind the July 15 to death, but capital punishment should be applied in any future case," he said.

Metin Külünk, a lawmaker from the ruling Justice and Development Party (AK Party) who led the crowd confronting putschists outside the party's Istanbul headquarters on July 15, said trials gave defendants a chance to dodge the blame. "As far as we can see, they try to water down the trials, to shift blame and occasionally, they insult the families of victims," he said. Külünk said Turkey's fight against FETÖ was not over yet, adding that operations before and after the coup only revealed the "tip of iceberg." "Don't expect a complete removal of a group infiltrated in the state for decades swiftly. Besides, the real danger is the employment of FETÖ's ideology as a weapon of world powers against Turkey," Külünk said.