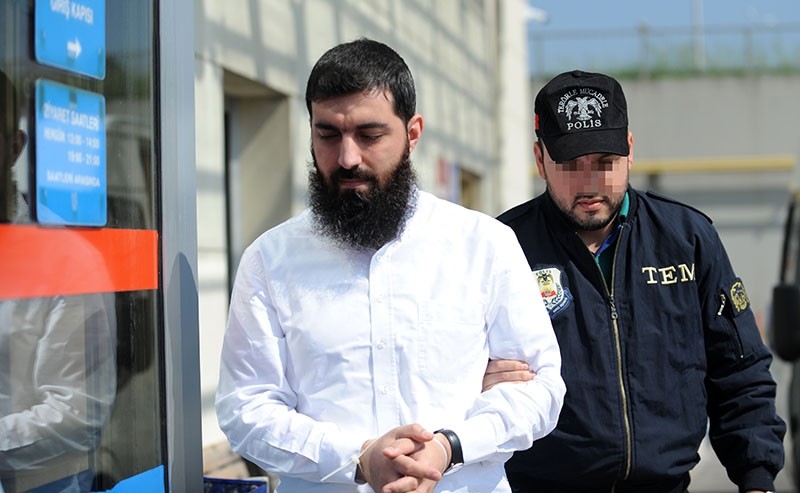 Suspected Daesh leader Halis Bayancuk appeared in an Istanbul court Wednesday, after having been arrested May 30 and interrogated by police in the northwestern Turkish province of Sakarya.

Also known by his codename "Ebu Hanzala," Bayancuk is alleged to be one of the high-ranking Daesh coordinators in Turkey.

Bayancuk was arrested along with seven others within the scope of an investigation headed by the Sakarya Chief Public Prosecutor's Office. Bayancuk was then questioned by police in the province on May 31 before being sent to Istanbul to appear in court.

Bayancuk is suspected of recruiting members for the Daesh terror organization, and is also facing charges for establishing a secret prayer hall in Sakarya for meetings, and transporting Daesh members to Istanbul. A second suspect known as M.Y. was also transferred to court along with Bayancuk.

Turkish police have arrested Bayancuk several times before, including in 2011 and 2014 during raids on al-Qaida cells in Turkey. In 2015 he was among a number of detainees held across Turkey in a nationwide anti-terror operation. Police have also detained his wife and seized digital material and documents from his home in Istanbul's Bağcılar district.

He was jailed pending trial on charges of "leading or being a member of a terrorist organization."

In a hearing in February 2016, Bayancuk rejected links with any terrorist organization and he was released in March under judicial control along with dozens of other suspects.

The suspect was also arrested in 2014 and 2011, as police raided al-Qaida cells in Istanbul. He had been suspected of being al-Qaida's alleged leader in Turkey.

Daesh has claimed responsibility for a string of deadly attacks in Turkey, and the country has detained over 5,000 Daesh suspects, deported over 3,290 foreign terrorist fighters from 95 countries, and refused entry to more than 38,269 individuals as part of anti-terror initiatives.

Meanwhile, Turkey launched Operation Euphrates Shield in 2016 to back Syrian opposition groups fighting Daesh in northern Syria, close to the border with Turkey. The operation saw the liberation of Jarablus, Dabiq and al-Bab from Daesh forces.