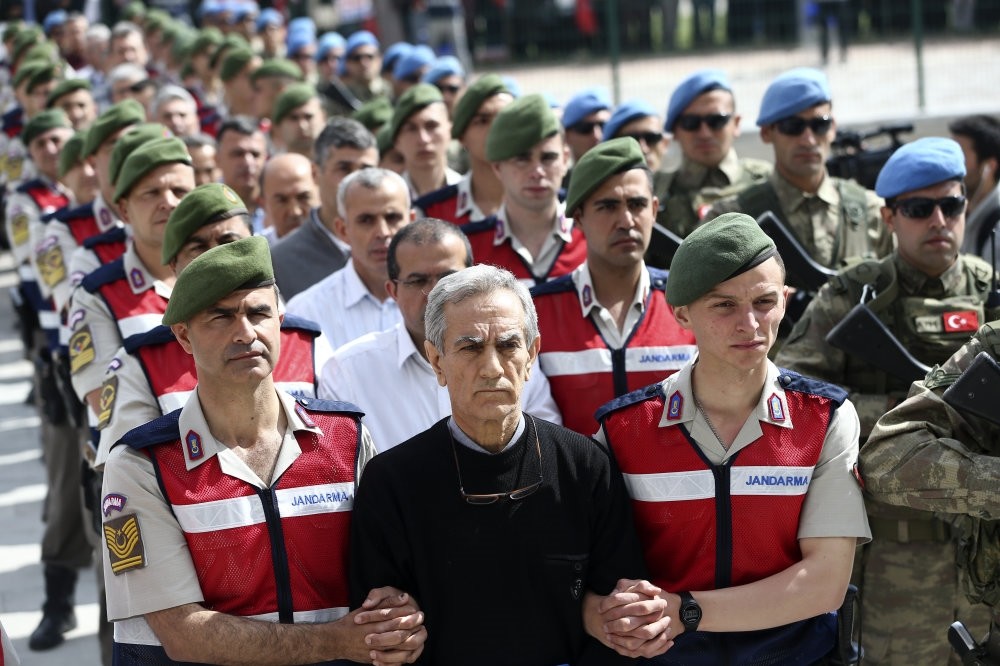 Gendarmerie officers escort generals accused of involvement in last year's coup attempt, to a courtroom in Ankara.
by Anadolu Agency Jun 07, 2017 12:00 am

In yesterday's court hearing on the July 15 coup attempt blamed on FETÖ, a former top aide to top Gen. Hulusi Akar claimed he did not place several phone calls to the Pentagon or Belgium despite evidence he was in touch with several people abroad during the coup attempt as he and others made their move to kidnap Akar

Gözel is accused of aiding the abduction of the army chief, Gen. Akar, during the coup. Evidence shows that the disgraced colonel made multiple phone calls to someone in the Pentagon, to a Belgian phone number and others while pro-coup troops were taking over the army headquarters, located at the Akıncı air base, where he was stationed.

Like other defendants who testified before him, Gözel denied all the allegations despite the mounting evidence, from phone records and security camera footage to testimonies of eyewitnesses showing him and other defendants actively carrying out the putsch by taking out anti-coup troops.

Gözel is among 221 defendants on trial, most of whom were arrested following the coup attempt, including members of the so-called "Peace At Home Council" composed of Gülenist junta members.

The former colonel, who was one of the closest figures to the Gen. Hulusi Akar before joining the coup bid, was seemingly on the phone most of the time during the coup bid as phone records show. Still, Gözel denied phone calls to and from the U.S., Belgium (presumably to NATO headquarters), as well as the British embassy in Ankara. He claimed "someone else might have used his cellphone," though he admitted phone calls to and from domestic numbers around the same time as the calls abroad.

Gözel accompanied others into Gen. Akar's office after an elite military unit of putschists stormed the army headquarters to take anti-coup officers, including Gen. Akar, hostage and move them to a military base commanded by putschists. Gözel denied he was in the room at that time and claimed he found it normal that elite military team was at the headquarters.

Meanwhile, Gözel is also accused of ordering the capture of Gen. Salih Zeki Çolak, the commander of the Land Forces, as he arrived at the army headquarters to meet with Gen. Akar. He denied the allegation even though he was caught on security camera standing next to soldiers who were handcuffing Gen. Çolak.

Gözel's defense, in which he sought to shift the blame to others for the coup attempt, bears similarities to that of others involved in the putsch bid. It is a common strategy, according to lawyers who say the defendants are seeking to prolong the trials in hopes that another coup will liberate them. His defense, however, was quickly shot down by lawyers.

Hüseyin Aydın, President Recep Tayyip Erdoğan's lawyer who was targeted by putschists during the coup bid, questioned how Gözel stood idle as an army captain was shot before his eyes.

Aydın was referring to the captain, who was serving as a guard to the Land Forces commander Gen. Çolak, when he was shot by putschists as he tried to prevent the abduction of Gen. Çolak. Gözel had accompanied the putschists during that incident and apparently left the scene shortly thereafter.

Regarding his shady phone calls, Gözel said he did not "remember" some of the numbers and claimed he did not make calls to some of the other numbers. He said he only talked to officials from the opposition parties who phoned the army headquarters to find out what was happening.

Peculiar phone calls by pro-coup figures have already fueled conspiracy theories that putschists received support from abroad. In March, it was revealed that Adil Öksüz, the alleged mastermind of the coup attempt on behalf of FETÖ leader Fetullah Gülen, received a phone call from the U.S. Consulate in Istanbul hours after he was controversially released after he was caught and arrested at the Akıncı air base where the army chief, Gen. Akar, was held hostage by putschists.

The U.S. embassy said it was a standard procedure to make phone calls to people whose visa applications were rejected and that was the reason the consulate staff called Öksüz.

Investigators say that Öksüz, a theology lecturer strongly linked to FETÖ, planned the putsch bid through meetings. Öksüz was a frequent traveler to the U.S., where he would meet with Fetullah Gülen regularly, according to the investigators, but his visa to the U.S. was suddenly scrapped after the putsch bid.