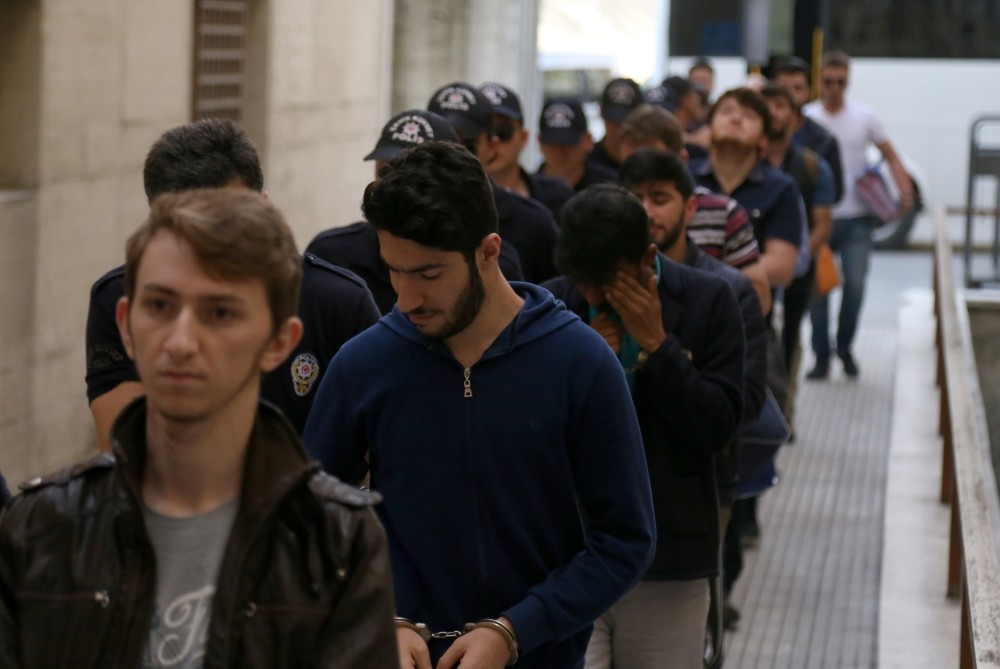 Figures reported by the Turkish media show more than 50,000 people were arrested for links to FETÖ after the July 15 coup bid last year and more than 55,000 suspects were released pending trial, as the government expands its crackdown on the terrorist group

In the eleven months since a failed coup bid killed 250 people and injured hundreds, Turkey has netted more than 150,000 suspects linked to the Gülenist Terror Group (FETÖ), which is blamed for the bloody attempt.

The state-run Anadolu Agency and Sabah newspaper reported that 50,344 people have been arrested, while 55,495 people have been released pending trial, as authorities escalated the crackdown on the group in the wake of the putsch bid. Figures show a total of 161,751 suspects were subject to investigation and 3,334 suspects benefited from non-prosecution.

FETÖ, headed by Fetullah Gülen a former preacher based in the U.S., is accused of masterminding and executing the coup to seize power. Through its infiltrators in the army, who were aided by civilian FETÖ members, the group schemed to topple the government and kill President Recep Tayyip Erdoğan, prosecutors say. Following the coup bid, authorities announced a state of emergency, which will likely remain in place throughout at least this year. The state of emergency facilitated the crackdown against the terrorist group, which dodged authorities for four years after it first tried its hand in seizing power in 2013. The latest coup attempt, in fact, was an attempt to prevent an expected, broader crackdown on the group to weed out its infiltrators in the army.

When the professions of the suspects are broken down, a majority of the arrested FETÖ suspects were police officers. Some 8,849 police officers were arrested since July 15, 2016. The terrorist group, which initially started out as a charity movement, helped its followers join law enforcement en masse for years and also recruited police officers to its ultimate cause, that is, to seize power in the country.

After police officers, 7,143 military officers make up the majority of the arrested. Prosecutors say military officers who were expected to be dismissed in August 2016 in a routine meeting to reshuffle the military ranks, were behind the coup bid.

The arrested include 24 provincial governors, 73 deputy governors and 115 district governors. A total of 8,359 people who were jailed for FETÖ links were later acquitted. Among those released pending trial are members of the country's Supreme Court of Appeals, 1,456 prosecutors and judges, 4,230 military and 6,272 police officers, 11 governors and 43,399 civilians, including public sector employees.

Authorities have issued detention warrants for 7,605 suspects since the coup attempt and these include 218 judges and prosecutors, 147 military and 386 police officers, while the rest are bureaucrats, civil servants and civilians. According to a government decision, officially published last week, Turkey will revoke the citizenship of 130 individuals if they do not return to Turkey to face trial within three months.

The Interior Ministry's list also included Fetullah Gülen who has lived in Pennsylvania, in a luxurious retreat, since 1999. Turkey has been actively seeking his extradition from the U.S. since the coup attempt unfolded last year. Gülen faces multiple life sentences in trials relating to the coup and on other charges regarding his leadership of a terrorist group. Those charges range from illegal wiretapping by FETÖ-linked police officers to money laundering, blackmail, fabricating evidence in sham trials and similar charges.