Suspects cover their ears to mention of FETÖ in trial 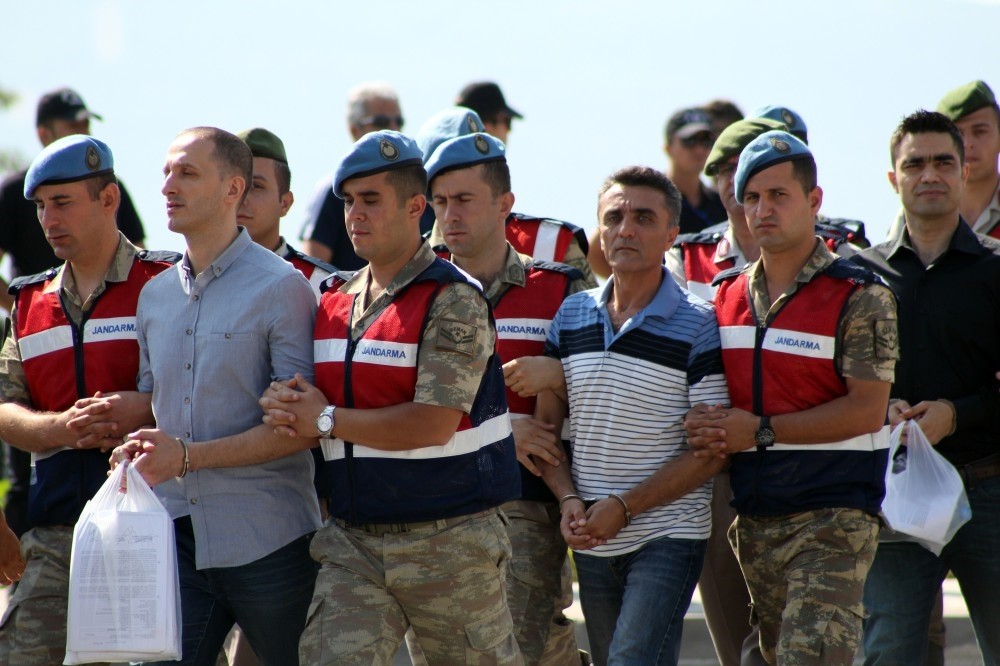 Gendarmerie troops escort defendants to court.
by Compiled from Wire Services Jul 21, 2017 12:00 am

In the latest bizarre instance regarding the Gülenist Terror Group (FETÖ) connection denials, pro-coup soldiers tried for the assassination attempt against President Recep Tayyip Erdoğan covered their ears in the courtroom yesterday at every mention of FETÖ.

Forty-seven defendants are being tried for an attempted raid at the hotel where Erdoğan was staying during the July 15 coup bid in 2016 that killed 250 people. The suspects, members of an elite military unit, are accused of being members of FETÖ and prosecutors have presented evidence of their ties to the group in the trial, from text messages to correspondence and attendance of a meeting of generals with Adil Öksüz, a fugitive "civilian" FETÖ member who allegedly orchestrated the putsch bid.

Hüseyin Aydın, the lawyer of plaintiff President Erdoğan, presented his plea to the court for the sentencing of the defendants in yesterday's trial in the southwestern city of Muğla where Erdoğan was staying at during the coup bid. Whenever he spoke critically of Fetullah Gülen and the terrorist group, the defendants put their hands on their ears in an awkward display of their refusal of the group's involvement in the putsch attempt.

In earlier trials, the defendants had staunchly denied links to FETÖ and most claimed they thought they were dispatched to Erdoğan's hotel "to catch a terror suspect."

The coup trials in Turkey started last year and hundreds of officers, from lieutenants to generals, are being tried for the putsch bid. So far, only a few defendants have acknowledged their links to FETÖ despite abundant evidence showing their meetings with the group's members.

Most of the defendants have also avoided naming FETÖ as being behind the coup. The plaintiffs' lawyers say this is a defense strategy to vindicate the terrorist group, hoping that FETÖ will "liberate" them from prison.

FETÖ's leader Fetullah Gülen, who currently resides in Pennsylvania, is the prime suspect in the coup cases and faces life imprisonment. However, Gülen has abstained from attending the trials and Turkey has been actively seeking his extradition from the U.S.

Speaking to İhlas News Agency, Erdoğan's lawyer Hüseyin Aydın said it was the first time that the lawyers for the plaintiffs had the opportunity to speak freely after the months-long trials that mostly focused on the defense of the defendants and questioning. "The defendants in lower military ranks claim they were simply following orders but we object to this. They were following illegitimate orders and obeying an order constituting to a crime is illegal," Aydın said, noting that the events that unfolded at the hotel, the raid and shooting of police officers were not a military operation but "an operation by FETÖ." Aydın said the defendants' efforts to vindicate FETÖ for their involvement in the coup has something to do with the extradition of the group's leader Fetullah Gülen from the United States. "The U.S. may view the extradition request for Gülen as a political matter but they cannot reject his extradition if he is associated with an attempt on the life of Turkey's president under the extradition treaty [between Turkey and the U.S.]. We believe this is why the defendants try to distance Gülen from the assassination bid," Aydın said.