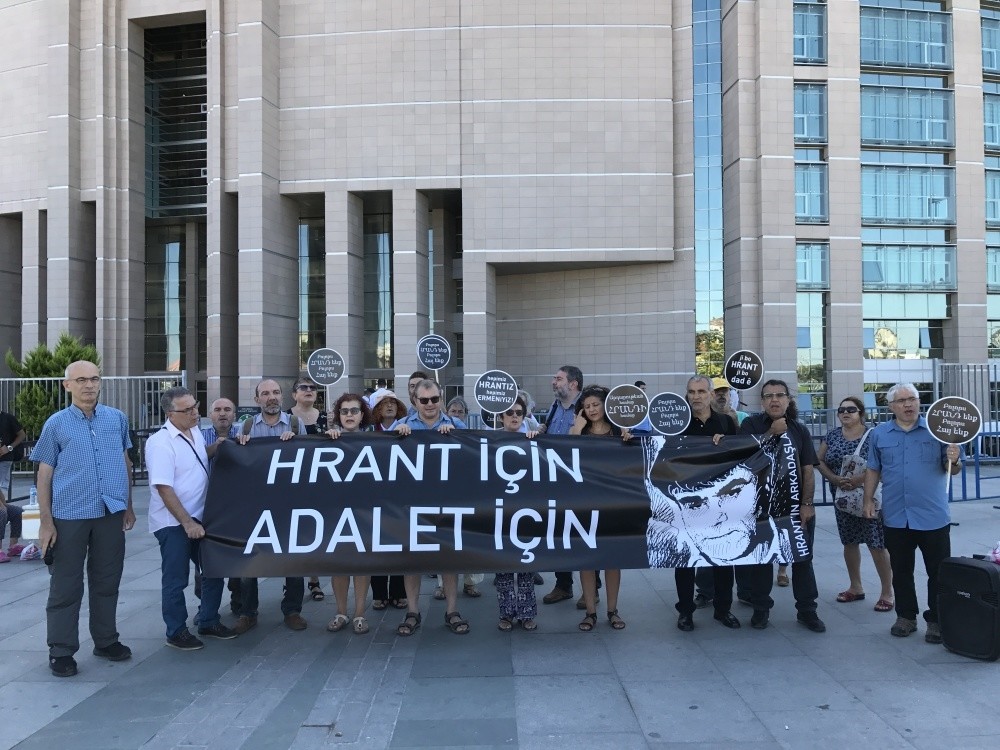 The latest hearing in the murder trial surrounding notable Turkish-Armenian journalist Hrant Dink began yesterday in Istanbul where defendants testified against the accused murderer in the case, portraying him as a nationalist hero in the case that has been linked to a FETÖ plot

Ten years after Hrant Dink was shot dead outside the Agos building where he served as editor-in-chief, family and friends of the slain journalist may be closer to getting justice in the case. The first hearing in a new trial centered around his murder and a possible cover up in the aftermath of the murder began Monday in an Istanbul courtrooom. Dink's accused murderer as well as public officials appeared before the court while fugitive senior figures from the Gülenist Terror Group (FETÖ), which sought to use the murder to incite tensions across the country, abstained from the hearing.

A defendant told the court how a teenager named Ogün Samast, who was caught in northern Istanbul shortly after the murder, was transformed into a national hero following the release of controversial images where he was seen posing with a Turkish flag surrounded by security officers.

Eighty-five defendants are being tried in the case including 10 who remain at large and 25 defendants who have been jailed pending trial. FETÖ leader Fetullah Gülen, FETÖ-linked fugitive prosecutor Zekeriya Öz and former police chiefs linked to the terrorist group are among the defendants. Former Police Chief Ramazan Akyürek, who is accused of covering up intelligence tip-offs about the murder, was among those who attended the hearing yesterday.

Birol Ustaoğlu, who worked as an intelligence officer at gendarmerie headquarters in the province of Samsun where Samast was captured, was the first to present his defense. Ustaoğlu is among the officers who posed with a triumphant Samast in the gendarmerie station while the latter was seen holding a Turkish flag. The images caused outrage in the country for glorifying the murder of a senior Armenian figure. Samast said after the murder that he killed Dink because of his anti-Turkish views. Hrant Dink, 53, was an outspoken journalist who advocated for the reconciliation of Turks and Armenians who have strained relations over the ongoing "genocide" dispute. His murder, initially blamed on ultra-nationalism, was later found out to have a far more nefarious motive: FETÖ tried to use the murder to fuel ethnic tensions in the country, as prosecutors and judges who handled the case earlier were discovered to have links to the terror cult.

Ustaoğlu told the court that it was Samast himself who suggested holding a Turkish flag when he was interviewed by interrogators who filmed the interview. He claimed that the chief prosecutor approved the filming of the interview with a Turkish flag, saying that he did not know that the images would be "leaked" to the media. He said they bowed to the demand of Samast to "extract information from the suspect more quickly."

Prior to the hearing, a group of activists who call themselves "Friends of Hrant" made a statement to the press and vowed to monitor the trial "until everyone involved in the murder is punished."

The first trial in the murder was concluded in 2012 when only 19 defendants were tried. At the time, an Istanbul court ruled in favor of prison sentences for Samast and his friends, including a police informant. A higher court had thrown out the terror charges for the suspects, saying Samast and the others were merely members of a criminal gang. A new investigation years later turned the spotlight to the role of police chiefs and intelligence officials accused of covering up intelligence reports on the murder plot and evidence of possible negligence by prosecutors and judges handling the murder case, as it was determined that the prosecutors and judges were linked to FETÖ. The terrorist group is blamed for last year's July 15 coup attempt which it plotted via its infiltrators in the army and the terrorist group has been implicated in a string of high-profile cases in which its infiltrators in the judiciary and law enforcement are accused of using their power to imprison FETÖ critics. Ramazan Akyürek and Ali Fuat Yılmazer, who were senior officials in police intelligence at the time of the murder, face life imprisonment for charges of homicide and terrorism as well as the forgery and destroying of official documents, while other public officials face shorter prison terms for negligence and abuse of duty for their role in the cover-up.