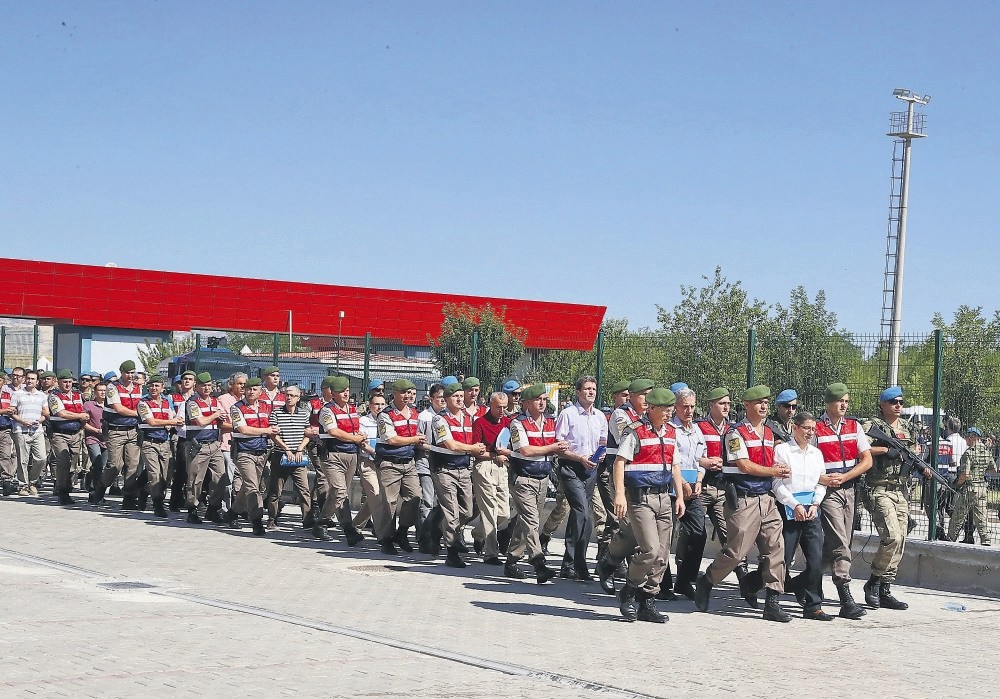 Kemal Batmaz, executive of a company controlled by FETu00d6, who is accused of leading the coup efforts, at the head of defendants as they are escorted to the courtroom by gendarmerie officers.
by daily sabah
Aug 03, 2017 12:00 am

In the biggest trial on the 2016 coup attempt, Kemal Batmaz, the executive of a company controlled by FETÖ is accused of commanding the putschists and faces life imprisonment, was the first to testify. He denies the charges despite ample evidence to the contrary

In the first in-depth trial on how the Gülenist Terror Group (FETÖ) tried to seize power through its infiltrators in the military on July 15, 2016, the defendants started their testimonies yesterday, one day after the court managed to wrap up the reading of a 4,000-plus page indictment. One of the most anticipated testimonies in the coup trials was of Kemal Batmaz, who is among 486 defendants in this "largest" coup trial. An ordinary looking man like fellow coup plotter Adil Öksüz, Batmaz was an executive of a business conglomerate controlled by FETÖ and was apparently assigned to command the putschists at Akıncı military base in the capital Ankara on July 15. Batmaz, who shared a ride to the base with Harun Biniş - another FETÖ-linked company executive among the defendants - denied the charges against him, despite security camera footage clearly showing him casually walking in the aisles of the command floor at Akıncı and being given a military salute by a pro-coup general. Testimony of Batmaz, who will likely be handed down multiple aggravated life sentences if convicted, baffled the court and people watching the trial as he repeatedly rejected it was him in the video. Kemal Batmaz is the most senior FETÖ member jailed in the coup plot case, while Adil Öksüz, a theology lecturer accused of masterminding the coup with Batmaz and the group's infiltrators in the army, remains at large.

Batmaz, who told the investigators he did not know Öksüz after he was first captured, told the court he "may have seen him in the office" of a mutual acquaintance. He acknowledged that it was him in a security camera video showing Öksüz walking with him at an Istanbul airport a few days before the coup attempt, but he played down the sighting as a "coincidence." Both men were returning from the United States where FETÖ leader Fetullah Gülen - the prime suspect in the Akıncı trial - lives, and prosecutors accuse Öksüz of having the approval of Gülen before executing the coup plan. Prosecutors also say Batmaz and Öksüz often traveled to the United States aboard the same flights, but the defendant again dismissed them as coincidences.

He said he never instructed the coup plotters and can only be linked to FETÖ for his career in companies linked to the group in the past. He said he had an appointment with Harun Biniş - another FETÖ-linked company employee who attended the meetings of Adil Öksüz with FETÖ's infiltrators in the army to plan the coup - on the day of the coup. He said he knew Biniş as both men worked in Kaynak, the same business conglomerate. "I was into real estate business, and he sought my advice to buy a plot of land in Kazan," he said, referring to the purpose of their appointment. This was also what Öksüz told the interrogators when he was first detained at the Akıncı base, claiming he was simply walking near the base to see the land he planned to buy.

Judge Selfet Giray then screened the video of Batmaz inside the Akıncı base, saying experts had thoroughly examined the footage and identified him in the video, but Batmaz denied it. The court then asked the same question to Hakan Evrim, the general who is seen giving a military salute to Batmaz. Evrim also claimed it was not him in the video. "It looks like me but I can't say for sure," Evrim said.

Batmaz also failed to explain why he called the same British phone number repeatedly before the coup attempt. The phone number, whose owner is not identified, was also called by 22 other defendants in the case.

When asked if it was Fetullah Gülen who ordered the coup bid, Batmaz said he "can't tell."

The suspects in the case are accused of commanding the coup plot from Akıncı Air Base where fighter jets and helicopters took off to strike strategic locations, including Parliament and places where anti-coup crowds had gathered. All defendants face life imprisonment for plotting to overthrow the government and to kill the country's leaders.

Along with Gülen, Öksüz, Batmaz and Biniş, two other nonmilitary FETÖ members are being tried for their role in coordinating the attempt to seize power.

The government declared war against FETÖ when it started a crackdown against its members in law enforcement, the judiciary and bureaucracy a few years ago. The coup attempt preceded a planned move to weed out FETÖ members in the military. The 461 suspects were captured when the coup bid was foiled thanks to a strong, unprecedented public resistance that cost the lives of 249 people who confronted the putschists. Seven, including FETÖ leader Gülen and Öksüz, remain at large. Öksüz disappeared after he was released in a controversial ruling by a local court immediately after the coup bid, while Gülen refuses to return to Turkey from Pennsylvania where he has been living for years. The remaining have been released pending trial.

The majority of defendants are soldiers, including former Air Force Cmdr. Gen. Akın Öztürk. Öztürk is accused of heading the Peace At Home Council of pro-coup soldiers and was captured at Akıncı during the coup bid. In a separate trial on the coup attempt, he claimed he simply visited the base to see his grandchildren. His son-in-law, Hakan Karakuş, is among the military officers who joined the coup attempt and is accused of commanding a fighter jet that carried out airstrikes against the anti-coup crowds.

The hearing was underway when Daily Sabah went to print. The trial is expected to continue until Aug. 19. It will likely take months before a final verdict is announced.

A large number of people, from President Recep Tayyip Erdoğan to army generals targeted by the putschists, lawmakers and families of civilians killed by the coup plotters spoke on Tuesday in their formal requests to the court to be admitted as co-plaintiffs.

An indictment on what happened at Akıncı Air Base during the July 15 coup attempt claims Gülen would have settled in a building at the base if the coup had succeeded. It names Öksüz and Batmaz as two point men for Gülen, who executed the coup attempt with the aid of Öztürk, a former general accused of coordinating the coup efforts as the leader of the junta's Peace At Home Council.

Gülen denies links to the coup, but evidence that surfaced after the putsch was quelled indicates he gave approval for the plot to seize power through FETÖ-linked military officers.

The indictment, accompanied with photos of Akıncı Air Base and images from security cameras showing those involved in the coup, claims Gülen was "number one" in the coup attempt, and Öksüz and Batmaz are named as his accomplices.

The 4,658-page indictment claims 10 civilians were involved in the coup attempt. Prosecutors say 11 F-16 jets dropped bombs on several locations, while two aircraft tried to scare people by creating sonic booms in Istanbul. Two other fighter jets were used to track down Erdoğan's plane as he was brought out of trouble's way when an elite team of assassins landed near the hotel where he was staying in southwestern Turkey.

The indictment, the most comprehensive of its kind so far in relation to the coup attempt, gives details on various episodes of the coup attempt that revolved around Akıncı Air Base. These include the bombing of police headquarters, the headquarters of a satellite provider, an elite military unit opposing the coup, Parliament and the streets near the Presidential Palace, as well as the dispatching of fighter jets from other cities to Ankara. The defendants are also accused of attempts to kidnap generals opposed to the coup in Istanbul and bring them to Akıncı Air Base. Chief of General Staff Gen. Hulusi Akar and other top military brass opposed to the coup were also held at the base, which was closed after the coup attempt.

The base would serve as the new headquarters of the Turkish military if the coup had succeeded and evidence indicates coup troops brought the military's flag, originally kept in the Office of the Chief of Staff, to the base. Gülen would "contact" Akar according to the indictment. Akar has told prosecutors that Hakan Evrim told him he could "arrange a phone call with our leader Gülen."