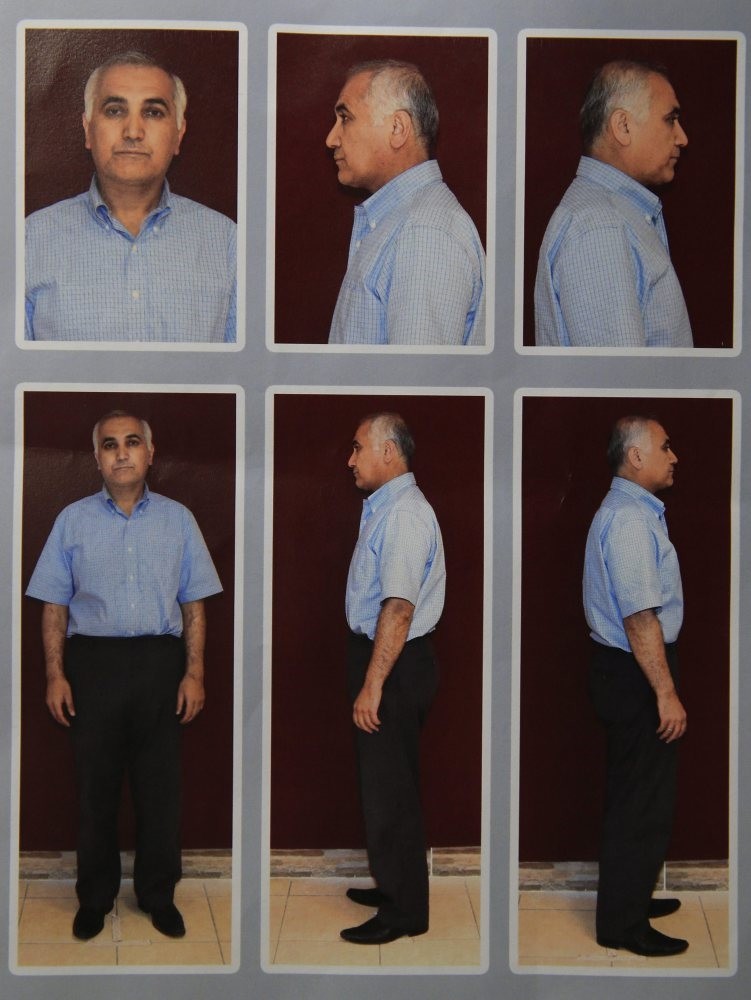 Seen here in photos taken during his detention, Adil u00d6ksu00fcz disappeared after he was released by a court in Ankara.
by Daily Sabah Aug 18, 2017 12:00 am

As suspicion grows that a key FETÖ figure accused of masterminding the July 15 coup attempt might be hiding in Germany, Turkish authorities called on Berlin to cooperate in locating him and other suspects believed to be hiding in the country and extradite them

Although ties are strained over Germany's reluctance to hand over terrorism suspects and willingness to allow terrorist groups to freely operate, Ankara is hopeful that Berlin will act in line with its wishes when it comes to Adil Öksüz. A theology lecturer by profession, Öksüz is a senior figure in the Gülenist Terror Group (FETÖ) and is accused of masterminding last year's July 15 coup attempt that killed 249 people across Turkey.

Öksüz is among a number of FETÖ suspects believed to be hiding in Germany, which Ankara also accuses of being a safe haven for the PKK, another terrorist group active in Turkey. Turkey issued a diplomatic correspondence to Germany on Wednesday, asking to investigate the claims that Öksüz was spotted in Germany.

"Germany is our ally and we have relations rooted in history. We expect Germany to act in line with our cooperation. No friend of Turkey can shelter a killer," Çelik said. "It would be worrying that someone wanted by Turkish security forces for involvement in killing of people would be housed by a friend," Çelik said, pointing to remarks from a German government spokesman on Tuesday. "They said they cannot confirm or deny if Öksüz was in Germany. You know what it means in diplomacy. You cannot speak of being an ally if you harbor a terrorist."

Justice Minister Abdülhamit Gül also made a phone call to his German counterpart, Heiko Maas, yesterday. The ministry did not say whether Öksüz was discussed in the call, but a statement said the two ministers spoke about judicial cooperation "in a constructive and positive atmosphere" and decided to meet in person as soon as possible.

Ankara has placed Öksüz in the red category of the country's most wanted terrorism suspects, offering a reward of up to TL 4 million ($1.1 million) for tips that lead to his capture. He is believed to have fled abroad as nationwide searches have failed to locate him.

Referred to as the "black box" of FETÖ, Öksüz reportedly acted as the Air Force leader of the terrorist group, which is known for its widespread infiltration of the military.

Last week, Turkish media reported that Öksüz was spotted in Frankfurt and Ulm, while others claimed that the German state of Baden-Württemberg granted him a temporary residency permit. In a report yesterday, the Yeni Şafak newspaper claimed that "Americans" allocated a cargo plane for Öksüz and he was flown to a NATO base in Wunstorf, Germany.

Turkey's state-run Anadolu Agency (AA) reported that German Foreign Ministry sources said there was no concrete information about whether or not Öksüz is in the country.

Öksüz, originally a theology lecturer who worked at a university in the city of Sakarya near Istanbul, was among the men dressed in civilian clothes who were captured near a military base in Ankara used as a command center for the coup attempt on July 15, 2016.

He was released hours later in a controversial ruling that was apparently based on Öksüz's defense that he was near the base to look for a piece of land to buy.

Fetullah Gülen and Öksüz are being tried in absentia in coup cases that saw the detention and arrests of hundreds of military officers linked to FETÖ.

Gülen, a former imam who has been living in Pennsylvania for years, denies the charges. He and Öksüz face multiple life sentences for their suspected role in the coup attempt that came three years after FETÖ members in the judiciary and law enforcement tried two other unsuccessful coup attempts.

Since last year's coup attempt, Ankara has worked tirelessly to locate FETÖ members worldwide, focusing on its commercial entities. European countries, which have also been accused of harboring supporters of other terrorist groups, have not responded to Ankara's extradition demands, unlike Arab and Asian countries that have carried out most of Ankara's demands.

Ankara singles out Germany among European countries for embracing some 250 fugitive diplomats and soldiers accused of involvement in the coup with suspected links to FETÖ. A report titled "The FETÖ Settlement in Germany and Germany's FETÖ Policy," says that FETÖ has been using Germany as its main functioning center and that German authorities have embraced the structures of the group with open arms.

Unconfirmed reports say that about 4,000 FETÖ suspects left for Germany after the coup attempt, while several suspects, including former military officers and diplomats accused of involvement in the coup attempt, applied for asylum. Germany is among the countries that Ankara accuses of doing little to address its terrorism concerns. Turkish leaders frequently criticize Berlin for allowing activities of terrorist groups, including the PKK and FETÖ.

FETÖ, which runs a global network of companies and schools, operates dozens of private schools, media outlets and companies in Germany as well. Çelik told reporters that Turkey presented "thousands of documents" about terrorist groups active in Germany and it was obvious that top FETÖ figures are hiding in Germany where they fled after the coup attempt.