FETÖ-trained brothers, all putschists, under spotlight 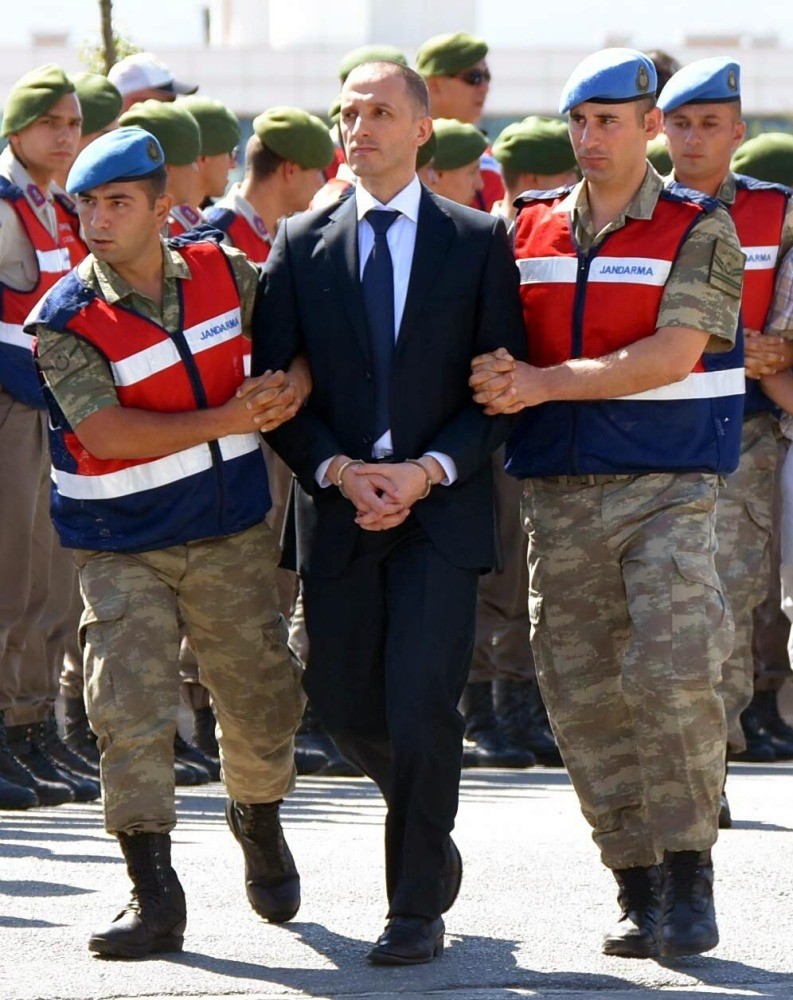 Former 1st Lt. Hasan Aslanbay was the first of five brothers to speak about their involvement in the July 15, 2016 coup attempt. The brothers were specifically chosen by the Gülenist Terror Group (FETÖ) to infiltrate the military and played important roles in the coup attempt, media outlets reported.

Aslanbay is among 47 defendants in a case regarding the assassination attempt targeting President Recep Tayyip Erdoğan on the coup night and claimed his innocence in a hearing Friday in Muğla, the southwestern province where Erdoğan was on vacation when the pro-coup troops stormed his hotel. Erdoğan dodged the assassins, leaving early after learning a coup was unfolding across the country. Aslanbay was the machine gunner in one of the helicopters that brought the would-be assassins to the hotel where two police officers were killed when they resisted the raid. Aslanbay claimed he did not fire a single shot and "deliberately damaged the machine gun" when he found out that his mission was to kill Erdoğan. "I was told that we were on an anti-terror mission," he said. Most defendants had claimed that they were sent to the hotel to capture a wanted senior figure of a terrorist group. After the hotel raid, pro-coup troops had to withdraw when police confronted them and were captured after hiding out in the countryside for weeks. Aslanbay and others face aggravated life imprisonment for their role in the coup bid which killed 249 people across the country.

Media outlets say Hasan Aslanbay and his four brothers, Hüseyin, Furkan, Rıdvan and Enes Aslanbay, were secret members of FETÖ, which evolved from a religious cult into a terrorist group with three coup attempts between 2013 and 2016. Authorities were aware of the presence of FETÖ sympathizers in the army and were preparing to a crackdown when the coup attempt took place, ostensibly to prevent the crackdown. A report in Doğan News Agency says Hasan, Hüseyin, Furkan, Rıdvan and Enes Aslanbay were persuaded to join FETÖ, which in turn helped them rise in the ranks of the army by supplying them with stolen answers to a military school exam. With the aid of other FETÖ infiltrators in the army, they were assigned to military units the terrorist group wanted them to be in. Furkan Aslanbay was assigned to the Special Forces Command, the elite military unit the putschists sought to capture and is accused of aiding Gen. Semih Terzi, who was shot by an anti-coup officer as he tried to take over Special Forces Command headquarters. An Aslanbay was among the soldiers who killed Ömer Halisdemir, the loyal officer hailed as a hero posthumously for his actions. Hüseyin Aslanbay commanded a team of putschists who held Air Force Cdr. Abidin Ünal and eight other generals hostage while the generals were attending a wedding ceremony in Istanbul on July 15. The two other brothers also joined the coup attempt and were expelled from the army, while all brothers have been remanded into custody.