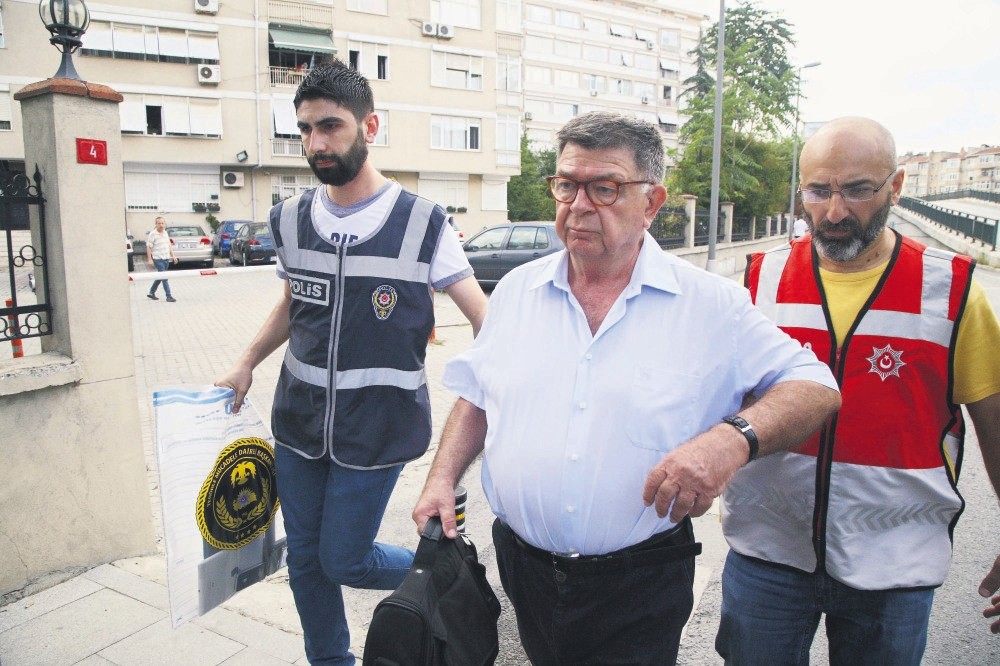 Former Zaman columnist u015eahin Alpay told an Istanbul court that he had no idea FETu00d6 was involved in anything illegal before last year's coup attempt.
by Daily Sabah Sep 20, 2017 12:00 am

An Istanbul court has begun to hear the testimonies of former Zaman executives and columnists, who have condemned the July 15 coup attempt and claimed they are innocent of all charges

At the trial of the columnists and executives of Zaman, the mouthpiece of the Gülenist Terror Group (FETÖ), many said they were deceived by the cult and condemned last year's deadly coup. Zaman, along with other media organs of FETÖ, were seized by the state before being shut down in the aftermath of the coup attempt on July 15 last year.

The trial of 31 suspects, 22 of whom are under arrest and one a fugitive, at the Istanbul court on Monday and yesterday was held to allow suspects to give their testimonies. The indictment accuses the suspects of trying to topple the constitutional order, the Parliament and the government and membership of an armed terrorist group. The indictment outlines how Zaman employees took the lead in attacking the government, staring from mid-2013, and took active part in the December 2013 judicial coup attempt, which involved spurious corruption accusations made against senior government officials by the use of tampered evidence.

FETÖ, led by fugitive Fetullah Gülen, infiltrated state institutions over decades, starting from the 1970s. By the 2000s, it had come to dominate many state institutions, especially the judiciary, police and the military, which it used for its own nefarious purposes.

Meanwhile, businessmen recruited provided financial backing to FETÖ, as well as members who were obligated to put aside a significant portion of their wages for the cult. FETÖ members are also known to have established charter schools in the U.S. and syphoning federal funds to its network. The FBI is currently investigating several charter schools for money laundering and other criminal activities.

These funds were used to create an enormous media empire, of which Zaman was the crown jewel.

One suspect, Şahin Alpay testified at the court on Monday, dismissing accusations that he was part of FETÖ. He said the reason why he worked at Zaman as a columnist was because no other newspaper would hire him. "I wanted to share my opinions and needed the money," he said.

He said he had believed the Gülen movement was based on the Sufi beliefs of Anatolia and established it network of schools, companies and associations to work for world peace and believed claims that the cult supported rights, freedoms, rule of law and liberal secular beliefs.

"My disappointment with the Gülen movement began with the military coup on July 15, 2016. I must admit that I had no idea the movement was involved in anything illegal until then." He said FETÖ's involvement in the coup would be revealed through court decision but all signs since July 15, 2016 had created an enormous sense of disappointment with the movement, Alpay said. "I condemn the July 16 coup attempt. I was mistaken not to have seen the dark side of the movement." He said he was innocent of all charges.

Another columnist who testified was Müztazer Türköne, who rejected all charges, claiming to have been among the leading anti-coup individuals in Turkey. Türköne commended the Turkish people for fighting against the military coup attempt on July 15, 2016. "I know the cost of a coup. That's why no one can accuse me of being a coup plotter. If anyone's bust is to be erected, it needs to be mine."

Another columnist Ali Bulaç also denied the charges, describing FETÖ as a delicately gilded vase that was dropped on the floor on July 15, 2016 and broke, spilling out all kinds of disgusting crimes, activities and other shameful acts.

He said the movement was poisoned by the power it accumulated. He accused Gülen and his executives of creating an aura of sanctity, tricking and victimizing disciples. Bulaç said he protected the democratically-elected government, refusing to join FETÖ's attacks. "Many executives of Gülen's media collected all their belongings beforehand and escaped. Those left behind had no idea what was going on."

Many executives of FETÖ-linked media, including Zaman's Editor-in-Chief Ekrem Dumanlı, remain fugitives and are believed to have escaped overseas.