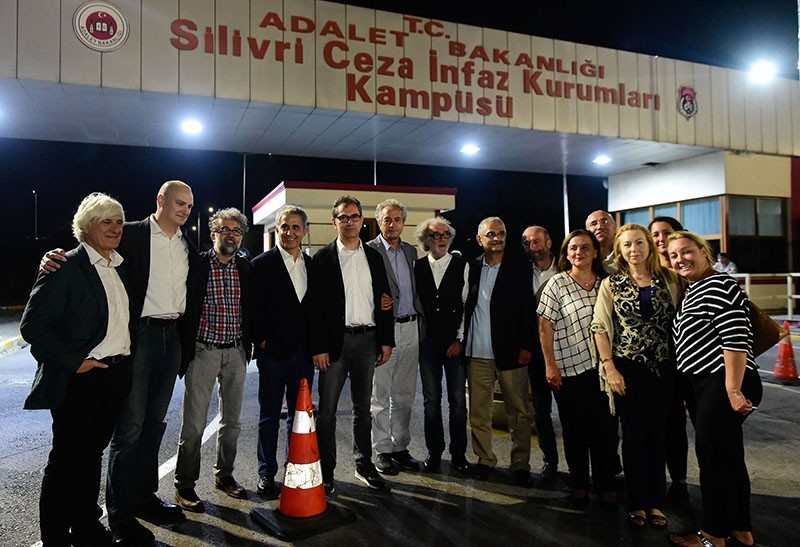 Kadri Gürsel, a columnist for the Cumhuriyet daily, became the only high-profile defendant to be released in a trial in which the daily’s staff is accused of aiding and abetting terrorist groups.

Cumhuriyet daily columnist and International Press Institute (IPI) board member Kadri Gürsel, who was standing trial for suspected links to terror groups including the Gülenist Terror Group (FETÖ), has been released late from prison after spending 330 days behind the bars.

Gürsel was the only defendant to be released under judicial control late Monday by the court trying the daily's staff on terrorism charges. Gürsel and others are accused of aiding and abetting terrorist groups, including the PKK and Gülenist Terror Group (FETÖ). In the third hearing of the trial in Istanbul, the court imposed a travel ban for Gürsel and adjourned to Oct. 31 before rejecting an appeal for the release of five other defendants.

Authorities arrested Gürsel and five other defendants from the newspaper following the July 15, 2016 coup attempt blamed on FETÖ. Fourteen other defendants were released earlier pending trial.

The court ruled there is no grounds to keep Gürsel in custody, as the evidence against and in favor of the defendant has already been collected and he is not suspected of hiding any evidence against him. Judges ruled out the release of Ahmet Şık, the newspaper's executive Akın Atalay, Editor-in-Chief Murat Sabuncu and other defendants, citing "strong suspicion of involvement in a crime." The court also ordered the filing of a complaint against the websites of two newspapers that published reports on the verdict before it was announced.

Family and friends of Gürsel welcomed him outside the prison complex in the Silivri district where hundreds with supposed linked to FETÖ are being held. Gürsel told reporters he was not happy as the Cumhuriyet staff are still imprisoned on what he called "unjust, baseless allegations."

The prosecutors' 324-page indictment claims Cumhuriyet was effectively taken over by FETÖ and used to "veil the actions of terrorist groups." The newspaper and the suspects deny the accusations. The majority of the evidence in the indictment comes from social media posts, along with allegations that staff members had been in contact with users of ByLock, an encrypted messaging app the government says FETÖ members used.

Prosecutors are seeking between seven-and-a-half and 15 years in prison for former editor-in-chief Can Dündar, who fled to Germany, Sabuncu, Gürsel, Aydın Engin, Bülent Yener and Günseli Özaltay for helping an armed terrorist organization while not being a member.

Dündar is also among the suspects of the espionage case related to publishing confidential footage in the controversial 2014 MİT trucks raid.

Defendants have been in pre-trial detention since their arrests in November.

Cumhuriyet had long followed a secular, left-wing, republican editorial policy with a nationalist tone. However, in recent years, the paper drew fire from some of its reader base for adopting a tone that they claimed supports the PKK and, most recently, FETÖ.

Ahmet Şık, who is being charged with "helping and being a member of the PKK and the Revolutionary People's Liberation Party-Front (DHKP-C)," is the author of the book İmamın Ordusu (The Imam's Army) that revealed FETÖ structure within the state, which was used as evidence in various coup-plot investigations. He was also arrested as one of the suspects during sham Ergenekon coup plot trials launched by FETÖ-linked prosecutors using illegally gathered evidence.