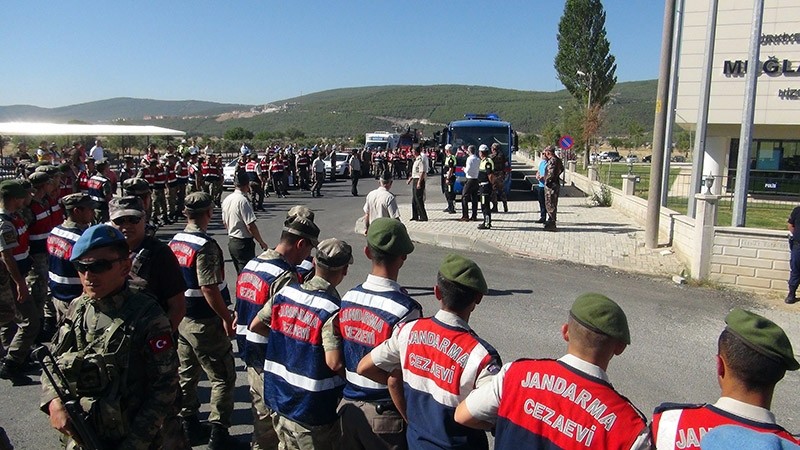 The verdict of putschist soldiers who tried to kill President Erdoğan during FETÖ’s coup attempt last year was issued Wednesday, with the general coordinating the mission and several others sentenced to life terms

A widely anticipated verdict in trials regarding the July 15, 2016 coup attempt was announced Wednesday, as a pro-coup general and 39 others were sentenced to four instances of aggravated life sentences for an attempt to assassinate President Recep Tayyip Erdoğan. One defendant was acquitted.

The court in southwestern Turkey's Muğla – the province where Erdoğan was spending his vacation when the coup attempt unfolded – ordered that charges against Fetullah Gülen, the leader of the Gülenist Terror Group (FETÖ), be separated from the case. The charges against Burkay Karatepe, a former captain who remains on the run and Özcan Karacan, former lieutenant colonel who was captured in August, were also separated.

FETÖ is accused of masterminding the putsch bid carried out by its infiltrators in the army, and Gülen is the prime suspect in all cases related to the deadly coup attempt that killed 249 people across the country last year.

Forty-seven defendants in the case, including 37 former military personnel, have been on trial since February. Several suspects were captured in the countryside in Muğla province, discovered in hiding days after the coup attempt. Gökhan Şahin Sönmezateş, the brigadier general who coordinated the mission to assassinate Erdoğan and selected the teams of assassins who came from the nearby city of İzmir to Muğla, was captured in Ankara.

Sönmezateş and others were sentenced to four life sentences for both the coup attempt and the killing of two police officers. Ali Yazıcı, a former military aide to Erdoğan who allegedly sought to locate the president during the coup attempt to inform the coup plotters of his whereabouts, was sentenced to 18 years in prison. He could still face a life sentence in two other coup-related cases underway in Ankara. The verdict on Gülen could also be announced during a main trial that is still underway in Ankara, where trials are ongoing against the former preacher and dozens of others, including Akın Öztürk, the general who led the putschist Peace At Home Council.

Former non-commissioned officer Zekeriya Kuzu, who was dubbed as the FETÖ "imam" of Çiğli Air Base in Izmir where the commando teams were stationed, was also given four aggravated life imprisonment terms. In addition to life sentences, Kuzu was also sentenced to 54 years in jail for seizing wallets of three police officers during the raid.

Former Lt. Col. Hüseyin Yılmaz, who was accused of aiding the would-be assassins, was acquitted. Yılmaz has long claimed that it was not him who told Sönmezateş the name of the hotel where Erdoğan was staying on July 15, 2016. Yılmaz was at Akıncı Air Base, the putschist command center in Ankara, during the coup attempt, and currently among the suspects of Akıncı Air Base Trial.

During the coup attempt, Erdoğan and his family were staying at a hotel in Marmaris, a popular vacation resort in Muğla province. When the president learned that a coup was unfolding across the country, he quickly left the hotel and flew to Istanbul, where he rallied crowds to confront the putschists.

Two teams of putschist officers, all from an elite military unit, had previously arrived at the hotel to kill or capture Erdoğan and engaged in a shootout with police that were guarding the venue. The soldiers managed to escape after the shootout in which two police officers were killed.

Throughout the hearings, defendants had denied charges while Sönmezateş was the only one to admit that he had willingly joined the coup attempt. Other military officers in lower ranks claimed that they thought they had been sent to capture "a senior terrorist." Most defendants also insisted that they were misled and "another team of soldiers" were actually sent before them to the hotel, although they failed to provide evidence regarding these claims.

When asked to give their last statements before the announcement of the verdicts in court, the defendants again claimed that they were innocent. Sönmezateş said the court did not look into facts while former Captain Ergün Şahin said he only followed "martial law directive" and would "do the same thing" if he was ordered to do so again.

Presiding Judge Emirşah Baştoğ countered the defendants' claim that the court was under pressure and said the trial was concluded in its normal course.

Outside the courthouse, a crowd gathered while the defendants were brought into court under tight security measures. Protesters chanted slogans demanding the death penalty for the defendants. Public calls for the reinstatement of the death penalty were elevated after the coup attempt and Erdoğan has pledged that he will sign the decree to reinstate the now abolished death penalty if approved in Parliament.

Ravza Kavakçı Kan, deputy chairman of the ruling Justice and Development Party (AK Party), was among those at the final hearing of the trial. Speaking to Anadolu Agency (AA) after the verdict, Kan said they never doubted that "justice would prevail" in the case. "This instills hope that more verdicts will be made over this ugly, treacherous coup attempt," she said.