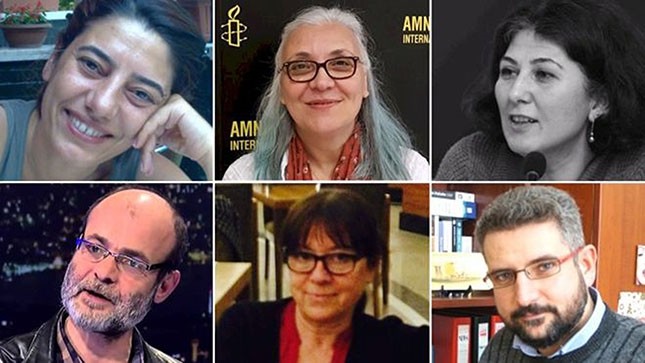 A prosecutor from the terrorism and organized crime bureau of the Istanbul Chief Public Prosecutor's Office has sought up to 15 years in jail for 11 suspects linked to several NGO's detained at a meeting in July over terror group membership and aiding charges.

The suspects, including one German national, one Swedish national and nine Turkish nationals were detained on July 5 at a meeting in Büyükada of Istanbul's Princes' Islands.

In the indictment, the prosecutor charged the suspects with aiming to incite violent and chaotic mass public protests during main opposition Republican People's Party Chairman Kemal Kılıçdaroğlu's "Justice" march between June 15 and July 15.

Kılıçdaroğlu and fellow party members had walked from the capital Ankara to Istanbul to demand what they called "justice" for people detained for their links to terrorist groups, particularly FETÖ.

The indictment likened the planned protests to those in Gezi Park riots of 2013.

Taner Kılıç, a representative of Amnesty International in Turkey, was detained earlier for using ByLock, an encrypted messaging app exclusively used by the Gülenist Terror Group (FETÖ), which is responsible of last year's failed coup attempt.

Steudtner's arrest was among the issues deepening the ongoing diplomatic spat between Turkey and Germany.