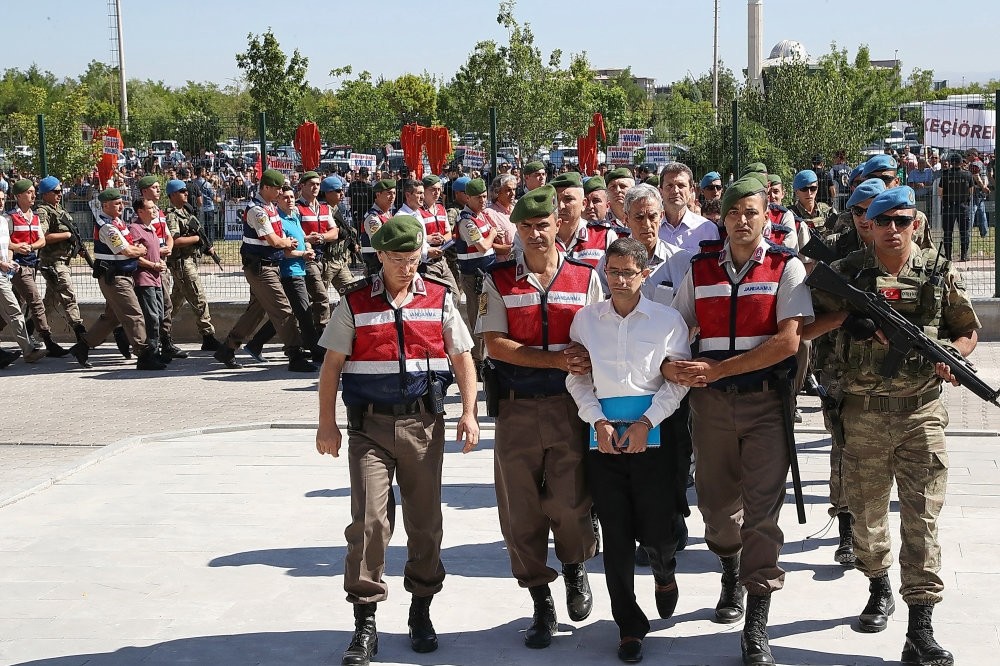 Soldiers escort Kemal Batmaz to the courthouse for a hearing of the main coup trial in Ankara.
by Daily Sabah Oct 18, 2017 12:00 am

Two suspects accused of working with Kemal Batmaz, a jailed FETÖ member accused of masterminding last year's coup attempt, were arrested while still in contact with the group's infiltrators in the military, media reports say

Police in the central city of Konya arrested two suspects who were allegedly accomplices of Kemal Batmaz, one of the suspected masterminds of last year's July 15 coup attempt. The suspects, identified as Zafer Çay and Alper Karabulut, were captured in an operation after a Gülenist Terror Group (FETÖ) infiltrator in the army confessed to his links to the two men. The suspects were reportedly organizing meetings with the group's infiltrators in the military to keep them mobilized after the post-coup crackdown dealt a major blow to FETÖ.

Batmaz, one of 486 defendants in the main coup trial, was the executive of Kaynak Kağıt, a paper company linked to the business conglomerate with the same name. He was caught near Akıncı Air Base in the capital of Ankara, a location used as a command center for the coup plotters hours after the bloody insurrection was quelled. Prosecutors say he acted with Adil Öksüz, a fugitive FETÖ figure, to plot the coup with the aid of the group's infiltrators in the military.

The two suspects, both teachers by profession, are accused of being "secret brothers" for FETÖ-linked military officers in the Air Force. "Brother" was a term used for civilian FETÖ members commanding the group's infiltrators in the military, law enforcement and other similar institutions.

A lieutenant deployed in Istanbul informed authorities about the two men in exchange for a reduction of his sentence after he was arrested for FETÖ links. The unidentified officer told authorities that Çay and Karabulut contacted him after the coup attempt and requested a meeting. The suspects were captured in the group's "gaybubet" ("absence") houses, used as hideouts for fugitive members.

The investigation based on statements of other former FETÖ members shows that Karabulut, who used code name "Yavuz," was regularly meeting with secret infiltrators of FETÖ in the military long after the coup attempt, and the officers were still donating money for the terrorist group. Karabulut and Çay were responsible for keeping the spirits high among still-hidden infiltrators of the group in the military. Authorities say that, although the group has largely been weeded out, it still seeks to deter members from severing ties with the group.

An indictment on what happened at Akıncı names U.S.-based leader Fetullah Gülen as the prime suspect in the coup bid and says the base was intended to be used as Gülen's home if putschists had been successful. Gülen denies any links to the coup, but evidence that surfaced after the thwarted coup attempt shows that he actually gave approval for the plot to seize power through FETÖ-linked military officers, ranging from generals to noncommissioned officers. The indictment, accompanied with photos of Akıncı Air Base and images from security camera footage showing those involved in the coup, says Gülen was "number one" in the coup attempt, while Adil Öksüz and Kemal Batmaz, two "civilian" members of FETÖ, are named as his accomplices. Öksüz was nabbed by security forces at the base after the coup was quelled, while Batmaz is seen in the security camera footage included in the indictment walking freely in the aisles of the military base's command floor and at some point, receiving a military salute from an officer. Batmaz has denied he had any links with FETÖ and was simply near the base "to check a plot of land he planned to purchase" in the company of Harun Biniş, another FETÖ figure captured near the base. It was the exact same testimony given by Öksüz to authorities when he was nabbed. However, documents sent to Turkish authorities by U.S. Homeland Security shows Batmaz had traveled to the country to visit Gülen.

FETÖ, which has posed as a religious charity for years, is blamed for masterminding the coup attempt last year as well as two similar attempts to topple the government in 2013. Judiciary authorities say the group used its infiltrators in the military, law enforcement, bureaucracy and judiciary for the insurrection.