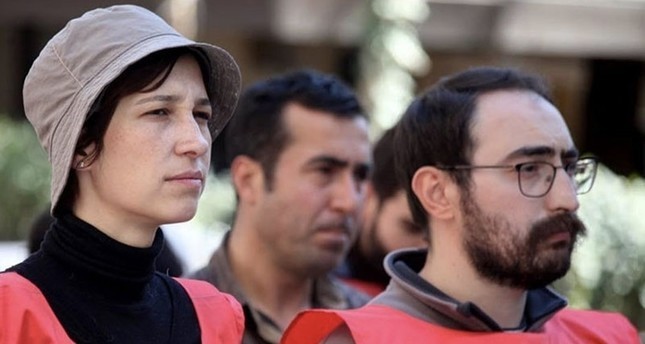 The prosecutor in the trial of former teacher and terror suspect Nuriye Gu00fclmen (L) has demanded her conditional release. (Sabah File Photo)
by Daily Sabah Dec 01, 2017 12:00 am

Turkish court ruled late Friday for the release of Nuriye Gülmen, a former teacher who launched a hunger strike after being expelled from the profession due to suspected ties to the Revolutionary People's Liberation Party-Front (DHKP-C) terror probe.

The court acquitted Semih Özakça, who was arrested along with Gülmen.

Gülmen and Özakça were arrested in late May, on the 75th day of their hunger strike in Ankara where they were protesting being dismissed from their posts in a decision that was the result of state of emergency decrees imposed after the 2016 coup attempt.

Both defendants are accused of being members of the Revolutionary People's Liberation Party-Front (DHKP-C) terrorist group. In a string of attacks targeting large cities, the DHKP-C is also responsible for a 2013 suicide bombing targeting the U.S. Embassy in Ankara.

Berk Ercan, also a DHKP-C member, told the court in Friday's hearing that he knew both suspects as being active members of the group in Istanbul as well as the western city of Eskişehir. Ercan said Gülmen was among group members who planned the preparation of homemade explosives to be used against security forces during the funeral of a rioter involved in the 2013 Gezi Park riots.