Mystery lingers over civilians at heart of FETÖ's coup attempt 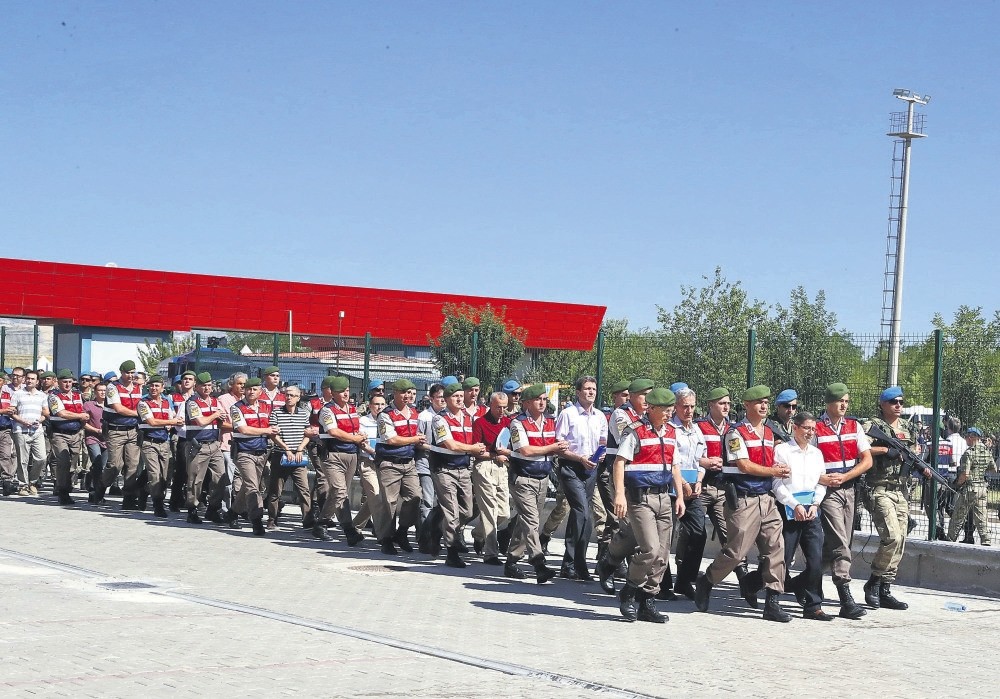 Gendarmeries accompany Kemal Batmaz (front), one of alleged masterminds of the coup attempt and among the civilians captured at Aku0131ncu0131 Air Base.
by Ersan Atar Dec 13, 2017 12:00 am

A handful of non-military figures were captured at Akıncı, a military base at the heart of the July 15, 2016 coup attempt, but no progress has been made in identifying some 30 plain-clothed people caught on security camera footage. Although the Chief Prosecutor's Office in the capital Ankara, where Akıncı is located, is continuing its investigations to identify the "civilians," so far, they have been unsuccessful. The suspects are believed to be point men for the Gülenist Terror Group (FETÖ), blamed as the mastermind behind the putsch bid that left 249 people dead.

After combing hours of security camera footage from the base, investigators managed to identify most of the suspects, including military personnel in civilian clothes and uniformed soldiers all except 30 people sighted in a mess hall in Akıncı. The mess hall was also the place where Adil Öksüz, the fugitive FETÖ member accused of devising the coup plot, was sighted by witnesses. Prosecutors are now seeking assistance from police, intelligence services and the Turkish Army. The visitor records for the base on July 15 and before are being scanned, while investigators try to match the police records of known FETÖ-linked suspects to the people seen in the camera footage.

An indictment on what happened at Akıncı names U.S.-based leader Fetullah Gülen as the prime suspect in the coup bid and says the base was intended to be used as Gülen's home if the putschists had been successful. Gülen denies any links to the coup, but evidence that surfaced after the thwarted coup attempt shows that he actually gave approval for the plot to seize power through FETÖ-linked military officers, ranging from generals to noncommissioned officers.

The indictment says Gülen was "number one" in the coup attempt while Adil Öksüz and Kemal Batmaz, two "civilian" members of FETÖ, are named as his accomplices. Öksüz was nabbed by security forces at the base after the coup was quelled, while Batmaz is seen in the security camera footage, included in the indictment, walking freely in the aisles of the military base's command floor and at some point, receiving a military salute from an officer.

Batmaz has denied he had any links to FETÖ and was simply near the base "to check a plot of land he planned to purchase" in the company of Harun Biniş, another FETÖ figure captured near the base. It was the exact same testimony given by Öksüz to authorities when he was nabbed.

Adil Öksüz was released by judges shortly after his detention and those who aided in his release were later arrested for the controversial verdict. Hakan Çiçek, owner of a FETÖ-linked school in Ankara, was another "civilian" caught in the base. Çiçek has claimed he was invited to the base by Ahmet Özçetin, a pro-coup officer for "a social event," but it was later revealed that there was no such event at the base at the time of the coup attempt.

Nurettin Oruç, a documentary filmmaker linked to the terrorist group, who was among "civilians" captured near the base, has claimed he was in the area to scout locations for a new documentary.

FETÖ, which has posed as a religious charity for years, is blamed for masterminding the coup attempt last year as well as two similar attempts to topple the government in 2013.

Judicial authorities say the group used its infiltrators in the military, law enforcement, bureaucracy and judiciary for the coup attempt. Thousands were arrested and detained after the failed coup bid for links to the terrorist group, while trials over the incident began last year. All those involved in the coup face life imprisonment or lesser prison terms for membership of a terrorist group.