Arrest warrants out for 130 FETÖ suspects throughout Turkey 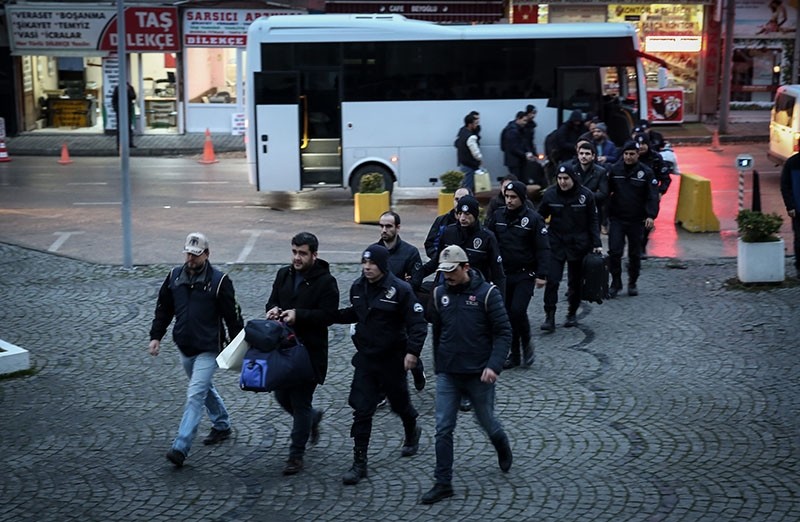 Arrest warrants were issued for more than 130 suspects across Turkey yesterday for their links to the Gülenist Terror Group (FETÖ). The operations are the latest chapter in Turkey's multi-year crackdown on the group blamed for three coup attempts in 2013 and 2016. The suspects include on-duty military personnel, former soldiers, executives and the staff of now-defunct labor unions associated with the terrorist group.

FETÖ, which branded itself as the Hizmet (Service) Movement for decades before moving to topple the government, is known for attracting masses by posing as a charity network with religious undertones.

After 249 people were killed on July 15, 2016 in a coup bid by the group's infiltrators in the military, authorities stepped up their fight against the group whose tentacles extend from Turkey to the far corners of the globe where it runs a network of companies and schools.

A public prosecutor in the central province of Konya issued arrest warrants for 70 FETÖ suspects, including 58 former and active soldiers, and police searched for the suspects across 27 provinces as part of nationwide operations.

Twelve of the suspects were soldiers who had been dismissed from the military. A total of 40 suspects had been detained so far.

Among the suspects are seven union administrators of the former FETÖ-affiliated Aksiyon Labor Confederation and 15 users of ByLock, an encrypted messaging app exclusively used by FETÖ members to communicate and relay messages of FETÖ's U.S.-based leader Fetullah Gülen to the masses linked to the group. Of them, 33 have already been arrested so far.

Gülen had claimed he was not involved in the attempt though investigators found out he had secretly instructed his followers to seize power, and strong evidence shows most officers in the coup attempt were associated with FETÖ.

Turkey is seeking Gülen's extradition from the U.S. or at least his arrest to prevent his escape. Fourteen soldiers were also arrested in simultaneous operations in nine different provinces as part of a probe launched by northeastern Bayburt Chief Public Prosecutor's Office against the terrorist group.

A prosecutor's office in Kocaeli also issued arrest warrants for 26 soldiers, including five dismissed, one retired and 20 on-duty soldiers.

In related news, a gendarmerie colonel, who was detained for his suspected links to FETÖ, invoked the remorse law for a reduced sentence and confessed to his ties to the group, giving the names of suspected Gülenists to authorities.

Yılmaz Özdemir had been recently arrested while serving as a gendarmerie commander in the northern province of Düzce in an operation targeting the group's military infiltrators.

Özdemir confessed his intimate ties with the group, which is known for recruiting military cadets to its cause, and told investigators that he was regularly in touch with "brothers," a name given to FETÖ's point men in charge of infiltrators in the army and other institutions.

Thousands of soldiers were dismissed from their posts, detained or arrested after the coup attempt, and coup trials have been underway since late 2016 across the country.

In Thursday's trial, a lieutenant colonel held on coup charges told the court how the coup attempt unfolded at a military base that houses a school for helicopter pilots in the capital Ankara.

Murat Bolat, who is among 155 defendants accused of involvement in the putsch bid, told an Ankara court yesterday that he, in fact, opposed the coup and blamed other military officers.

Bolat was tasked by putschists to abduct Hakan Fidan, the chief of Turkey's intelligence service, during the coup attempt. Fidan was among the few people who avoided abduction by putschists who managed to hold the army chief and top commanders opposing the coup hostage for hours.

Bolat told the court that Halil Gül and Özcan Karacan, two other lieutenant colonels in the Peace At Home Council of putschists, plotted to "kidnap President Recep Tayyip Erdoğan." Erdoğan was on vacation in southwestern Turkey when putschists sent two teams of assassins to kill him. Upon learning a coup attempt was unfolding, Erdoğan flew to Istanbul where he mobilized the public to confront the pro-coup troops.

Bolat said Gül had asked him one day before the coup if he could do "fast rope," a technique used to quickly deploy troops from a helicopter to the ground. When he inquired why he was asked to do it, Gül told him they would "take Hakan Fidan." He said he asked for a written order from Gül, but the putschist officer failed to give him one and "threatened" him when he questioned the order.

"Karacan was also in Gül's room. They told me that they had formed teams in Istanbul and İzmir, and they would also take the president. They had a list containing the names of pilots tasked with this on the desk," he told the court.