Trial of Daesh accomplices in Sultanahmet bombing postponed to Jan. 24 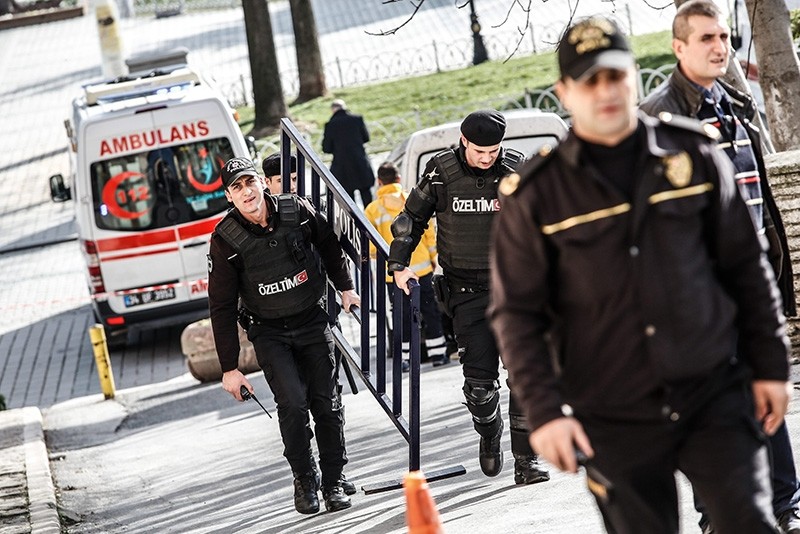 The trial of 26 Daesh-linked suspects involved in a January 2016 suicide bombing that killed 12 German tourists in Istanbul's Sultanahmet resumed Monday.

The court delegation decided to continue with the cases of four arrested suspects, three of whom face super-aggravated life sentences, postponing the verdict deadline to Jan. 24.

The four prisoners and their lawyers attended the trial by the Istanbul 14th High Criminal Court, which had been delayed in November 2016.

After declarations were taken against the case of the defendants, the detained defendants demanded their release without accepting the charges against them.

One defendant, Atala El Hasan El Mayyuf, reportedly told the court he should be released to look after his family and that his children could also "go join Daesh."

The defendants' lawyers also demanded acquittal of their clients.

The public prosecutor asked for the refusal of the detainees' request for release.

Turkish authorities had previously identified the bomber as a 28-year-old Syrian national, Nabil Fadli, who blew himself up in Istanbul's Sultanahmet district on Jan. 12, 2016, killing 12 German citizens and injuring 16 others.

Prosecutors are seeking super-aggravated life sentences for three of the defendants for deliberate murder "with the aim of terrorism" and 15 years behind bars for one other.

A fifth suspect was released in November. The remaining 21 are being tried in absentia.

An indictment into the attack said that the four men—three Syrians and one Iraqi—helped smuggle the bomb and the suicide bombers into Turkey across the Syrian border one month ahead of the attack.

The high-ranking suspected Daesh terrorist who planned the attack is believed to be in Iraq, according to the indictment.