Officer once heralded as hero confesses links to FETÖ 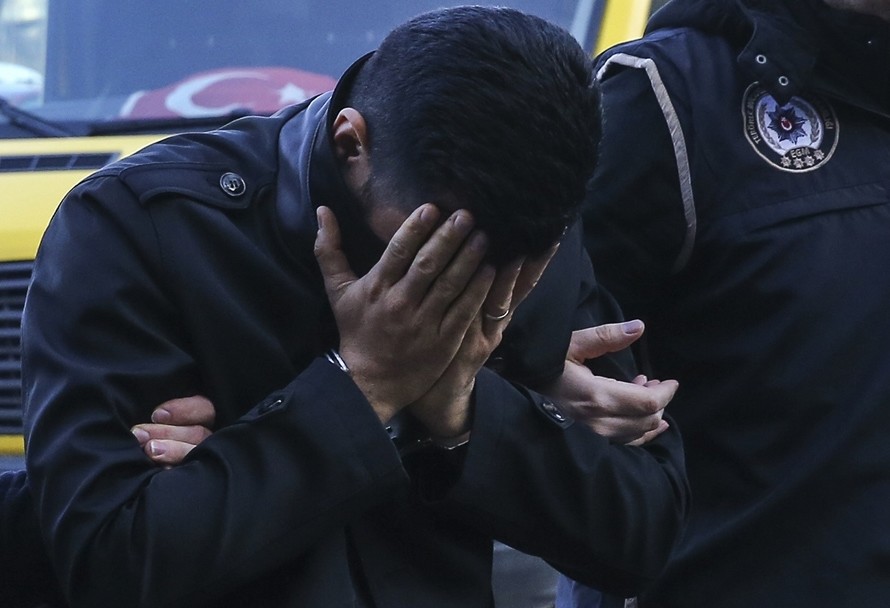 Burak Aku0131n confessed he joined the terrorist group before he was admitted to military school.
by Daily Sabah Jan 10, 2018 12:00 am

Burak Akın, who was shot during the July 15, 2016, coup attempt and was counted among the heroic officers for resisting the bid blamed on the Gülenist Terror Group has confessed that he was actually a member of the group as well.

Capt. Akın, who served as a guarding officer for the Land Forces Com. Yaşar Güler, was accompanying Güler's predecessor Salih Zeki Çolak when Çolak was held by pro-coup troops storming the army headquarters in Ankara. Akın was shot in the leg when putschists opened fire on soldiers escorting Çolak. In December, Akın surprisingly turned himself into authorities and confessed how he was introduced to the terrorist group before the start of his military career. Earlier he gave the names of two other officers he knew as followers of FETÖ and all three were released pending trial on Monday as they invoked a remorse law granting sentence reduction to those collaborating with authorities.

The former officer told investigators questioning him that he decided to surrender when he "realized that authorities would catch him." He said he regretted joining FETÖ and claimed he did not know the "true face" of the group which long posed as a charity movement with religious undertones.

Akın said his first contact with the group was in 1996 when a man who called himself Ali approached him offering extra courses while he was studying for university admission exams. He then regularly visited M.Ç. (Ali's initials), who tutored younger students, at a house where other university students also stayed. FETÖ is known for recruiting young and bright high school students and guiding them to the military, law schools and police academy, effectively planting their infiltrators in those institutions. If students fail at exams, the group helps them pass anyway by supplying them with stolen questions and answers.

On July 15, 2016, the group's infiltrators in the military moved to seize power upon instructions by senior members of FETÖ. Though they ultimately failed, the putsch attempt killed 249 people, mostly civilians, resisting the pro-coup soldiers.

According to Akın, he and other students came together with university students linked to FETÖ for regular meetings, where they listened to audio tapes of speeches made by Fetullah Gülen, the leader of the terrorist group. Gülen, who currently resides in Pennsylvania, U.S., is the "number one" suspect in all coup-related trials where he faces multiple life sentences."M.Ç. asked me in 1997 if I wanted to attend a military high school. He knew I dreamt of being a soldier. He and others helped me in admission interviews for military school and how to respond to tricky questions," Akın said. The military, which once positioned itself as the ultimate secular institution, classified FETÖ as a religious group. FETÖ dodged suspicion in the army by making its members pose as non-religious people. "They prepared me for questions such as if I would accept my wife wearing a bikini," Akın said in his confession.

The group was so eager to have Akın in the military, they even sent someone that Akın says was "probably a doctor" to examine his health to see whether he was fit for military service. When Akın was admitted to military school, FETÖ members contacted him again and told him to tell his family that he severed ties with Hizmet (the name FETÖ gives itself).

Throughout his career, Akın hid his ties to the group and when he asked a fellow soldier if he was "one of us," he was reprimanded by M.Ç. who served as his "brother" (a point man for military infiltrators for FETÖ). "M.Ç. told me that I should be 'alone' while serving in the military." Like other infiltrators, Akın assumed a "nickname" and everyone he knew from the terrorist group knew him as "Cenk" except his handlers in FETÖ. He said he had secret meetings with point men from the group while he was in high school and the military academy. Before enrolling in the academy, he considered leaving the group and stopped meeting with his handlers. "Then, one day, M.Ç. suddenly found me in a public bus and urged me to attend the meetings again. I had to contact them again out of gratitude because they had helped me enter military school," he said in his confessions.

After his graduation, Akın was instructed by FETÖ's point men to a share a house with a fellow officer who would later be dismissed from his post for his links to the terrorist group.

Two point men, who used code names, regularly visited them between 2005 and 2006 and they would together read books written by Gülen and watch videos of his speeches. When the officer sought to join the Special Forces of the Turkish Army, two point men scolded him for "not consulting them."

Up until the coup attempt, Akın regularly met FETÖ members in secret and sometimes open meetings. He once again thought about quitting, he said, but a point man he named Hami told him that he would "receive a slap of passion from God" - a euphemism for punishment of those quitting the mafia-like group. Former followers are often victim of smear campaigns and some who stopped monthly payments to the group or refused to give "donations" were victims of sham trials by FETÖ infiltrators in the police and judiciary. "I thought that it would hurt my career and I decided to continue attending meetings again," Akın said.

Akın admitted that FETÖ used him mainly to learn about other military officers, saying, "They often asked me if a certain officer I knew was 'good or bad,' meaning that if that officer can be recruited for the terrorist group." He said that he was instructed by point men not to pray and not to abstain from drinking in order to not to show himself as a practicing Muslim.

Since the coup attempt, tens of thousands of suspects have been detained or arrested for their links to FETÖ.

Yesterday, six officers including a general, were sentenced to life in a coup trial in the western city of Denizli. Brig. Gen. Kamil Özhan Özbakır, former commander of a commando brigade in the city and former Col. Erol Akman who was the commander of another commando base, were sentenced to aggravated life sentences while four former officers were sentenced to life. Özbakır and Akman were convicted of sending 550 soldiers to the capital Ankara via an airport in Denizli, to help the pro-coup troops in the Turkish capital. A conscript accused of erasing security camera footage related to the coup bid was sentenced to one year and eight months in prison while another 64 people were released.