Trial on 1997 coup nears end, but could just be beginning 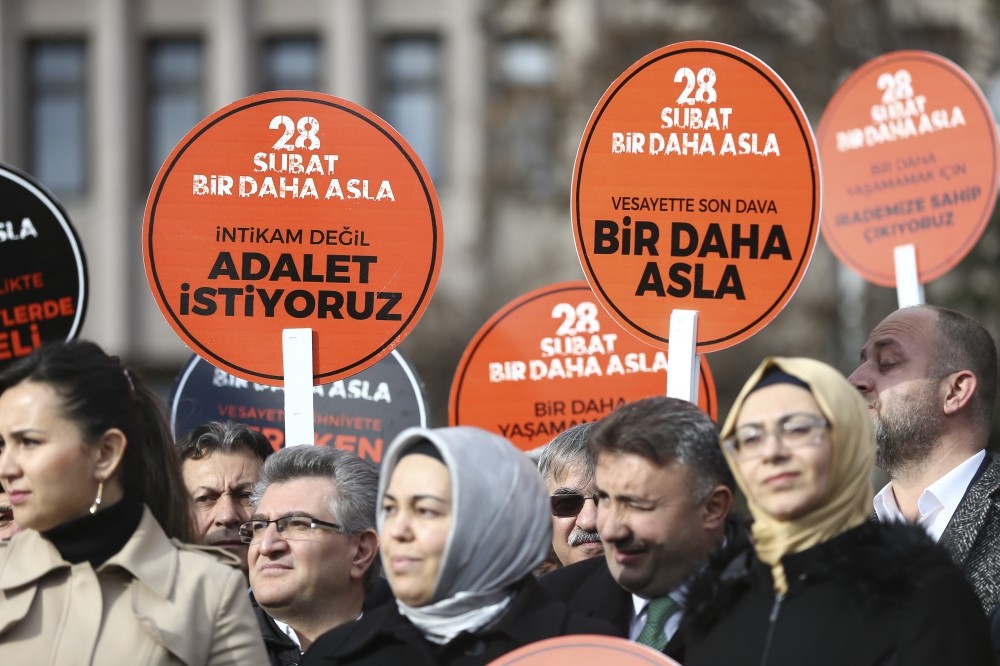 Activists hold placards reading ,Feb. 28, Never Again, We Want Justice, Not Revenge,, outside the Ankara courthouse where defendants accused of the coup are on trial.
by Compiled from Wire Services Feb 13, 2018 12:00 am

A week of hearings for the final pleas began yesterday in Ankara for defendants on trial for the Feb. 28, 1997 coup while activists call for a wider trial for media and other actors that helped the military overthrow the government and oppress thousands

The 97th hearing in a trial of dozens accused of running the Feb. 28, 1997 coup opened in Ankara yesterday. This week will see the final pleas by defendants, mostly top military brass accused of scheming to topple the government over two decades ago.

The coup, which came 17 years after a previous military takeover, was a lengthy process that derailed lives of thousands deemed reactionary by the secular elite behind it. Activists watching the trial hope that it will also pave the way for another investigation into the process, particularly civilian assistance to putschist generals.

The trial started six years ago, but all the defendants, including a former military chief, were released pending trial. In December, prosecutors asked for life imprisonment for 60 suspects, including former Chief of General Staff Gen. İsmail Hakkı Karadayı. An ultimatum to the government from the military on Feb. 28, 1997 led to the resignation of the government and further boosted a crackdown on mainly conservative people in the country derided as reactionaries. The coup did not involve killings, and has been called a postmodern coup, but it disrupted the lives of people forced to drop out of school, dismissed from their jobs and jailed on trumped-up charges. The prosecutor's statement accuses 85-year-old retired Gen. Karadayı, who was the chief of General Staff during the coup, and his deputy at the time, retired Gen. Çevik Bir, 78, of plotting to topple the government. Karadayı served as chief of General Staff from 1994 to 1998, at a time when the military put pressure on then-Prime Minister Necmettin Erbakan and his conservative Welfare Party over secular concerns. On Feb. 28, 1997, the military-dominated National Security Council threatened action if Erbakan did not back down. He resigned four months later, whereas the Welfare Party and its successor, the Virtue Party, were banned by the Constitutional Court in Jan. 1998 and June 2001.

Members of the Women and Democracy Association (KADEM), one of the few women's nongovernmental organizations monitoring the trial, made a press statement on the sidelines of the trial, calling for "a just punishment" for the defendants and other perpetrators "to be immediately tried for being a part of the process," in reference to media outlets, journalists, members of the judiciary, bureaucrats and nonprofit organizations that directly or indirectly helped the witch hunt. Media outlets played a prominent role in paving the way for the coup by incessantly provoking and misinforming the public through the use of systematically organized propaganda to create an atmosphere of fear. TV channels and newspapers were awash with fake news painting Muslims in a negative light, showing them either as sex-obsessed fanatics, as in the case of Müslüm Gündüz, a religious sect leader caught in bed with a follower on live TV, or as people bent on imposing religious fascism. As stern warnings from the putschists piled up ahead of the coup, the media lent all-out support to the military, calling it to overthrow the government.

"The Feb. 28 process is a shameful chapter in our history. It was a time of cruelty and oppression targeting democracy, freedoms, basic rights and society's values," activists said in a statement. They also said: "Countless women were forced to remove their headscarves in persuasion rooms," referring to the practice at schools and other public institutions where women who were not allowed to wear headscarves faced veiled threats by professors and other high-ranking civil servants. "Their right to education was violated and they lived some sort of exile life, forced to study abroad. Women were not allowed to pursue a career while preserving their identity. This left deep scars in people," KADEM activists said.

Justice and Development Party (AK Party) Deputy Ravza Kavakçı Kan was among those watching the trial. The sister of Merve Kavakçı, a lawmaker expelled from Parliament for wearing a headscarf two years after the coup, Kan said she knew that "justice will prevail" for the defendants who will "account for parading tanks," referring to an infamous incident 24 days before the military ultimatum to take over the government. A parade of tanks in Ankara's Sincan district whose mayor was a target of the secular elite for his reactionary activities is viewed as the putschist generals' show of force. Kan said that along with the military, media outlets fuelled the coup with biased coverage. "By God's will, everyone who contributed to this process will be punished by the court," she said.