Admirals, others sentenced to life for FETÖ's 2016 coup bid 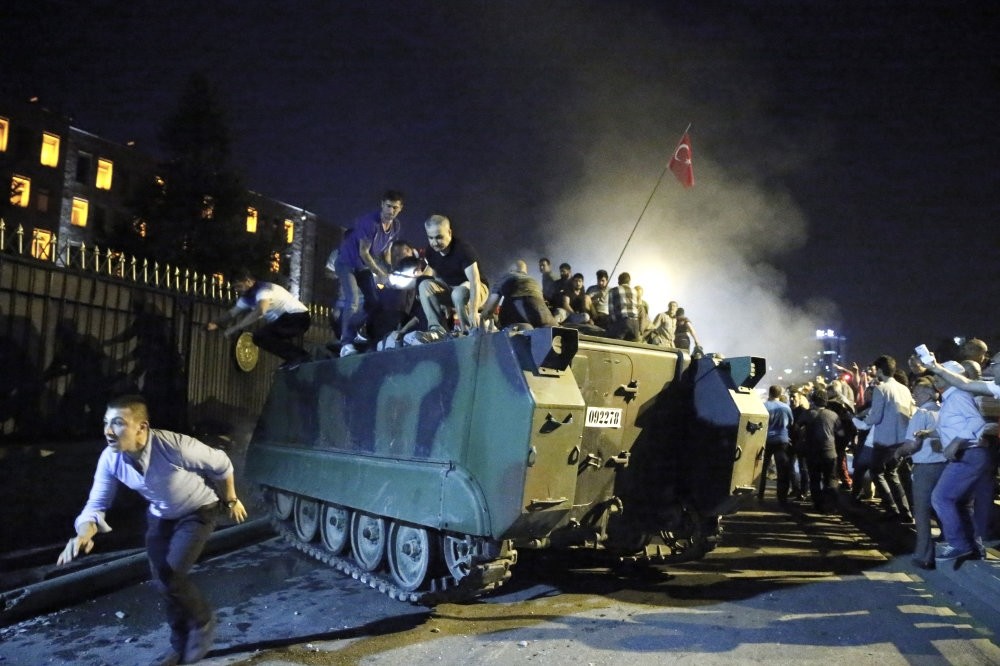 Anti-coup civilians protest against the coup attempt and surround a tank at military headquarters in Ankara on July 15, 2016.
by Daily Sabah Mar 07, 2018 12:00 am

In the latest verdict against putschists involved in the 2016 coup attempt blamed on FETÖ, an Ankara court handed down life sentences to two former admirals and 63 others for their roles in taking over the Naval Forces headquarters

A court in the capital Ankara Tuesday handed down aggravated life sentences and ordinary life sentences to 65 people, including two former admirals, for their roles in the July 15, 2016, coup attempt.

The men were among 73 defendants accused of taking over the headquarters of Naval Forces Command during the coup attempt blamed on the military infiltrators of Gülenist Terror Group (FETÖ).

Eight other defendants, including three who are still at large, will be tried in a separate trial for involvement in the coup bid at the Command's headquarters in Ankara.

The chief suspect in the case was Brig. Adm. İrfan Arabacı, who was serving as deputy director of Operations department of the Naval Forces Command at the time of the coup attempt. Arabacı was captured after he went into hiding days after the coup attempt failed. Along with him, the prosecutors also indicted Brig. Adm. Murat Şirzai. Both men were initially dismissed from the military following the insurrection bid that killed 249 people across Turkey.

The Naval Forces Command was among few places where clashes between pro-coup and anti-coup groups took place but the defendants are accused of joining the nationwide attempt.

Trials of other senior officers in the Naval Forces are still underway and they are accused of coordinating vessels to aid the putschists.

Bülent Bostanoğlu, the commander of the Naval Forces and a plaintiff in the case, escaped a likely abduction as he was not in the headquarters during the coup bid.

Top military brass, including Chief of General Staff Gen. Hulusi Akar, were kidnapped by putschists and held in an Ankara airbase controlled by pro-coup troops for hours before they were rescued.

During the coup bid, Bostanoğlu was in Istanbul to attend a wedding. When he found out a coup was underway, he skipped the event and drove around the city to avoid being captured by the putschists.

The commander has told investigators that he frequently changed locations and coordinated anti-coup action with his subordinates on his cellphone. He was the highest-ranking officer to announce that senior cadres of the army did not take part in the coup attempt when he phoned a TV station that night.

Thanks to a strong civilian resistance, the help of law enforcement and anti-coup troops, the attempt was quelled in the early hours of July 16, 2016.

Bostanoğlu is also credited with preventing putschists from taking control of 24 warships. Officers loyal to Bostanoğlu took the vessels to port and secured them.

Dozens of coup trials are underway all across the country since December 2016 and hundreds of pro-coup officers have received life or lesser sentences in trials.

After the coup attempt was quelled, authorities detained or arrested thousands, mainly military officers, linked to FETÖ. Operations against the terrorist group are still being held on almost a daily basis.

Last week, 10 former officers were sentenced to life for an attempted takeover of a main road connecting Istanbul's Asian and European sides.