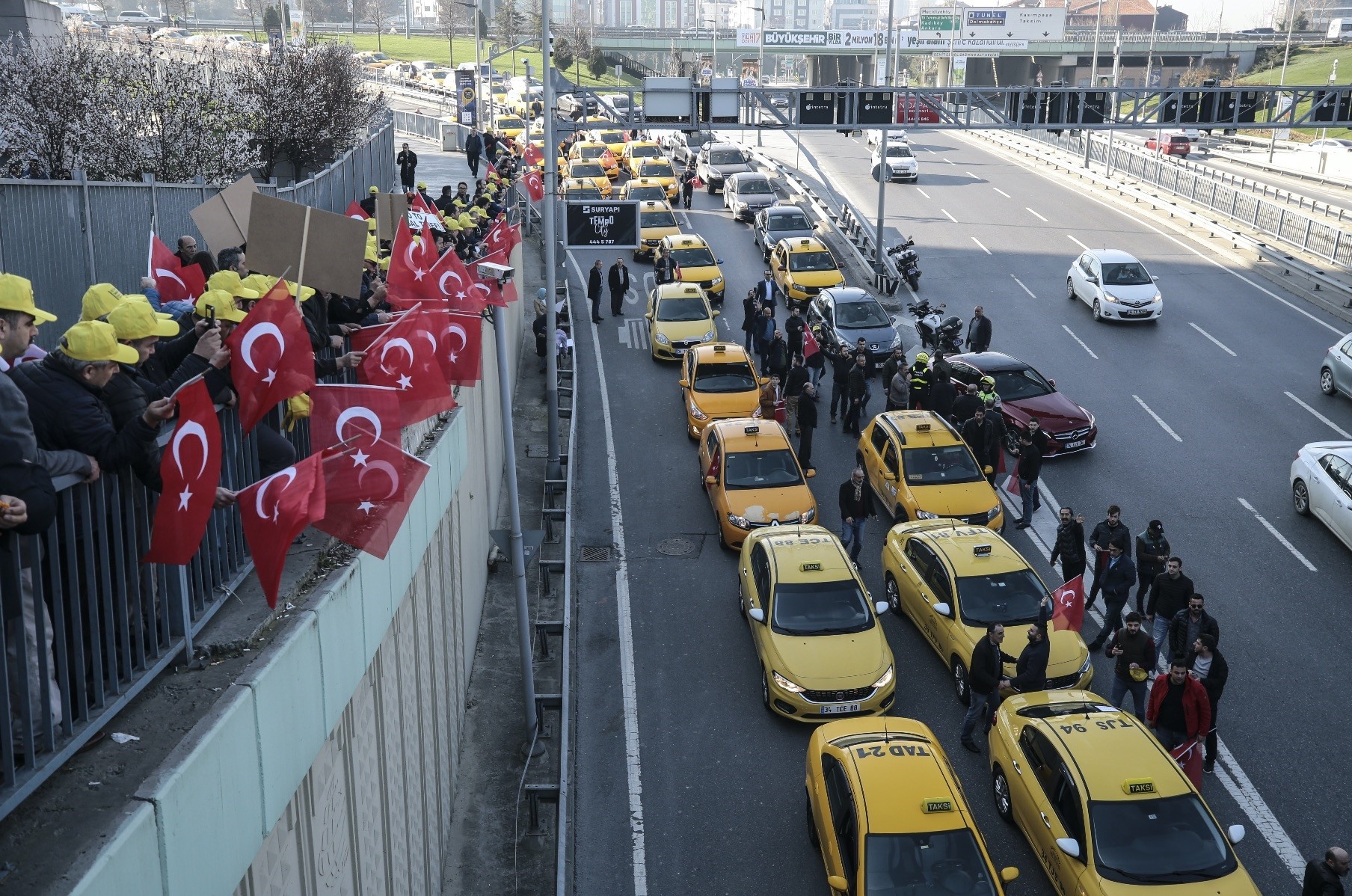 Taxi drivers gather outside the Istanbul courthouse hearing the trial.
by Daily Sabah Mar 13, 2018 12:00 am

Its cars are cleaner, newer, their drivers are polite and they are not trying to scam their fares, unlike regular taxi drivers. This is the argument of social media users who launched a hashtag "Don't Touch Uber" yesterday as the international ride-hailing platform faces a trial in Istanbul. On the other hand, taxi drivers in the city - the only place Uber operates in Turkey - claims Uber is illegal and hurts the competition.

"They operate taxis. They openly carry passengers but don't have any license to do it," Eyüp Aksu, head of a taxi drivers' chamber and co-plaintiff in the trial against Uber, told reporters outside an Istanbul courthouse. He was accompanied by hundreds of drivers wearing yellow caps and waving banners denouncing "global thief" Uber. As some in the crowd hurled plastic water bottles at a passing black car they claimed to be "an Uber car," Aksu called on authorities to ban Uber in Turkey.

"We have fought against unlicensed taxis for years, and Uber runs such a pirate taxi scheme. They exploit loopholes to operate freely," he claimed. Aksu defended that it hurt the transportation sector and deprived Turkey of significant tax revenues.

Owners of commercial taxis are required to pay millions for a taxi license, while Uber acts only as an intermediary between drivers and customers and is not obliged to pay additional taxes.

Yesterday's trial was adjourned to June as the court ordered an expert witness report on how Uber operates, and whether it necessitates a ban.

Taxis are a good choice for getting around in Istanbul, known for its notorious traffic, but drivers often receive complaints about fares, especially from foreigners claiming they were overcharged. In a recent case, prosecutors have asked for 10 years in prison for a driver who scammed a Saudi tourist by giving him a lengthy ride across the city instead of taking the tourist to Sabiha Gökçen airport, a short distance from tourist's hotel.

Ahead of the trial, two incidents involving Uber drivers highlighted an escalated threat from taxi drivers. In one video circulated online, a group of men - taxi drivers according the caption - are seen surrounding an Uber vehicle they had called, threatening the driver before hitting him. Another Uber driver shared a video showing a commercial taxi blocking his way while he was carrying customers, and taxi driver attempting to slash an Uber vehicle's tires.